Ahead of Coach’s first ever menswear show, creative director Stuart Vevers speaks to BoF about the brand’s fashion strategy. 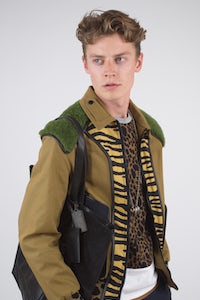 Ahead of Coach’s first ever menswear show, creative director Stuart Vevers speaks to BoF about the brand’s fashion strategy.

LONDON, United Kingdom — In north London’s Omega Street, just off King’s Cross Bridge, the Coach design team is preparing for the first men’s fashion show in the brand’s history, set to take place this Saturday at London Collections: Men. Inside a cavernous white space, tables covered with psychedelic surf-print sliders and composite-print high tops with flashes of tiger stripes and green soles, are surrounded by rails and rails of utilitarian workwear in off-beat colours.

Considering the show is only days away, the studio is exceptionally calm, punctuated only by gentle Balearic beats and the snap of a camera shutter, as models are cast and styled by Karl Templer at the back of the room. “We’re just trying everything on and seeing what we like,” said Stuart Vevers, the creative director of Coach. “Day one is always calm.”

Calm the studio may be, but Coach’s recent financial results have been rather more turbulent. On an earnings call last August, Coach chief executive Victor Luis described fiscal 2014 as a “challenging year” for the American leather goods and accessories behemoth. Just two months prior, the company had announced the shuttering of 70 stores, representing 12.5 percent of its North American retail network. Seemingly caught off guard, Coach had suffered in the face of competition from ‘accessible luxury’ players like such as Michael Kors, Kate Spade and Tory Burch and slow sales had forced the brand to shift a large volume of its sales to factory outlets, undermining its premium positioning. “The competitive landscape has shifted and we have not responded effectively," Luis admitted at the time.

Now, in an attempt to win back market share, the brand is turning to fashion and adopting a new lifestyle branding strategy. “A successful apparel range will be vital in establishing Coach as a lifestyle brand, while adding to the bottom line,” said Bernadette Kissane, an apparel and footwear analyst at Euromonitor.

In 2013, Coach hired the British designer Stuart Vevers, who was instrumental in Mulberry’s early success, before moving to Loewe. “I guess for me what I found appealing about Coach when I was first contacted was that there is this absolute desire for change. I think my role is about being part of the reset of Coach; it is about rethinking it and bringing on all the things that we feel are good about the brand, but then correcting a lot of the other things — changing things and not being afraid to,” said Vevers.

“You create a character, a personality for the brand, a point of view. A way to differentiate yourself and that’s a big part of why we are working with different product categories, because it’s an interesting and immediate way to tell your brand story and explain why you’re different. Also, I think in a really fundamental way it’s like, ‘Come and look at what we are doing this season, our new collection.’ I think it’s really instant,” continued Vevers.

The brand has already shown two womenswear collections at New York Fashion Week. Coach also presented a men's collection in London last January. But this Saturday will see the brand make its first major move into menswear with a full-fledged show at London Collections: Men.

Coach’s men’s business currently represents 14 percent of the company’s revenue; it has steadily climbed from $100 million in annual sales in 2010 to $700 million in 2014. And, in the coming two to three years, Coach expects is menswear to generate $1 billion in annual turnover. “A lot of what we are exploring with Coach men’s is how do you get the guy who is not embracing fashion on board — that is going to be the access point to a new market, a new customer. We talk a lot about the psychology of shopping and guys and I think for a brand of the scale of Coach it’s important,” said Vevers.

In addition to ready-to-wear, Coach also plans to tap men’s outerwear, shoes and jewellery. “Outerwear felt immediately like a place that made sense for Coach as a leather goods brand. Shoes was another one. Again, it is a new product category and it can begin to change the perception of Coach,” said Vevers. “In a way, we are doing what instinctively feels right as product categories and part of that is asking whether things are believable as a Coach product.”

But creating men's fashion products that are believably Coach may prove to be a challenging task. “Coach is still heavily associated with accessories — in particular women’s handbags — and the brand will need to work hard to overcome this perception,” said Kissane.

But as it moves into fashion, Coach has no intention of abandoning its traditional value proposition, unlike Mulberry, which aimed (and failed) to reposition itself as a luxury brand. “I think a lot of people thought when I was brought in, because of my background, because of the word ‘lifestyle’ and ‘ready-to-wear’ it meant a complete departure from Coach’s value proposition and it was never the case,” said Vevers. Bags from the new menswear collection will range in price from $450 to $895, with footwear ranging between $200 and $400 and outerwear between $695 and $2,500.

One area in which the company has notably changed tack, however, is distribution. With over a thousand own-brand stores, Coach has traditionally focused on a direct retail strategy. But as the brand has entered the fashion market, it has begun to build a network of key wholesale accounts, including Mr Porter, Selfridges, Galeries Lafayette and Opening Ceremony, which will stock the forthcoming Coach men’s collection in women’s sizes.

“When we started to present these collections as more separate entities we hoped we would get some interest from [the] wholesalers we like and we probably had a wish list going in to it, but it wasn’t a calculated route. It’s about creating great relationships,” said Vevers. “As a designer it’s exciting for me to work and be able to explore some unique propositions and exclusives — and yes, there’s definitely a branding piece there. It was great when these stores made contact. It felt like we were doing things right.”

“We were impressed by Coach for Autumn/Winter 2015 and will be carrying the collection across our menswear, womenswear and accessories categories,” said Bosse Myhr, director of menswear at Selfridges. “Vevers' translation of luxury will work for our customer — it's accessible luxury in the sense that the pieces are all so considered, well executed and wearable, especially the outerwear, which is some of the best in class for the season. I think the [menswear] collection will appeal to a consumer looking for high spec, robust clothes that are different, but easy to wear."

International expansion — especially in China — is also crucial to Coach’s plan. “China is very important; the collection will be available for Fall in 22 stores in Greater China, which currently accounts for over a quarter of sales,” said a company spokesperson. “I’m really conscious that we are a global brand and often our client isn’t American,” added Vevers.

Ultimately, in order to succeed, “Coach has got to be totally accepted for great quality, cool, modern pieces,” said the designer. “That’s got to come from a balance of great value, fashion credibility and being true to what the brand is.”