NEW YORK, United States — At the Met Ball held earlier this month in New York, singer and songwriter Katy Perry walked the red carpet in a gown made from silk chiffon and over 3000 glowing LEDs that changed colour from blue to pink to yellow to green. Created by London-based firm CuteCircuit, Perry’s gown assured her a lot of publicity. But the coming integration of fashion and technology is about more than making a visual statement.

What if a jacket could heat or cool according to the current weather, or a cocktail dress could help monitor and control your well being? Science fiction-sounding innovations like these are the potential output of the small, but growing field of “smart fashion” that’s being pioneered at university labs and start-ups across the world.

Smart fashion often begins at a level that’s imperceptible to the human eye. Advances in nanotechnology, which allow manufacturers to control materials on a molecular scale, have enabled researchers to develop smart textiles: fabrics that have embedded technology, but are able to maintain normal appearance and feel. For example, “carbon nanotube-coated yarn” is able to conduct electricity, while remaining pliable and soft, allowing clothing made from it to transmit information or power small electronic devices.

Indeed, at Cornell University’s 2010 Design League fashion show, Abbey Liebman showed a solar-powered dress with ultrathin flexible solar cells connected via conductive cotton yarn to a USB charger that allows the wearer to power a mobile phone or iPod. The cotton fibres used to make the dress were coated with a combination of semiconductor polymers and nanoparticles, but amazingly, the garment feels and moves exactly as if it were made of regular cotton.

Cornell University is also exploring cotton fabrics made of nanofibres that change colours, while a project called Communication Wear, funded by the UK-based Arts and Humanities Research Council, has resulted in Bluetooth-enabled garments that sync with a wearer’s mobile phone and emit “sensory messaging” based on his or her body movements.

But will smart fashion and textiles like these ever make their way to official fashion weeks and mainstream consumers? “We will definitely see these items on the catwalk,” said Sabine Seymour, CEO of Moondial, a company developing “fashionable wearable technology,” pointing to Hussein Chalayan’s collection for Spring Summer 2007 which included dresses that were able to transform in shape and style, driven by a sophisticated computer system.

Indeed, in recent years there has been growing cooperation between the worlds of fashion and technology. Back in 2007, Zegna launched a solar-powered jacket, available at mainstream retailers like Saks Fifth Avenue, that warms the wearer and generates enough energy to power a mobile phone or an iPod. 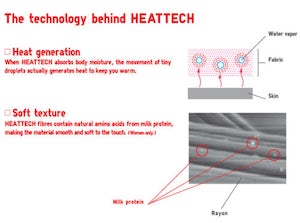 The technology behind Heattech 1 | Source: Uniqlo 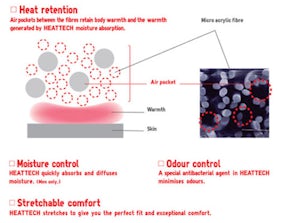 The technology behind Heattech 2 | Source: Uniqlo

We’ve also seen innovation at the lower end of the market. Also in 2007, Uniqlo launched Heattech, a line of technologically sophisticated long underwear developed in strategic partnership with Toray Industries, a materials company in Japan. Woven from hollow fibre thread, the Heattech garments are engineered to actually generate warmth as they absorb moisture and trap pockets of warm air, insulating your body much like a heavy wool, but without the bulk. Milk proteins, containing natural amino acids, were also added to the fibres to create softness. Last winter, Uniqlo’s Heatteach was the best selling line for the wildly successful retailer, with an estimated 50 million items of Heattech thermal wear sold in the run-up to Christmas

One of the world’s largest luxury fashion groups is also exploring the future of smart fashion. In order to “facilitate technology convergence in textiles and improve the interface between science and design,” Gucci Group is currently amongst the companies supporting the Textile Futures Research Group at the University of Arts in London.

So will Gucci be the first major luxury group to launch a fashion line that leverages wearable technology and smart textiles? Stay tuned.

Research for this article was contributed by Hanne Melin.