In some ways, Golden Lane, which is inspired by the architecture and cultural life of the area around London’s Barbican, is a strong departure from the dark, masculine look of Chris & Tibor. The brand’s first collection features a colour palette of cool peppermint green, flaming red and candy pink, as well as midnight blue, tan and black, splashed over a structurally unique, satchel-style bag shape with two split compartments and gold trimmings.

But like Chris & Tibor, Golden Lane offers products that are designed, first and foremost, to be useful. Indeed, the signature twin compartments of the brand’s bags serve a purpose that is functional as well as aesthetic.

“The two separate compartments make the bags very versatile and practical,” said Liu, the creative mind behind the brand. “An accessory can’t cross the line. It must play the supporting role. You have to be aware of ready-to-wear trends. But the bag should compliment the clothes, not overwhelm them!”

Liu, who earned an MA in fashion design from the London College of Fashion, and Matyas, who studied art management and marketing, both worked as design consultants at British megabrand Burberry before launching their own business. “At the beginning we definitely clashed,” chuckled Matyas. “I am not a trained designer, but I am interested in fashion. So whenever Chris brings up an idea, I always give my opinion. Sometimes he agrees, sometimes he gets annoyed.”

“As a trained designer, I look after creative side but I also have a strong commercial side,” added Liu. “It’s a partnership. We have learned to work together and bring out the best in each other. That’s how we push the business… Golden Lane followed a business strategy from day one.”

Indeed, before launching Golden Lane the duo spent nine months in product design, development and market research. “The entire exercise helped us achieve amazing insights into our customer,” said Matyas. “She is typically aged between 25 and 34 years old and compared our first prototype bag to Alexander Wang, followed by Marc by Marc Jacobs and Mulberry. It was a good sign for our brand,” he continued. “An astounding 85 percent [of research participants] said [Golden Lane] was a practical bag.”

The focused approach appears to be paying early dividends. In its first season, Golden Lane has already been picked up by Barneys New York, Luisa Via Roma and Shopbop. 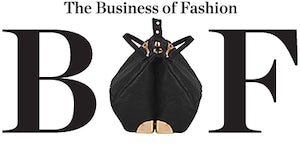 For this month’s Spotlight, Liu and Matyas have designed a custom BoF logo featuring Golden Lane’s Duo Satchel Lavato bag. “We wanted to show off the structural uniqueness of the bag,” they said.

As for the future, Liu and Matyas are already planning their next move: a collection of scarves. “The idea is to launch parallel brands under the same team and management,” explained Matyas.

The Spotlight is BoF’s showcase for emerging talent employing creativity and business acumen to make their mark in the fashion business. Shweta Shiware is a freelance journalist based in London.