As Hermès opens a revamped London flagship with a men’s space covering half the ground floor, BoF speaks to the brand’s head menswear designer Véronique Nichanian.

PARIS, France — It was Jean-Louis Dumas, the former chairman and artistic director of Hermès, who, in 1988, gave Véronique Nichanian carte blanche to “set up her own little business” creating men’s clothing and accessories for the company, where she has worked for the past 27 years.

Hermès declined to reveal sales figures, but the layout of its recently revamped flagship on London’s Bond Street is a testament to the performance of the brand’s men’s offering: men’s clothing and accessories (including a dedicated men’s shoe salon) cover about half the ground floor. “Given the key role that London plays in the success of Hermès men's universe collections, the newly renovated Bond Street store deserved a significant men's space,” says Bertrand Michaud, managing director of Hermès UK.

An elegant man always needs to be decoded.

Back in Paris, in a bright, airy office overlooking Rue du Faubourg St Honoré and Rue St Honoré, where Nichanian has been based for years, calmness and clean lines prevail. “I like men's mannerisms, the way they can be driven by refinement,” she says, dressed in a masculine uniform of tailored pants, a white shirt and a pair of Derby shoes.

“Details say a lot about a man’s choices: watches are a masculine take on jewellery. Like shoes, they are signs of elegance,” she continues. “Non-ostentatious details are key to men’s allure whether they collect sneakers or bespoke shoes… An elegant man always needs to be decoded.” As an example of how she builds this idea into her collections for Hermès, Nichanian points to the brand’s shirts, which feature a clou de selle on each wrist, a modern reinterpretation of the cufflink and a discreet link to Hermès’ heritage as a saddle maker, imbued with meaning for those in the know. 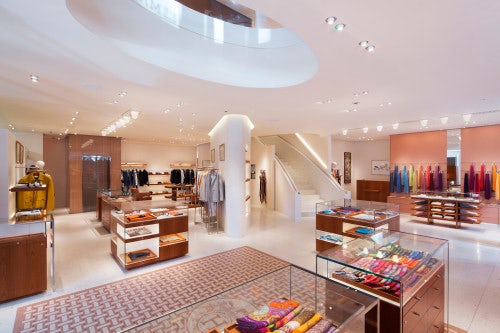 Over the years, Nichanian has built a collection of profiles of inspiring men, which inform her work. “They are explorers and maharajas, aristocrats and poets, hippies and classical portraits. The most recent addition is a portrait of Frédéric Bazille by Renoir.”

Nichanian sees her status as one of the sole women designing luxury menswear as an asset. “I am not as hard on them as my male colleagues. I am not their rival. I don't want to force them into a given style. Designing menswear shouldn’t be about caricaturing them.”

Bespoke services are a key component of Hermès’ expanded men’s offering in London. “London is the temple of men’s fashion, isn’t it?” says Nichanian. “Whether dandy, excessive, colourful or tailored, the very nature of menswear in the British capital is fascinating — they want their names embroidered, or sometimes they have a specific wish. The atélier is there to design unique pieces with paper-thin leather or crocodile chiffon.” 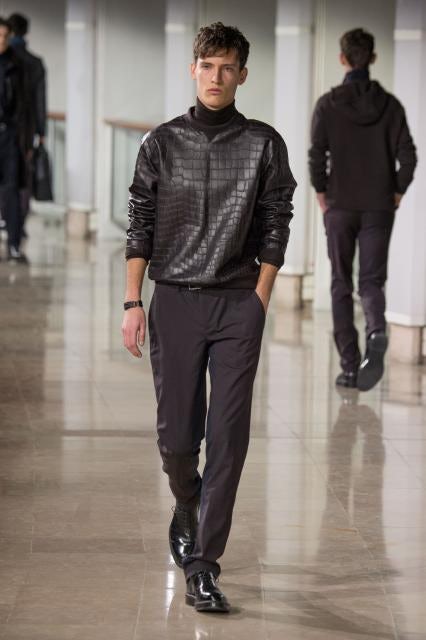 Nichanian aims to push Hermès forward without losing touch with its core DNA. “Confronting materials, revisiting styles and inviting artists to bring their spark, such is my definition of modern luxury,” she says. For her autumn/winter 2015 men’s collection, Nichanian played with a high-low mix, uniting exquisite materials with casual silhouettes, resulting in bomber jackets in crocodile leather, tracksuit pants in glossy calfskin and baggy pants in shorn mink. She plays close attention to finish too. “I believe in building a look around the most refined details that are best seen by the wearer, like a cashmere piece with waxed leather borders.”

“Luxury needs to be redefined through innovation! I am always on the look out for new textures,” she says. “I've tried to work with horsehair for example and you would think it is easy, but the fibres are so short and brittle that it almost makes it impossible. Another moment, I felt I wanted to experiment with stretch linen, but it didn’t exist, so we invented it by mixing linen with elastic fibres. Fifteen years ago, I also crafted a collection out of washi paper, or mixed neoprene with shorn mink.”

“Staying modern is a day-to-day job, one that forces you to juxtapose the old with the new.”