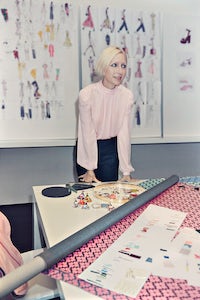 NEW YORK, United States — Nicola Glass never met Kate Spade. But since November 2017, the moment Glass was appointed creative director of Kate Spade New York, its namesake has been a constant in her life.

In January, when Glass, a 13-year veteran of Michael Kors, arrived at the Tapestry-owned Kate Spade — which generated $1.3 billion in its most recent fiscal year — she immediately went back to the beginning, when Kate Spade, in 1993, dreamed up the design for a chic, sensible, not-too-expensive, not-too-precious shoulder bag and her partner Andy Spade marketed the hell out of it. Glass pored over earlier campaign images shot by Tim Walker. She ruminated on how she could tease out early brand signifiers — the spade logo itself, the fabric label — and modernise them.

Then, just as she was finishing up the designs for her first ready-to-wear collection, set to debut on Friday, September 7 at New York Fashion Week, it happened. On June 5 2018, Kate Spade took her own life at age 55. Spade’s suicide, which happened the same week as that of writer and chef Anthony Bourdain, was national news in the United States: her impact on culture — not only as a pioneering designer who established one of the first accessories-rooted fashion brands, but as a female entrepreneur — clarified. While the Spades sold their remaining stake in the label more than a decade ago and have not been involved since, the designer’s identity is unmistakably intertwined with the company she created.

At first, Glass felt “slightly overwhelmed” by that notion, combined with the onset of a new sense of responsibility. So, she spent time reading stories and tributes. But she said that, while the spring line was already designed before Spade’s passing, “I didn't feel the need to change course. I had already been inspired by what they did.”

For her New York Fashion Week debut, Glass will nod to those early Walker campaigns. There is one image in particular from the Spring 2006 campaign — where the model is walking on yellow line in the middle of an open road, mirrored by strip of yellow paint going down the back of her dress — that will be referenced on the runway.

“I really love some of the old ads because there’s this very spirited woman in them,” she said. “Metaphorically, for me, it’s about starting this journey at a brand where, before I could move forward, I really looked backwards first. Not to repeat the past, but to be inspired by the core foundation of the brand. There was a purity about design approach that really appealed to me.”

But as powerful as that image may be, it’s important to remember that the company Glass walked into is very different than the one Spade exited in 2007. The architect of the brand’s second coming was Deborah Lloyd, who joined in November 2007 and is widely credited with commercialising Spade’s retro-tinged patina: While Spade teased the 1960s cocktail party hostess, Lloyd truly embodied her.

Lloyd turned Kate Spade New York into a lifestyle brand that capitalised on life stages, starting with sweet 16 or high school graduation (when a girl might receive her first Kate Spade bag), moving into college formals (to which she might wear a Kate Spade dress) and even into wedding registry territory (where Kate Spade dinnerware, bedding and stationery come into play).

Handbags continue to be the leading driver of sales — making up 55 percent of the business in 2017 — but the brand’s other products often more strongly reflect the novelty for which Kate Spade New York is now synonymous. In May 2017, American fashion conglomerate-in-the-making Tapestry, then known as Coach, Inc., bought Kate Spade New York for $2.4 billion, betting that there was plenty of room for it to grow.

But in recent years, many of the brand’s tropes have grown tired. It was clear that, once the Tapestry deal materialised, changes would be made in the leadership at Kate Spade New York. First, chief executive Craig Leavitt — who had been with the company since 2008 — exited in August 2017. Just months later came Lloyd’s departure.

The Northern Ireland-born Glass, a former Gucci handbag and jewellery designer with roots in jewellery — who holds a Master of Arts in fashion accessories from the Royal College of Art — was uniquely positioned to succeed Lloyd. For one, she had been working on the company’s biggest competitor — Michael Kors — since 2004, most recently as senior vice president of accessories design, overseeing both Michael Kors collection and Michael Michael Kors (in charge of both the class and the mass).

However, she lacks experience in clothing design and image-making, which is perhaps why she has chosen to stage a runway show this New York Fashion Week, moving away from the engineered-for-Instagram presentations favoured by Lloyd. “I wanted the focus to really be on the product, less about what was going on around it,” she said, adding that she wanted to see the clothes move.

In January, the first advertising campaign overseen by Glass will debut, and by February new stores will begin to open featuring her retail concept. She has already begun making subtle cosmetic changes: plumping up the spade in the brand’s signature motif, tweaking the font on the logo, creating a new “colour sensibility” that is grounded in hot pink and dark green, with hits of chartreuse and pale lilac.

“The brand is known for being very colourful, but I felt there was this opportunity to really explore it in a more unexpected way,” she said. While Glass said she has “always been jealous of the packaging,” in Kate Spade stores, she’s updating it by injecting more primary colours.

Saturated resin display sets and dark green cases populate the showroom, while lilac paint — Farrow & Ball’s “peignoir” — covers the walls. (It’s the same colour she used in her own bedroom.)

Of course, slapping on a new layer of paint does not a transformation make. Glass has the tricky challenge of delighting Kate Spade New York’s current contingent while attracting a new one. Sales are shrinking, which Tapestry attributes to a pull back on discounting and promotions — like flash sales — and the restructuring of its wholesale partnerships. However, in the fourth quarter of fiscal year 2018 the brand’s decline slowed: comparable-store sales were down just 3 percent. (Analysts expected the dip to be more like 7 percent.)

While unsolicited attention accounts for some for this — certain styles sold out in the days following Spade’s passing —analysts believe it could be the marker of a turnaround.

"In our view, the brand is now in a better position and should start making a solid top and bottom line contribution over the next fiscal year," Neil Saunders, managing director of GlobalData Retail, said in a note to investors.

In March 2018, Glass was joined by former Michael Kors colleague Anna Bakst, who replaced Leavitt as chief executive. As president of Michael Kors footwear and accessories, Bakst and Glass have worked together closely in the past, and together they will be responsible for plotting the brand’s return to growth. "Tapestry is handling the business aspect by putting less of it on sale, making people respect it as a full-price brand," Cowen & Co analyst Oliver Chen told BoF. "The other component is balancing the art and science; creating relevance."

They will also need to continue to manage the relationship between the late designer’s legacy and the brand’s current incarnation.

So, how will Glass manage to make Kate Spade New York her own? Kate Spade, the woman, was cool: She wore Sacai; she collaborated with ThreeAsFour on what is known as the “Circle” bag. Under Lloyd’s watch, the brand became deeply uncool, if more accessible.

Glass would like to elevate things a bit, adding a layer of sophistication inspired by her own personal aesthetic. (On the day we meet, she is wearing a covered-button cream silk dress from Karl Lagerfeld-era Chloé with accessories from Kate Spade New York, including a surrealist lip ring that recalls a print from the collection.)

While a survey of the Spring/Summer 2019 collection reveals considerable vintage appeal, the “light” references recall the 1940s and 1970s rather than the often-mined 1950s and 1960s. Textiles are the thing: a painterly floral silk, a matchstick print, jumbo broderie anglaise in contrasting chartreuse and lavender, all done up into pretty, easy-to-wear dresses that offer clever, nearly subtle novelties. For instance, look close at the centre of an illustrated daisy and you’ll spy a set of lips.

It’s still colourful, joyful, but there are more separates, more knitwear and less stuffiness — even some sensuality. Although prices will remain in line with previous collections.

“I want to bring this sense of ease to the ready-to-wear, for it to become more modern and less retro. And to have a little bit of tension as well between feeling more sophisticated and, at the same time, more youthful,” she said. “My goal was to create something that would appeal to our current customer, but to push her in a new direction to explore new silhouettes.”

Hit commercial bags have too been updated. Glass seems to prefer curves over sharp edges, so she’s rounded out some of the classic styles, updating some with softer or more textural leathers. On fashion-driven pieces, she’s using the spade as a visual device, either for clasps, or woven or embossed into the leather. The new designs trickle down to entry-price items like iPhone cases.

Analysts are bullish on the approach, which could be an overall boon to Tapestry if executed properly. "We think that they have a really strong team in place, which is refining the brand story," Chen said. "Kate Spade brand has always been a powerfully differentiate brand. It’s working from a position of strength."

However, Friday’s runway show will be the first real litmus test, where Glass will have the opportunity to read the crowd and see if what she has been dreaming up resonates in the way she believes it will: “I’m very lucky, frankly, to be in this position.”