In recent years, Goldberg’s irreverent, laidback love of quirky sweatshirts, bright colour and mismatched sneakers has earned her the praise of fashion magazines and blogs as mainstream trends have turned towards comfort and meme-friendly nonconformity.

A New York Fashion Week front row regular, Goldberg has worn everything from Vetements on The View to Thom Browne on the red carpet, much to the delight and appreciation of the online fashion community.

“For me, the idea has always been to be comfortable,” she told BoF. “And it’s the craziness of me wearing socks with high heels because I like to have socks on my feet when I wear high heels. Now everybody does it.” 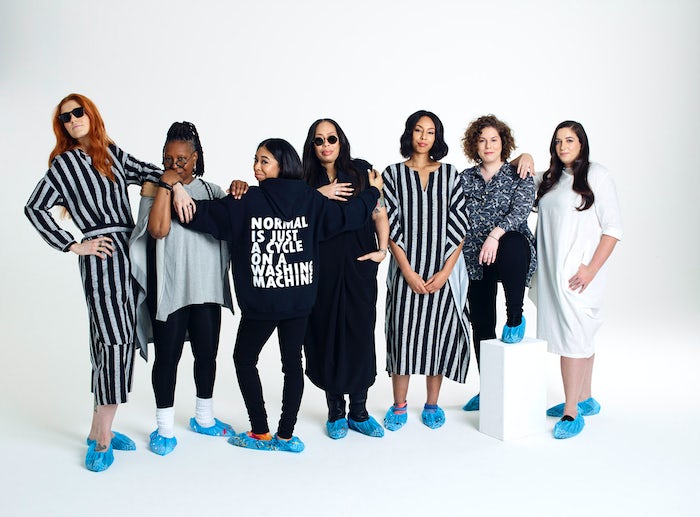 Now Goldberg is capitalising on the fashion moment by turning her unique sensibility into a size-inclusive contemporary line of comfortable, graphic separates, tunics and dresses. Dubgee launches May 15 on Amazon, Ashley Stewart, Le Tote and Neiman Marcus, with prices ranging from about $90 to $400.

The launch is part of a new push of celebrity-backed lines, which range from simple licensing deals to more involved projects like Gwyneth Paltrow's Goop and Reese Witherspoon's Draper James, where A-listers are finding they can be more successful by exerting more control over brands that become fully fledged businesses.

Goldberg’s business partner on Dubgee is Gary Wassner, the founder of Hilldun, a factoring firm that provides young designers with loans and other forms of credit, and Interluxe, an investment firm. He and Goldberg met in 2015 when they sat together at a Jeremy Scott runway show in New York. The two still attend shows together each season, and he was her partner on the line of kitschy Christmas sweaters they launched in 2016 and will sell again the next holiday season on Zappos and Amazon.

Dubgee is produced in partnership with licensee with The Powell Companies Real LLC, a manufacturing and investment company. In a previous incarnation, when the company was the Bahari Group, it partnered with Tina Knowles and Beyoncé to produce their now-closed dress line House of Deréon between 2007 and 2011.

Wassner said Goldberg is a modern Martha Stewart with a broad appeal. “She really is a fashion icon: she knows exactly who she is, there is no pretending there is nothing phoney about how she dresses,” he said.

Maybe I was ahead of my time. Maybe now is the time.

Goldberg’s enthusiasm for the line is evident. In recent weeks she has worn Dubgee pieces on The View, the daily talk show she has moderated since 2007, and posted about the upcoming launch on Instagram, where most of Dubgee’s marketing efforts will be focused.

“This is as serious to me as anything else I’ve done in my life,” she said, describing fashion as self-expression. “The first thing you should communicate is, ‘I like me.’ I think the motto of the company is, ‘The last thing you should ever fret about is what’s in your closet.’”

The idea for Dubgee came to Goldberg after a summer 2017 trip to Greece, what she described as her first proper vacation in more than 25 years. She wanted to buy “free and flowy” pieces to wear while she was there, but couldn’t find anything.

“I started feeling kind of weird about my body, which is something I had never experienced before,” she said. “And it suddenly occurred to me that if that’s how I’m feeling, maybe other people are feeling the same way.” 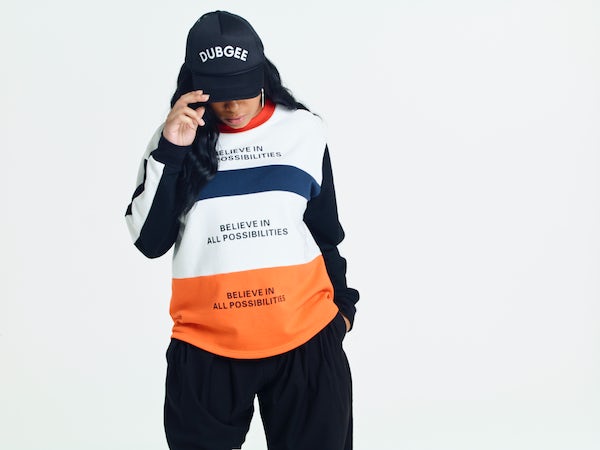 A look from Dubgee | Source: Courtesy

While Goldberg first wanted to create a kit of four pieces tailor-made for vacations, and potentially sold on cruise boats, Wassner encouraged her to think bigger.

“We are making clothes that compensate for all of the issues that have always bothered Whoopi when she’s gone shopping,” said Wassner, referring to details like pockets (deeper), sleeves (wider) and shirt lengths (longer). “That’s a concept that can extend in all categories of clothing.”

Wassner introduced Goldberg to the Powell Companies Real in 2018, because “they were open to Whoopi’s intense hands-on relationship with the design of everything” and didn’t push any certain strategy or approach on her. “They really believe in her perspective,” he said.

“There are a million people who put their name on clothes, you know the ‘Pooky Poo’ collection,” she said. “It’s not a licensing deal to me. I want to wear what we are making. I want to say, ‘Here’s why I love it, here’s why I think you’ll love it.’ I can convince people to take a shot at feeling better.”

Powell Brand President Joseph Boitano said the company wanted to work with Whoopi because she had a passion for the business. “She’s not someone who comes in and goes out, she likes to really be involved,” he said.

Goldberg’s line will also cater to “a woman of a variety of shapes and sizes and incomes” who is underserved in the market, said Boitano, adding that the market opportunity is not just plus size customers, but shoppers “in the middle” who might not be fashion obsessed, but who identify with the way Goldberg likes to dress. “They look at the style of Whoopi and they see ease of dressing,” he said.

Dubgee will offer styles up to a size 3X (the equivalent of a size 22 or 24) and is designed to be flattering and easy to wear for people with all sorts of different body shapes. 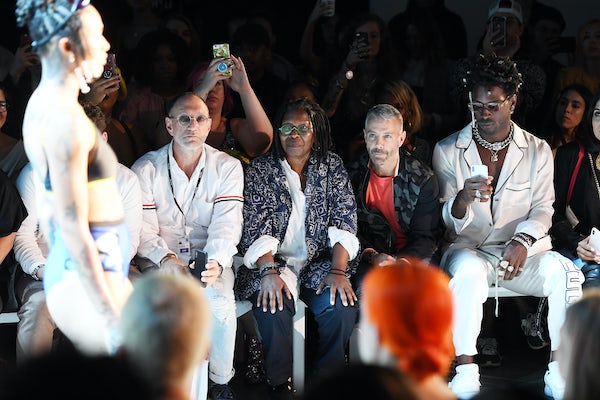 Goldberg said she was particularly inspired by the popular silhouettes of the 1920s and 1930s, when “you couldn’t tell anybody’s size and everybody looked good,” she said. She found geometric designs from those decades that she liked as inspiration, and her granddaughter also painted some of the graphics that she turned into pieces.

Goldberg has ambitions to expand her fashion business: a childrenswear line called Oopi by Whoopi (her granddaughter’s nickname for her) is up next, and she wants to design clothing for dogs as well as home goods. Later this year, she will release a book on entertaining, The Unqualified Hostess, published by Rizzoli.

Goldberg also wants Dubgee to have democratic distribution strategy because it reflects how she shops. “If I’m looking for something, I’ll go to Amazon or eBay or Alibaba or Ashley Stewart,” she said. “If it’s comfortable, I don’t care where it comes from.”

Wassner said they were “overwhelmed” by interest from retailers for Dubgee’s launch, hence the broad variety of partners from Neiman Marcus to Zappos. “It’s very indicative of who Whoopi is — she is high low,” he said. “I don’t think we have to play old school.”

Goldberg’s unusual fashion choices weren’t always so appreciated. After she was criticised by fashion critic Richard Blackwell for wearing a lime green-lined satin jacket over pants to the Oscars in 1993 — in honour of Lucille Ball — the comedian decided to stop caring about what people thought about her style. Even now that her approach earns her praise, she doesn’t take it very seriously.

“I never want to explain why I have something on… Who’s to tell you it’s wrong? Nobody. If I’m happy, leave me alone about what I’ve got on,” she said. “Maybe I was ahead of my time. Maybe now is the time.”