Why Is Under Armour’s Olympic Star Wearing Nike on Sports Illustrated?

Michael Phelps, the crown jewel of Under Armour’s Olympic athletes, is wearing Nike sweatpants, swoosh and all, on the cover of the latest Sports Illustrated magazine. 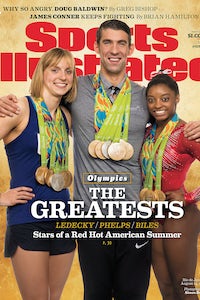 Why Is Under Armour’s Olympic Star Wearing Nike on Sports Illustrated?

Michael Phelps, the crown jewel of Under Armour’s Olympic athletes, is wearing Nike sweatpants, swoosh and all, on the cover of the latest Sports Illustrated magazine.

BALTIMORE, United States — Michael Phelps, the crown jewel of Under Armour’s Olympic athletes, is wearing Nike sweatpants, swoosh and all, on the cover of the latest Sports Illustrated magazine.

In the world of sports marketing, this constitutes a colossal screw-up. Superstar athletes — and their agents, managers, and marketing teams — are hyper-aware of what brands they wear, because they earn so much money from endorsements.

That Phelps, an Under Armour athlete since 2010, would put a competitor’s logo front-and-center on the cover of a national magazine that reaches more than 18 million people has insiders shaking their heads.

“This will go on the wall at Nike,” said Rick Burton, a former US Olympic Committee chief marketing officer. “Under Armour must be going wild behind closed doors.”

Under Armour spokesman Danielle Daly and Peter Carlisle, Phelps’s agent at Octagon Worldwide, said the Olympian was required by the USOC to wear Nike, which sponsors Team USA. Three people with knowledge of the shoot said there was no such requirement.

The USOC did not immediately respond to a request for comment.

Carlisle, the architect of the athlete’s multimillion-dollar endorsement portfolio, pointed out that there are reams of complicated rules and contracts that govern what Olympic athletes can wear, and when, during the games. “It is always challenging analysing, interpreting, and managing the myriad rules and regs with which the athletes are told they must comply, with their eligibility at stake,” said Carlisle, who was said to be at the photo shoot.

If Phelps had to wear Nike, he didn’t do a very good job. A behind-the-scenes video from the shoot shows him wearing Under Armour shoes and what appears to be a Ted Baker polo. He shares the cover with Katie Ledecky, who in the video has on Nike shorts and shirt, and Simone Biles, who is sporting the Under Armour singlet that USA Gymnastics wears in competition, though she is personally sponsored by Nike. The logos on Ledecky’s and Biles’s clothes aren’t visible in the cover photo.

The photo session took place at the Main Press Centre in Barra Olympic Park and lasted just 15 minutes, according to a person who was there. Phelps had come from an official USOC press event, where he would have been required to wear Nike. The Press Centre is also an official Olympic venue, which might have added to the confusion.

Of the roughly 40 people who attended the shoot, at least three were with Phelps. No one commented on the Nike pants.

“Somebody fell down, especially when you’re the most decorated athlete in Olympic history,” said Howe Burch, a former marketing executive for Reebok and Fila.

Sports Illustrated declined to comment, and the photographer who shot the cover did not respond to an e-mailed request.

The Time Inc. magazine reaches 18.2 million people, and Nike will get about $453,000 worth of brand exposure, according to sponsorship and analytics firm Apex Marketing Group Inc. It also reaps the benefit of Under Armour’s embarrassment. The companies frequently compete to sign athletes like two-time NBA MVP Steph Curry, a former Nike athlete who has blossomed with Under Armour.

The International Olympic Committee is notorious for its vigilance in protecting the exclusive rights of the companies that sponsor the games. The USOC has a deal with Nike, which means US athletes must wear Nike in medal ceremonies, at press conferences and other official Olympic functions.

Star athletes, sensitive about protecting the companies that endorse them, often find creative work-arounds. When Nike pitchman Michael Jordan draped an American flag over his shoulder during the 1992 gold medal ceremony, it was a patriotic gesture that also covered a Reebok logo on his warm-ups.

It works the other way too. “I’ve experienced situations where we’ve terminated a contract because an athlete we were paying to endorse a product showed up in a public forum wearing a competitor’s product,” Burch said. “You pay enormous attention to something like that.”

After mounting pressure, the IOC loosened its rules last year to let companies that do not sponsor the games, like Under Armour, feature Olympians in their advertising. Those campaigns must be preapproved and cannot utilise Olympic trademarks such as the rings, or words like “Rio,” “summer” and “gold.” Under Armour has used Phelps in one such campaign since May.

The star swimmer has been at the center of an Olympic marketing snafu before. In 2012, an Annie Leibovitz photo taken of Phelps for a Louis Vuitton ad campaign was leaked while the London Games were still underway, a violation of IOC rules. Both the swimmer and the company denied releasing the photo.

“Phelps isn’t the first to do this, and he won’t be the last,” said Garry Cook, the chief global brand officer for the Ultimate Fighting Championship and a former Nike executive. “Every now and again, your personal life slips into your endorsement life. It does happen.”