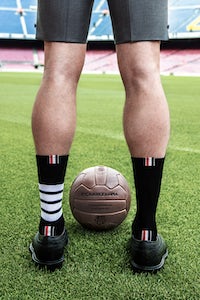 On Tuesday, just days after the 2018 World Cup's emotional finale, the New York-based fashion house announced that it would partner with Spanish football club FC Barcelona, known by locals as “Barça,” to be the official provider of the team’s “off-field tailored and formalwear uniforms” starting with the 2018-2019 season, which begins in mid-August.

The financial terms of the deal were not disclosed. However, the three-year partnership is adjacent in concept to the one Browne had with the NBA’s Cleveland Cavaliers, whom he dressed off-court for away games during the 2018 playoff season. (Whether or not that partnership will continue — either with the Cavaliers or with James, who is headed to the Los Angeles Lakers next season — remains to be seen. Thom Browne declined to comment.)

While the sartorial details of the Barça uniforms will not be revealed until game day, it’s safe to infer that “formalwear” will include some version of suiting tagged with Browne's signature red-white-and blue grosgrain ribbon. (Right now, the promotional imagery features a classic Thom Browne suit.) “I didn’t want it to be perceived as fashion,” Browne told BoF. “I wanted it to be a very classic, hand-made, well-made piece of clothing.”

But even though these players may be wearing a uniform of perfectly tailored garments — reflecting a certain level of decorum still underpinning organised sports across the globe — Browne wants to use this moment to communicate more broadly that that the brand is not simply the maker of high-water trousers and runway showpieces.

There’s a lot more people that could wear Thom Browne than realise it.

He wants people to know Thom Browne also offers the kind of sportswear, from tennis whites to polo shirts, that serves as the foundation of a more casual wardrobe. And that his prices vary, from $190 for a tie to $390 for a checked shirt, scaling up to $3,500 for a cashmere wool quilted Chesterfield coat. Browne also incorporates ultra-casual, yet still stylised, pieces — from sweatpants to quilted jackets — into his commercial collections. In a follow-up email, Bazan said that the brand will "continue to expand the product pricing architecture to touch more consumers, while continuing to prioritise quality." In laymen's terms: there will be more things for more people.

“There are lot of people who see the shows, or they see me wearing the clothing, and they think it’s very narrow,” Browne said. “There’s a lot more to what I do than what I think people have in their head. There’s a lot more people that could wear Thom Browne than realise it.”

Since ending his nearly decade-long contract with Moncler at the end of last year, Browne has been focused solely on further developing his namesake brand collection which, according to a report in the New York Times, generated $100 million in sales in 2016 and was on track to reach $120 million-to-$125 million in 2017.

“If anything, we’re containing the growth,” Bazan said. About 45 percent of sales are from direct channels, with 55 percent coming from more than 300 wholesale partners. The women’s business, which was introduced in 2011, now makes up 35 percent of sales, and the made-to-measure tailoring business on both the men’s and women’s sides is accelerating.

But there is more to be done. Sport is a natural focus for the designer, an avid runner who swam at university and played tennis in high school. He often tinkers with different athlete archetypes (the wrestler, the ice skater, the American footballer) in his fantastical runway shows. 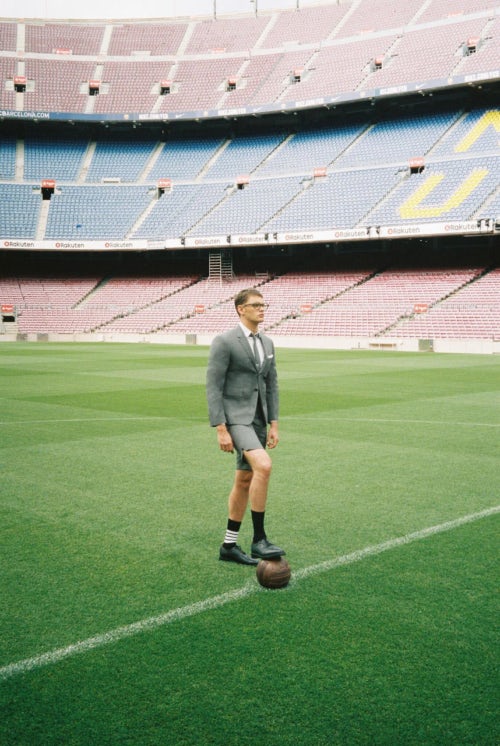 Given the global footprint of the Thom Browne brand, which is sold in 40 countries, partnering with different teams in different regions makes sense. About 30 percent of the company’s revenue comes from the US, 30 percent from Asia and 40 percent from Europe, where football is the dominant sport. (Over 22 million people in France alone watched the 2018 World Cup final. While global viewership numbers have yet to be released, they may top 2014’s final, which brought in more than a billion viewers worldwide.)

“This is a much larger platform than our fashion shows, a much wider audience,” Bazan said. “There are 315 million fans of this club globally, so we have an opportunity to touch many more people.”

For Browne, the partnership is not simply about exposure. “It’s not a marketing or promotional thing,” he said. “It’s something that is very true to me and how I like to counterbalance the conceptual sides of what I do with my collection.”

Originally, the football club reached out in 2016 regarding a potential sponsorship. Of course, that avenue is cost-prohibitive for most fashion firms. (Emirates, for instance, pays Arsenal around £30 million a year to sponsor its shirt and training-ground kit, according to the Telegraph.) “We said that we don’t do sport sponsorship; we’re not in that field,” Bazan recalled telling FC Barcelona. “But we said we’d be happy to dress the team.”

After all, football players have shown an affinity for fashion nearly as fervent as that of the top players in the NBA, who regularly sit front row at fashion week and often collaborate with luxury brands and retailers, using the association to help build their personal brands off the field/court.

“It puts Thom Browne into the pulse of cultural relevance,” said Marc Beckman, chief executive of DMA United, a talent and marketing agency that has represented NBA players Russell Westbrook and Anthony Davis, among other athletes, in their fashion deals. (For the 2017-2018 season, the NBA generated $1.1 billion in team sponsorships alone, according to IEG.)

“Kids are looking at what athletes are wearing,” he added. “It gets Thom Browne into their vocabulary and dialogue. When you saw [former Cleveland Cavaliers player] LeBron James wearing that suit, it resonated.”

Don’t be surprised, then, if Thom Browne introduces more sports-related partnerships, or sports-related products, down the line. “As I grow the collections, the idea of more performance is something interesting to me as I wear performance myself,” he said. Surprisingly or not, he doesn’t run in wool flannel.