Nike pulling controversial sneakers sends a signal to young customers that the brand shares their values.

Nike pulling controversial sneakers sends a signal to young customers that the brand shares their values.

NEW YORK, United States —  It’s typically a bad sign when a brand removes a product from stores. For Nike, pulling the latest iteration of its hit Air Max 1 sneakers may prove to be a masterstroke.

Earlier this week, the footwear giant said it wouldn’t be selling a new edition of its Air Max 1 USA sneakers that were supposed to go on sale this week to coincide with the USA's Independence Day holiday. The sneaker’s design included an American flag from the 1770s attributed to Betsy Ross — a symbol associated with the country’s founding but that in recent years has also been co-opted by extremist groups.

Nike has asked for the footwear to be shipped back by retailers, though a few pairs have popped up in the secondhand market. On Tuesday, StockX pulled the sneaker from its site, where pairs were listed for $2,500. CEO Scott Cutler told BoF that “the sale of this product on our platform does not align with our value system.”

Nike’s move touched off a firestorm of criticism, with conservative politicians, including Sen. Ted Cruz (R, Texas) calling for a nationwide boycott, and Arizona Gov. Doug Ducey ordering a state agency to pull subsidies for a planned Nike factory. 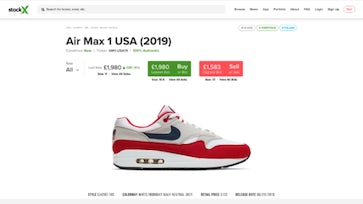 But for Nike, pulling the shoes was meant to send a powerful signal to its young customers that the brand shares their values, and is willing to weather criticism in order to prove it. According to The Wall Street Journal, Nike’s decision was informed by brand ambassador and former NFL star Colin Kaepernick, who complained that the Betsy Ross flag is offensive because it’s a symbol that’s recently been associated with slavery. The flag is being used by hate groups like the Ku Klux Klan and Identity Evropa, a white nationalist group, according to CNN; the flag represents an aspirational callback to a time when slavery was legal.

In a statement emailed to BoF, Nike said that the company regularly has to “make business decisions to withdraw initiatives, products and services” and that it pulled the sneakers “based on concerns that it could unintentionally offend and detract from the nation’s patriotic holiday.”

The Nike controversy speaks to how America’s culture wars are invading the retail sector with increasing regularity. Brands are now facing pressure to choose a side on controversial issues that at first glance have little to do with sneakers or fashion, from LGBT rights to abortion and gun control.

On Twitter, Cruz slammed Nike, tweeting “I respect Free Speech & I’m exerting mine: until @Nike ends its contempt for those values, I WILL NO LONGER PURCHASE NIKE PRODUCTS.”

I love America. I stand for the anthem, respect the flag & honor the men & women who fought to defend our Nation. I respect Free Speech & I’m exerting mine: until @Nike ends its contempt for those values, I WILL NO LONGER PURCHASE NIKE PRODUCTS. #WalkAwayFromNike RT if you agree. https://t.co/IvXNTgvlHq

Ducey, who had ordered the Arizona Commerce Authority to yank financial incentives it had offered Nike to build a plant in the state, tweeted that “Arizona’s economy is doing just fine without Nike. We don’t need to suck up to companies that consciously denigrate our nation’s history.” (In a statement to BoF, Nike referenced this manufacturing plan, noting that it already is an employer of "35,000 people in the US and remain committed to creating jobs in the US, including a significant investment in an additional manufacturing centre which will create 500 new jobs.”)

Arizona’s economy is doing just fine without Nike. We don’t need to suck up to companies that consciously denigrate our nation’s history. 8/

Nike has been at the forefront of brand activism since the footwear giant announced Kaepernick would be starring in its “Just Do It” ads in 2018. The hiring of the former football player, who in 2016 began to kneel during the American National Anthem at football games to protest police brutality against Black Americans, sparked a conservative backlash on social media and calls for a boycott. But joining forces with Kaepernick proved to be a smart move, endearing Nike to its young fans, who overwhelmingly supported the athlete. And while social media is once again currently brimming with hundreds of thousands of angry responses to Nike, analysts expect a similar outcome.

“This is a move that’s going to speak to its customers,” said Matt Powell, vice president and senior industry advisor for The NPD Group. “Nike’s core demographic is with teens, and the teen consumer aligns with this position that the symbol is offensive to some.”

While some conservative shoppers might say they are swearing off Nike, Powell believes it was important for Nike to show where it stands.

“The young consumer in the United States is demanding that brands take visible positions on social issues, and they are likely progressive in their political leanings,” he said.

Powell believes Nike pulling the sneakers was a good branding move, and he points to the success of Nike’s Kaepernick ad. Days after Nike debuted the ad, digital commerce research company Edison Trends reported that Nike sales were surging over 30 percent. Nike stock soared in the months that followed to an all-time high, with its market value rising to $6 billion.

More and more brands are moving into “commodity activism,” as some scholars have coined it, and it’s something shoppers expect too. According to Sprout Social, 65 percent of consumers feel it’s important for brands to act on political issues. Liberal shoppers, according to Sprout Social, also have stronger spending habits when it comes to supporting brands they feel have aligning values. Patagonia, for example, pledged the $10 million it had saved from tax cuts implemented by the Trump administration to environmental causes last year, and Gucci donated $500,000 to the gun control rally organised by the survivors of the Marjory Stoneman Douglas High School shooting.

Nike is sure to face more backlash in the coming days, but its decision proves that it's still committed to the values that came with its partnership with Kaepernick. Powell believes Nike will weather the latest storm, and likely come out ahead.

“The Nike shopper wants to know where brands stand, and if they don’t see companies acting, they will take their business elsewhere,” he said.