The Year Ahead: Self-Disrupt or Die

Technology and social media are enabling a new breed of ‘challenger’ brands, leaving incumbents with a stark choice.

LONDON, United Kingdom — Fashion brands, and luxury houses in particular, are often successful because of their heritage. While this continues to be a key advantage, it is no longer enough. In this year’s BoF-McKinsey State of Fashion Survey, self-disruption is top of mind for 2019, with 79 percent of executives placing it in the top five trends impacting the industry.

There are two key forces driving self-disruption: younger consumers’ preference for novelty and advancements in both digital technology and social media.

According to the McKinsey Millennial Survey, younger generations are more willing to set themselves apart through brands and they are also more likely to follow up-and-coming brands. The latter will typically challenge fashion conventions through either branding, communication or distribution. At the same time, social media has dramatically levelled the playing field, allowing these “challenger brands” to disrupt the marketplace. Their emergence partly explains the 50 percent annual growth of Instagram advertising spend. 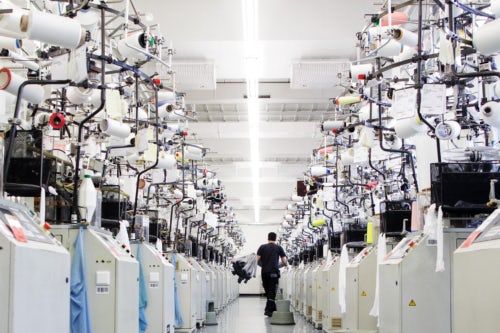 Challenger brands disrupting a sector are characterised by rapid growth, social media fluency and e-commerce focused distribution. Clothing brand Reformation, for example, has 1.1 million Instagram followers, as of printing this report, and makes 80 percent of sales online. It pushes its green credentials and has a roster of celebrity endorsers, including Emily Ratajkowski, Selena Gomez and Rihanna. Another disruptor brand I.AM.GIA (which has created an Instagram It-girl persona called Gia) has a similar profile, with over six hundred thousand Instagram followers and a strong celebrity following. Both companies are growing sales at high double-digit rates.

If performance were measured by social media growth alone, the big incumbent fashion players would already be in trouble. Brands such as H&M, Dior and Zara grew their Instagram fan base by less than 30 percent in the year to September. Many disruptors saw their Instagram following expand by more than 130 percent over the same period, and some by more than 300 percent. Earned Media Value (EMV) levels are much higher among the challenger group. Challenger brands also boast more impressive engagement; the like/follower ratio for Supreme and Everlane is 1.9 and 1.4 respectively, versus 0.3 for Dior and 0.5 for Louis Vuitton.

Established brands recognise that challenger brands are often more nimble and effective at reaching young audiences. In response, the former are now turning to a series of levers to “self-disrupt.”

The primary lever is to conduct brand makeovers, overhauling their approach to create the impressions of having their finger on the pulse by refreshing their image. Burberry, for example, developed a new logo and monogram under Riccardo Tisci. After appointing Hedi Slimane as creative director, Celine debuted a new logo on Instagram and took a notable pivot away from the signature aesthetic to which consumers had grown accustomed and loyal.

In an increasingly fickle fashion environment, market leaders will also need to take more risks to stay ahead.

More heritage brands are turning to streetwear brands to create a cooler image and have reflected that ethos in their talent strategies. Louis Vuitton in 2018 appointed Virgil Abloh, known for his disruptive streetwear brand Off-White, as its creative director. The origin of this type of self-disruption can be traced back to the flurry of collaborations between high fashion and streetwear players in 2017, through which a new kind of experimentation became the norm. This tendency to collaborate and flex a brand’s identity has now reached critical mass, and we expect it to persist in the future.

Other forms of disruption we see in fashion include exclusivity, faster fashion and new channels. Numerous established brands are rethinking their business models to reflect these evolutions. For instance, some are moving away from the traditional fashion calendar and imitating the “drop” approach commonly used by streetwear labels to release smaller and more frequent collections that create rarity value and elevate anticipation. Moncler’s launch of its “Genius Project” is an example, with Hiroshi Fujiwara’s first drop driving a 43 percent month-on-month increase in earned media value (EMV) in June 2018 according to Tribe Dynamics. More recently, Burberry announced its launch of “B Series,” a new series of monthly product releases on the 17th of each month. 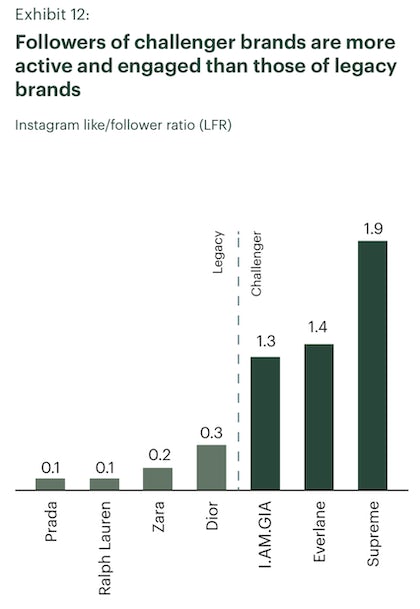 Established luxury brands are also increasingly embracing digital channels as a primary, at times exclusive, route to market. Following the early disruptors Warby Parker and Everlane, Comme des Garçons will launch its first direct-to-consumer (D2C) only brand later in 2018 to expand its customer base. We expect more established brands to follow suit.

Some established brands are embracing disruption by launching accelerators and incubators to test new approaches in a more controlled environment. These are more flexible and less risky than mergers and acquisitions, enabling experimentation and offering the opportunity to accelerate business model innovation where necessary.

Kering’s second wave of Plug and Play, an accelerator focused on sustainability, is one example. Another is LVMH, which in 2018 launched its La Maison des Start-Ups accelerator programme at its Station F campus in Paris, promising to offer work stations and support for 50 start-ups each year. These initiatives help major players support innovators and absorb or adapt some of their most pioneering practices and ideas. Others are creating dedicated internal units to streamline the innovation process. Gucci Artlab, also launched this year, is an innovation hub focused on leather goods and footwear.

Looking forward, we see three key disruptive developments. To compete with challengers, established brands will continue to innovate, leveraging their scale to fast-track capability building through M&A, accelerators and innovation labs. The latter will help companies remain at the forefront of business model innovation and respond to new fashion trends more quickly. It will be increasingly important to adopt agile ways of working and depart from the traditional operating model. Players will also work to streamline supply chains, enabling faster time to market. In an increasingly fickle fashion environment, market leaders will also need to take more risks to stay ahead. Sub-labels will continue to proliferate, enabling brands to experiment while maintaining the authenticity of the parent brand.

Fashion brands must learn to be more willing to adapt themselves, embracing a more flexible approach to doing business in areas from commercial models to the supply chain and distribution.

Tiffany chief executive Alessandro Bogliolo summarised the mood perfectly: “We all share the same challenge — a continuous demand for change — of newness, of communication, product, everything. And this is a huge challenge because we must do it right, but we have to do it in a way that is not going to erase your personality. Constant change, but you still have to be yourself.”