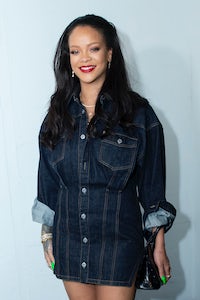 Rihanna surprises her fans at the opening of the Fenty pop-up store on May 24 in Paris | Source: Getty Images
Luxury
Share
5 Comments
By Liroy Choufan May 30, 2019 05:20

The gaggle of designers, from Maria Grazia Chiuri to Simon Porte Jacquemus, who flocked to greet Rihanna last Thursday as she debuted her new LVMH-backed luxury fashion line, were guests at their own funeral. Not literally, of course. But the arrival of Fenty is a harbinger signalling the coming death of their profession.

It’s not just that Rihanna isn’t a designer. The logic goes far deeper.

Remember, the very role of the fashion designer is a relatively recent invention that dates back a mere 150 years. Starting in the 1800s, designers began collecting together the various stages of the creative process — from fabric research to cutting and sewing, once fragmented and handled by various craftsmen — under their own brands names. Once their label was sewn into a garment, the details of the supply chain disappeared, with the entire work credited to the designer.

The designer has become a metaphor. If before the 19th century, one had to know a tailor, an embroiderer and a button-maker, now one needed to know only the name of a single person — the one associated with the idea of the design, rather than those responsible for actually realising it.

To be sure, having one name on a garment label made for highly effective marketing. It created a strong and singular point of reference. And, as time went by and the fashion industry became global, fashion designers were increasingly encouraged to act, not only as creators of concepts, but as celebrities, visible in the public eye. Cue the designer, now reborn as a star designer, hopping from gala to interview.

Fenty... is born from one thing only: Rihanna's public image.

Consider the case of the late Yves Saint Laurent. In the 70s and 80s, every aspect of his personal life, from his own naked body in the famous Jean-Loup Sieff photograph to his alleged addictions (the hit perfume Opium being a bold reference to these rumours), was harnessed to attract attention and sell.

The international success of YSL, which made Saint Laurent himself a myth, along with the rise of Giorgio Armani and Valentino Garavani, led the way for the likes of John Galliano and Tom Ford. Even if their names were not always sewn into the labels of the brands for which they worked, they were marketing masters encouraged by their employers, LVMH or Gucci Group (now Kering), to always be in the forefront and to promote an artsy and eccentric persona. Because by taking centre stage, the entire creative process was credited to their genius, obscuring the thousands of others whose work contributed to their products, shows and advertising campaigns.

But the arrival of Rihanna’s Fenty has pushed the idea of the star designer to its logical conclusion — and breaking point. Fenty is not associated with a set of craftsmen, but nor is it associated with a designer. It is born from one thing only: Rihanna's public image. It’s a post-designer brand and an experiment that could well signal change for the way the luxury fashion game is played.

Of course, the popstar hasn’t ditched fashion designers altogether. They are still there to do the actual work of designing Fenty’s collections. But in the age of social media, as fashion becomes less about clothes and more about entertainment, designers may be no match for true celebrities like Rihanna in their ability to gather a community and drive sales, forcing designers, much like the craftsmen who preceded them, to take a backseat.

After all, who needs a star designer when you have a real star?

Liroy Choufan is a lecturer at Shenkar College of Engineering and Design and a fashion writer and researcher based in Tel Aviv.