ROME, Italy — I have admired Azzedine Alaïa and his unique approach to fashion design since the 1980s, but I had never met him until we had lunch a few days ago in Rome, just before a major exhibition of his work was due to open at the Galleria Borghese. When I arrived at Harry’s Bar on the Via Veneto, I was very pleased that Alaïa was there with his close friend Carla Sozzani, who was instrumental in arranging our meeting. Mark Wilson, a close friend and his co-curator for the exhibition, had also downed tools in order to be present.

Our lunch conversation was multi-national, but respected the fact that Alaïa is only really happy speaking French and, even then, prefers silence to talking. But even when silent, the designer is incredibly watchful, taking in everyone and everything around him. Sitting opposite Alaïa, dressed in his signature black, I felt, for a split second, that I could almost be in the presence of a holy man, surrounded by acolytes and tenders of the flame.

An interview in a restaurant is not conducive to delving deep into the soul, in less than five minutes however, I realised that I was with a man unlike any other in fashion, who has been summed up by Alber Elbaz — another very special person in the fashion world — as “the one and only!”

Alaïa’s birth into a North African farming family in Tunisia — I would guess at sometime in the late 1930s, as the designer did not disclose his birthdate — is perhaps why he rejects the fashion theory that there must always be something new. “All the fashion editors dress in the same way in one season and then completely differently the next," said the designer. His statement echoed comments he has made frequently in the past: "These are simply clothes. Something becomes important at a certain point in time and everyone wants it. But there is no fashion in the sense of endless change. An 18th century garment has its own life and can still fascinate us even though it is no longer fashion." Alaïa was so sure of his conviction that he could be a farmer referring to the land, his crops and the rhythm of the seasons.

Very early on in his life, Alaïa knew that his career would involve women and be something to do with dress. Aged 15, he left home to enrol at the Ecole des Beaux Arts in Tunis, having lied about his age in order to be accepted. He soon discovered a talent for sculpture, through which he realised that shape, volume and surface were vitally important to him. Sculpture was not to be Alaïa’s chosen path, however. He already read fashion magazines, loved the women they featured and found their dress fascinating. In order to get through his course, he learned how to sew, helped by his sister, and recalls receiving one franc in payment for sewing a garment for a local seamstress. But that was not the point for Alaïa — he had taken the first step in what was to become an amazing life in fashion.

Although he loved drawing, sewing soon became his passion and he found work with a copyist who "ripped off” dresses by Balmain and Dior, the two biggest fashion names in Paris in the late 1940s. By the time he was 18, he had moved to Paris and found a job with Dior. His role at the maison only lasted a week however. At the time relationships between France and Algeria were deteriorating rapidly (and would eventually become a full-scale war) meaning that work permits from North Africa were carefully scrutinised. Alaïa’s papers were found to be 'not in order' and he had to leave the company.

Through a female friend (his closest friends seem always to be women) he found work with Guy Laroche, a popular designer in Paris at the time in the late 1940s. He became a freelance designer and worked with people of the calibre of Yves Saint Laurent and Thierry Mugler. He also worked on the costumes for the girls at the Crazy Horse, a famous nude cabaret club. He loved the job because, as most of the clothes had to be removed during performance, they had to fit absolutely precisely, especially in the more sensitive parts of the anatomy.

By the 1970s, the name of Azzedine Alaïa was well known by fashion insiders like Grace Coddington and the New York Times photographer Bill Cunningham, but completely unknown to most fashion writers and stylists. He was perfectly happy with the situation, however, when models like Pat Cleveland and Naomi Campbell began to rave over him and Tina Turner wore his gold ‘waterfall’ mini dress, his name was on the lips of everyone who wanted to be an 'insider.’ It was the 1980s, ‘sexy’ was in and nobody did it better, as nobody does — even to this day. Those invited to his presentations in his kitchen, where you normally sat on the floor surrounded by his many cats and dogs, only thought was how lucky they were to be there, when so many were excluded.

Today, the designers still avoids many of the trappings of the commercial fashion system, including traditional fashion weeks. But following a deal with Swiss conglomerate Richemont, in 2007, the Azzedine Alaïa brand has opened a major flagship and launched its first fragrance in May 2015, seen by many as the first step in the label’s expansion plans.

However, Alaïa continues to do a remarkable job in focusing media attention on the clothes he creates, not the brand that has come into existence as a result of them. The designer once said that he saw himself as a builder – but in soft, malleable fabrics that stretch with the body to create fabric sculptures. He loves jersey knits, Lycra, soft leathers and suedes, but also works brilliantly with the softer silks which fold, drape and fall with the inevitability of Greek sculpture, which, as he points out, concerns the clothed body just as much as nudity.

So, it seems entirely appropriate that his latest exhibition, co-curated by his long term exhibition collaborator, Mark Wilson, is called 'Couture/Sculpture: Azzedine Alaïa in the History of Fashion.' And, even more appropriately, it is being staged at the Galleria Borghese in Rome (until October 25th), one of the world's great collections of Roman and Greek sculpture, which also houses works by Canova and Bernini, paintings by Caravaggio as well works by most of the great Renaissance artists, in oils or marble. It is one of the world's most important collections and makes the perfect venue for Alaïa's work. But the Galleria Borghese is not just a background for the 65 Alaïa pieces on show. The clothes have been carefully placed not only to complement and energise the individual works of art that surround them, but also to pay homage to the great artists in the permanent collection. The inspired result is that the garments add a subtle extra dimension to the permanent collection and receive a gravitas and tranquillity in return. 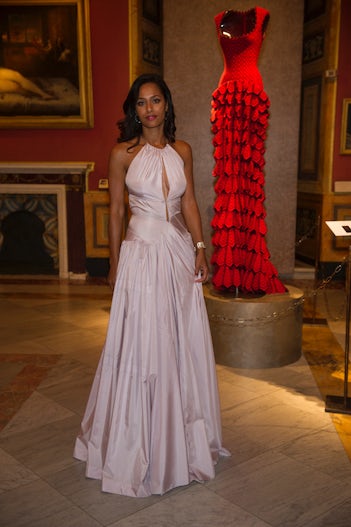 As Alaïa explained, his work had to fit into the existing layout of the galleries. Nothing in the permanent collection has been moved. In fact, it is Alaïa who has had to adapt. Because of the scale of the full length, life-sized and larger sculptures, most of which are on plinths, he has remade some of the dresses. “The garments had to be on a scale with the sculptures," he points out as we walk around. “They have to be very discreet, not invasive. People come to Galleria Borghese to see great sculptures, not my clothes.” That being said, they will also see clothes that are, in many cases, uniquely re-proportioned. As Mark Wilson added, “there is no way the Berninis or Canovas will go on tour and this is what makes it such a uniquely special environment for us.” It is an elegant and totally convincing amalgamation of the ancient and modern and a powerfully satisfying success.

During my tour with Azzedine and Mark, each of the shrouded garments were revealed for me and, incidentally, the crowd of tourists already in the galleries. The effect on them was surprising. As each cover was removed and the garment beneath revealed everyone stood still, taking in the dress in silent admiration — even awe — before they started photographing it. The atmosphere became that of a holy place of pilgrimage. Standing next to Alaïa, the quietest and most controlled fashion designer with whom I have ever talked or spent time with, it was very apparent that he was quietly happy, and possibly even more moved than the tourists, by the instant rapport that his clothes had with their audience.

There is no doubt that to put clothes alongside great works of art is a gamble. It has been tried several times with varying degrees of success. But I am sure that this exhibition will very quickly come to be seen as the benchmark for mixing fine art and fashion to the advantage of both sides, in both art and fashion circles. There is nobody working today who could pull this off with the aplomb of Azzedine Alaïa. As many designers, stylists, photographers and students should make the trip to the Galleria Borghese as possible.