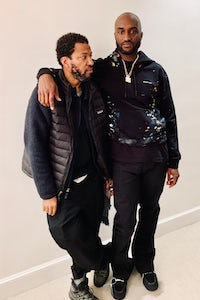 Today more Black fashion creatives are teaming up with their more seasoned or well-placed counterparts, forging new intergenerational links that have historically been weak but can significantly help to drive the advancement of Black talent.

Abloh hired Buchanan to design knitwear for Off-White in June 2019 and launched Off-White ℅ Andre Walker, a capsule collection with Walker, this February. Plans to sell Buchanan’s own Sansovino 6 knitwear label in Off-White stores are also in the works.

“[Designer] Willi Smith is not alive to see his influence. I want to present our icons while they’re living. And Andre and Edward should be heads of houses in my book,” said Abloh. “When I think of Andre and Edward, who have different aesthetics, I see an intangible quality in their work. I don’t just see the literal garments. I see emotion, and I see drama, glamour. I see the energy of Essence and Jet magazine.” 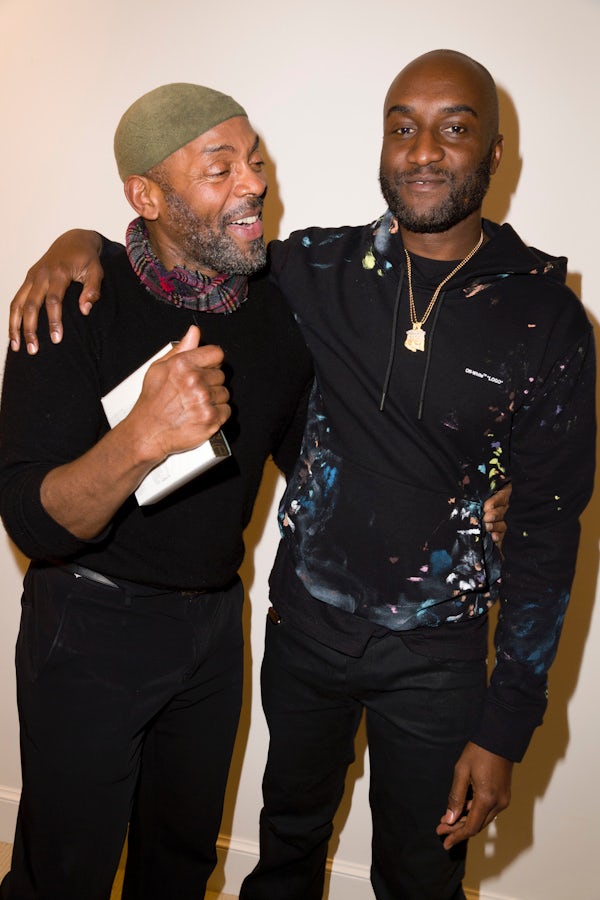 “I’ve collaborated with Black Creatives from A to Z,” continued Abloh, who has also forged alliances with a younger generation of Black designers. “If you have a look at each phase, whether it’s me and Shane Olivier at Hood by Air, back when I was doing his graphics, or Ev Bravado, a young designer who’s now coming of age, or Samuel Ross of A-Cold-Wall who was my first assistant. From Kanye West to Jerry Lorenzo, if someone drew my career, it’s a lexicon of Black creatives.”

For Abloh, it’s critical that Black fashion designers help to provide each other with a platform but also the space and autonomy to create. Walker says Abloh’s sole stipulation in their collaboration was that he design two hoodies. (The resulting capsule features two t-shirts, two sweatshirts, a suspender bag and a pair of track pants).

“It’s a new way of thinking and creating,” said Abloh. “I’ve always looked at my career as a vessel, as an ecosystem to hyper-realise a utopia where Black creatives can be creative. There is a huge conversation right now that Black culture is at the epicentre of this big cultural movement in music, fashion, art, etcetera, but is often not credited. It’s like how does this culture get out to the finish line without being edited, compromised or watered down?”

A shared connection to Black culture, Black inspiration and to the preservation of our history is often key to these intergenerational collaborations. And Saunders said she found a match in Binns, who has lived in London for 30 years but got her start working New York club doors in the 70s and 80s.

“I think of so many different things at the same time when I work. I think about the artistic take on design, references to my own [British-Jamaican] culture, things I see in London — Karen understands all of it,” said Saunders. “We always speak about Black men, Jamaican men in particular. Many of my conversations are about their masculinity. There’s a lot more feminine energy injected in Jamaican masculinity in terms of style and we often discuss this.”

Binns, who has worked with Tori Amos for 25 years, has also forged a creative alliance with 30-year-old Nigerian musician Wizkid. “Wiz has excellent taste, knows who he is and is extremely successful. But he wants to do more. And because I’m older, I know how to back him up and bring even more to the table. So, he is a creative medium that has someone who can support his creativity, add to it and push him.”

Then there’s Oscar-winning costume designer Ruth Carter who collaborated with over three dozen mostly Black creatives on “Coming to America 2,” populating the movie with designs from young Afrofuturist jeweller Khiry, metalwork dresses by Laurel DeWitt and the tailored prints of Ikire Jones, among others.

These kinds of collaborations are critical to the advancement of Black creatives. A Black peer or mentor with experience, access and a platform can be critical to helping Black talent enter and succeed in dominated spaces. Indeed, it’s no accident that every Black person surveyed for this column was helped by another Black person to secure employment at the beginning of their careers.

Many are looking to Abloh to lead the charge. “I feel that the real work for my community is to give us a free platform to express ourselves without having to compromise our integrity and vision,” he said.

The Truth About Black Buying Power