Courtesy of our friends at Bon magazine, Katharine Zarrella speaks with Andre Walker, Brooklyn-based designer turned fashion artist, about his message for the luxury world.
By
12 September 2013

NEW YORK, United States — "Most people don't understand what the word 'decadent' means," offers Andre Walker, sitting in the garden at Manhattan's Museum of Modern Art. "They think it means 'fancy' and 'luxury' but actually, it's something in a state of decay."

Mahatma Gandhi said, There is no beauty in the finest cloth if it makes hunger and unhappiness.

Walker — a 45-year-old Brooklyn-based designer turned self-proclaimed fashion artist, whose claims to fame include an outré clothing line he launched in New York's downtown clubs when he was a teenager, consulting for the likes of Marc Jacobs and Kim Jones, and publishing a tactile fashion and arts zine called TIWIMUTA — has a pretty firm grasp on the definition. And he is concerned that contemporary culture's 'Give me more now' mentality, as well as its lust for synthetic materials and overproduction, has thrust the fashion industry into an ethically questionable downward spiral.

“I’m obsessed with getting things made properly,” he says. “Luxury can be reimagined. I just feel like we need to start looking a little closer."

Walker sits down with Katharine Zarrella to voice his views on the state of the industry and why, in spite of it all, fashion is still "gorge."

KZ: You once said that, at age nine, reading W magazine was a magical experience for you. Does fashion mean the same thing to you now as it did then?

AW: No, not at all. I believe that the infrastructures of fashion have eroded over the years, and I think the systems need to change. We need to revisit how clothing is manufactured, how fabrics are made and what kinds of materials are used. In my opinion, a lot of the top luxury brands are not really making luxury goods. I can’t look at plastic shoes that cost $3,000 and call that luxury.

KZ: Is manufacturing, in your opinion, the biggest problem?

AW: No, it’s consumption. Consumption is the new servitude. It affects every demographic, from the rich to the poor. Everyone is forced or obliged to purchase something. The extremely wealthy don’t have to think as much about what they buy as the poor or the middle class, so it’s up to the extremely wealthy to lead by example. They need to become more conservative in their behaviour.

AW: It would be really interesting to see how top-tier fashion companies would react to all of their consumers wanting something biodegradable, for example. I don’t see the future in clothes made from plastic and latex and nylon and acetate — not with everything that we know about the world. We need to go beyond this surface that everyone is so quick to call luxury. These fabrics are outdated. We need to challenge what we’re actually bringing forth into the world, rather than just paying homage to these dumb Hello Kitty dolls and having shrines of junk that are supposedly so cool.

KZ: How did you transform from the little boy reading W magazine to Andre Walker, fashion artist?

AW: I was born in London, and by the time I was four, I was obsessing over the crazy shoes and clothes that my mom was bringing back from her trips to Italy, where she'd dance as part of a cabaret. I was so fascinated, and I'd draw them with crayons. When we moved back to New York in the early Seventies, my mom got a subscription to W magazine, and that just started it off for me. The first issue we ever got was called "Paris is a Balloon." It had three tweed dresses from Kenzo's Jungle Jap on the cover — sick. By the time I was 13, I was going to 42nd Street and buying Italian Vogue, Vogue Paris, L'Officiel, all of 'em. My mom was super chic and we used to do a whole uptown gig and go to Saks Fifth Avenue and Henri Bendel. I was obsessed with store windows, drama, glamour, red lipstick, white powder, all of that stuff.

KZ: Is there a place for that today?

AW: Absolutely. Aesthetics are one of the only things left. It's all about the visual, but that has nothing to do with how things are made. Anyone that has the ability to keep renewing the visual and aesthetic cycle will be a winner. Look at all the new designers that we love: Mary Katrantzou, JW Anderson. There's always room for growth.

KZ: Do you feel that any luxury labels are getting it right?

AW: I don't have many heroes at the moment. If I see some plastic coming out from Prada, or Marc Jacobs or Lanvin, I just think, "Gosh, you guys can do one thousand times better than this." A lot of people have this passive mentality when it comes to evolving ethically within fashion, or within society, and I think a lot of corporate society just feels cooler waiting and pulling in the coins until it's necessary to do otherwise. You know, I thought Suzy Menkes was gorgeous when, in her review of Raf Simons' [S/S 2014] menswear show, she talked about artificiality versus organic, and said that nylon is now considered an "enemy."

KZ: What do you feel makes a luxury brand worthwhile these days?

AW: I love quality. Quality is so much cooler than luxury. Luxury is becoming enormously questionable. People can’t see past what’s in front of them. They want to be seen carrying their shopping bags and flying first class. And, you know, I love being wealthy. I do. I can buy things for my parents, I can give to homeless people in the street. I can take a cab. I can have a bike in Paris, London and New York. Yet, I don’t want to start endangering the people around me because of my lifestyle. If we have five billion self-indulgent people, we’re going nowhere fast.

KZ: Why is there so much fashion out there today?

AW: I feel like fashion has started to mimic the finance world, it's starting to mimic the grandeur of that bubble. But all you have to do is go to a department store to see there aren't that many people buying these clothes. If you have a bigger population, it's understandable that you're going to have more designers, but the more designers there are, the less each designer has to make. If you're [online], and windows are coming up every five seconds, does that mean a different garment has to pop up every five seconds to go with it? Does fashion really need to correlate with the speed with which we access information?

KZ: I’m sensing that you’re a bit frustrated with the state of the industry at the moment.

AW: I just think the top 20 brands — granted these are people that I will work with and I want to work with — really need to start shaping up. When Prada or Marc [Jacobs] or Lanvin began to experiment with aesthetics and freedom of the body and freedom of expression, the public ate it up. Imagine what would happen if they started experimenting with the foundation of fashion [production]? When people were doing handcrafted lace and beading from the 1890s into the late 1930s, it was luxury and it was extremely time-consuming, yet somewhat sustainable. But trying to give that to every single man is not sustainable. You'll need to find cheaper alternatives. And if you need to find a cheaper alternative just for an aesthetic, you have to really think about if it needs to exist.

KZ: Are you saying that decadence — or opulence — doesn’t have a place in fashion?

AW: It’s not that it does not have a place in fashion — I think decadence needs to be reviewed. Couture is like, whatever. It’s cool. It’s a nice video. But aspiration has nothing to do with integrity. I think if self-indulgence wasn’t so magnified internationally, we’d see people with much clearer heads. Mahatma Gandhi said, “There is no beauty in the finest cloth if it makes hunger and unhappiness.” I don’t believe in luxury for luxury’s sake. I think it’s a farce and a lie and a joke and boring.

KZ: Are you still excited about fashion?

AW: Oh my god, I love it, because I love aesthetics. It's not that I'm against fashion. I think fashion is against itself. The industrial revolution just didn't realise that it wasn't sustainable. We all need clothes. That's the beautiful thing about fashion — it's an absolute utility. And there are so many good designers out there: Alber Elbaz, Ryan Lo, Mary Katrantzou, Tomas Maier at Bottega Veneta, Hermès, Haider [Ackermann], Kim Jones, Marc… I think fashion is gorge. 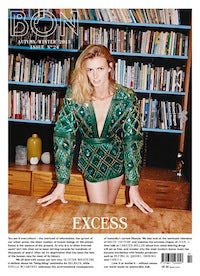 This article first appeared in the current issue of Bon magazine.
In This Article
Topics
People
Organisations
Location
Tags