A Futurist Game Plan at Balmain

The collection's passages read like capsules rather than a singular message, and a tighter edit could help clarify that. 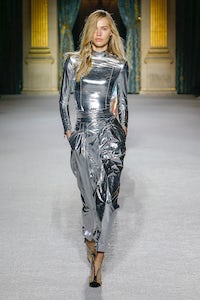 A Futurist Game Plan at Balmain

The collection's passages read like capsules rather than a singular message, and a tighter edit could help clarify that.

PARIS, France — Balmain goes Barbarella? Though nearly one hundred outfits stomped past on the carpeted floors of the Hotel de Ville for Olivier Rousteing’s latest assault, it was the chapter of iridescent, silvered, and day-glo looks that remained burned into one’s retinas. Of late, the brand’s modus operandi has been to transpose pop themes onto a now well-established set of house codes: the micro-mini evening dress and the power suit being the two pillars that Rousteing transforms each season.

To fulfil Autumn’s optimistic, Futurist game plan, they came in holographic paillettes and quilted leather, encrusted with sequins (a trench coat, nonetheless), and plissé-d with plenty of wipe-clean fabrics that continued the graphic move away from primal, craftier embellishments that began in Spring. There was a classicism at play too, with engineered tulle and Breton stripes galore. Though anchored by the tropes of body-con, frills and flounces, Rousteing’s upbeat wares cast a wide net here – his passages reading like capsules rather than nuancing a singular message. A tighter edit could help clarify that, without losing an ounce of Rousteing’s joie de vivre.