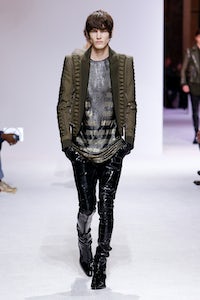 PARIS, France — You cannot fault Balmain's creative director Olivier Rousteing for not being consistent. He inhabits his own bubble — a flashy, catchy, unabashedly glamorous one — and creates Balmain’s collections accordingly. The ingredients are well known and well established at this point, and for menswear are rather autobiographic. Rousteing is the Balmain man. They feature strong-shouldered jackets, dramatic outerwear, long t-shirts and skinny trousers. A high-voltage mix of sparkle and military is another recurring theme. Season in, season out, Rousteing keeps exploring the same shapes and the same details, with little or no progress. Still, he regularly delivers a joyous, energetic punch.

This time around the very same elements coalesced — at least according to the press notes — around the idea of revolution, not evolution. This meant the addition of patent leather and some rather futuristic clear plastic used for outerwear. Was it revolutionary? Hardly. It was business as usual, which the Balmain posse of fans will appreciate.