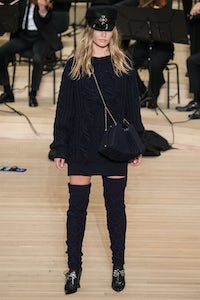 HAMBURG, Germany — The Shakespearean inference was irresistible. In the twilight of his years, Karl Lagerfeld, fashion’s éminence grise was coming home to show in his birthplace Hamburg. A final spectacle, an imperial peace made with his past.

OK, I got that one wrong. The truth? Starchitect superstars Herzog De Meuron designed a new concert hall for Hamburg that ran untold millions of euros over-budget and flipped the burgermeisters’ wigs. But the building has since become a cultural fulcrum so potent that it garnered Hamburg a cover of national newsmag Der Spiegel which labelled the city the new capital of Germany. Lagerfeld saw that cover, sat up and thought, "Let’s go back."

So here we are, in the Great Concert Hall of the Elbphilharmonie for the annual presentation of Chanel’s Metiers d’Art. An orchestra led by British wunderkind Oliver Coates (Radiohead’s favourite stringmeister) is tuning up. An audience of some 1400 people arranges itself across a configuration of seating so precipitous that the genes of a mountain goat could prove useful in negotiating one’s way ever upwards. Silence falls. The strains of La Paloma, the Marseillaise of a city which has, unlike any other German metropolis, never kneeled to a king, fill the auditorium. The models walk. Chanel breaks free.

Hamburg is a port, matching Rotterdam as the biggest in Europe, “but more fun”, Lagerfeld claimed after his show. He opened with a whole lot of sailor stuff: chunky roll-necked cable-knits, pea coats, drop-front pants, duffel bags. His male models sucked on long-stemmed pipes. And everyone was wearing the same sailor caps that would be familiar to Beatles’ fans, well-versed in the folklore of four lads whose three years of fierce, character-forming gigging in Germany turned them into a hit machine for the ages. Remember, John Lennon said, “I didn’t grow up in Liverpool, I grew up in Hamburg.”

There was a refreshing strictness to the effect: minimal but powerful. It reflected Lagerfeld’s sense of his hometown. “Hamburg was always kind of discreet,” he observed, “never a red carpet city. They’re humble people who never showed how rich they were.” True, in that respect, Hamburg has more in common with its Scandinavian neighbours than the rest of Germany to the south, and all the better for it.

That restraint helped Lagerfeld to one of his best collections in recent memory. He insisted it was much too sentimental to claim the show as some kind of homecoming, telling the story of a distinctly unsentimental mother who, intuiting her son’s inclinations, told him, “You’re not born for the business world so you’d better go somewhere else.” The only real option was Paris.

Still, Lagerfeld told a small huddle of journalists, “If you were not from Hamburg, it would be difficult to make this collection.” Perhaps by that he meant the sober luxury of the clothes: the pinstriped suits with their sailor collars, the Stygian eveningwear discreetly shot through with silver beading, the muted colour palette of navy, grey and brick red, a melancholic reflecting of sea and sky and the city’s solid architecture, incorporated by Herzog De Meuron into the Elbphilharmonie’s interior. (There was also a colour-blocked pattern which apparently reflected the dockside stacks of containers which testify to Hamburg’s importance as a port. The designer seemed very taken with them).

But there was something else in this collection that distinguished it from its predecessors. It was sexy. Those cashmere cable-knits were shown as abbreviated sweater dresses, with matching thigh-highs. There were sheer blouses and black leather, little strapless dresses with ruffles of jet coq feathers and a literal raciness in the stripes down the side of black crepe tuxedo pants. And that was Hamburg too, the port city whose Reeperbahn district became a global byword for bad behaviour. Sobriety sparked with sin, always a potent combination.

At the after-show party, in the Fischauktionshalle, a massive barn of a place that felt like a Viking hall, singing “sailors” serenaded the heaving crowd with sea shanties. Sanitised though it was for the here and now, it wasn’t hard to imagine the building’s past, where the city’s brawlers and nightcrawlers would famously show up for a fish breakfast after a night on the tiles. You might even have seen a Beatle.