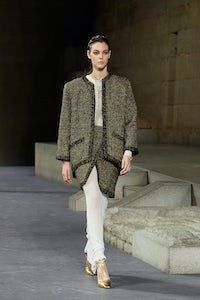 NEW YORK, United States — The ancient Temple of Dendur was a gift from Egypt to the United States. In 1967, President Lyndon B. Johnson awarded it to New York’s Metropolitan Museum of Art. On Tuesday, underneath the structure, Chanel debuted its latest Métiers d'Arts collection, the first runway show to take place inside the museum in 36 years.

Much has changed in fashion since Valentino christened the main hall in 1982. Destination runway shows are now commonplace, at least for luxury megabrands like Chanel, which view these multi-million-dollar spectacles as marketing and PR goldmines. But Tuesday felt like a particular feat. Chanel not only had to pay the Met to use the space, it had to convince the museum that it was a good idea.

Perhaps this is why creative director Karl Lagerfeld, who uses this annual collection to show off the irreplaceable skills of the 26 traditional ateliers owned by Chanel subsidiary Paraffection, paid such careful, literal homage to ancient Egyptian culture, down to the graphic line on the eyes. The models, their legs spray-painted gold, heads topped with Nefertiti-crown-like hats — wore sparkling-tweed blazers with coat-hanger shoulders, mosaic-glass-encrusted collar necklaces and elongated silhouettes that often began with a base-layer dress made of a thin, muslin-like material akin to a mummy wrap. New York in the early 1980s washed over the collection, too, not only in the power dressing but also in the intarsia knits, autumnal florals and bomber jackets graffitied in gold lamé.

Lagerfeld friend and collaborator Pharrell Williams made an appearance on the catwalk as “Egypt, Egypt,” the clubby 1984 single by American musician Egyptian Lover throbbed in the background. The only thing missing was the Bangles’ 1986 hit “Walk Like an Egyptian.” Everyone has their limits.

The throng of clients, who the show was also targeting, did not seem to mind the lack of nuance. Instead, they snapped photos of themselves in front of the Temple, enjoying the free champagne. As Chanel president Bruno Pavlovsky said in an interview the morning of the show, this is just the first taste of the collection for them: over the next six months until the line hits stores in May, clients will be drip fed new information about the line, how it was made and who made it.

The afterparty, staged in a toasty makeshift structure plopped in the middle of chilly Central Park, was a sort of 1980s-diner-night club mash-up, with truffle-scented French fries and petite, but not mini, burgers served out of aluminium trailers. A client, her white poodle fit snugly under her arm, danced. Egypt was officially history. It was all about America now.