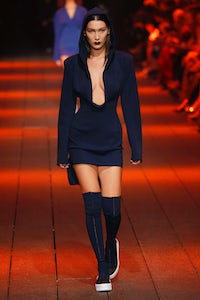 NEW YORK, United States — There were things to love about the DKNY show. Twin Shadow’s pulsating soundtrack may be the best of the week. And there’s no doubt at all that Pat McGrath’s makeup will be the cosmetic standout, glittering eyes and lips yielding precisely the kind of replicant glamour that Dao-Yi Chow and Maxwell Osborne were after in their clothes.

The first look staked their claim: Bella Hadid, features frozen into a perfect mask, imperiously shouldered and booted, and hooded like the high priestess of a manga cult, with “New York is the New New York” as its mantra. The designers reconfigured the urbanwear of their Public School persona for a new world. A mutant parka announced that: “Everything was Different in the Future.” Past tense duly noted. Yes, we’ve seen these post-apocalyptic urban warriors on runways before. Chow and Osborne added a gauzy romance. Fairytale militants? There’s an idea. But they covered their bets by dissolving a woven DKNY logo into a torrent of loose threads, acknowledging that nothing is certain in the future of these designers.
strong>