In Paris, Fighting for Fashion in an Era of Stuff

Amidst a ‘supermarket of style’, only a handful of designers delivered fashion embedded with real emotion, reports Angelo Flaccavento.

In Paris, Fighting for Fashion in an Era of Stuff

Amidst a ‘supermarket of style’, only a handful of designers delivered fashion embedded with real emotion, reports Angelo Flaccavento.

PARIS, France — The Paris Fashion Week which closed yesterday was a long and largely unsatisfying ride that left me craving more fashion with a capital F. There were few truly outstanding shows, including Rick Owens' resilient take on fertility and nomadism to Undercover's walk on the wild side of demure. Also at the top of the list was Loewe's tightly curated mash up of ethnic influences, Yohji Yamamoto's ode to deconstruction, Céline's pragmatic sense of chaos, Miu Miu's take on the real world, Thom Browne's otherworldly couture and Sarah Burton's foray into the English garden armed with the sharpest scissors and a poetic imagination for Alexander McQueen.

But there’s little doubt that Paris was flooded with a ton of lifeless clothing created on auto-pilot by tired design teams with no real time to develop soulful ideas. Indeed, as I sat in the audience, desperate not to be distracted by the grandiosity of the sets — from Saint-Laurent to Chanel, all the bigwigs stretched their show muscles a lot this season, delivering memorable mise-en-scènes that were as fabulous as they were ultimately empty — I couldn't help thinking about Ted Polhemus’ “Supermarket of Style”. 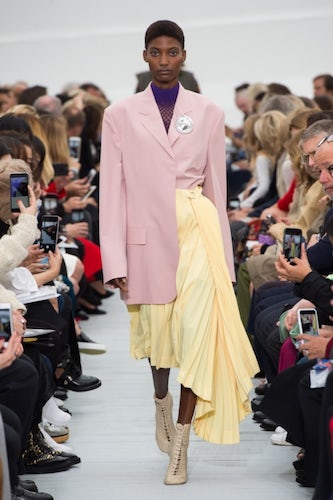 While Polhemus astutely observed that contemporary style was a game of appropriation and remix where people can shop for stylistic identity at will, divorced from once-orthodox subcultural codes, I see the “supermarket” — a place filled with generic product — as a perfect metaphor for today’s catwalks.

Welcome to the Era of Stuff. Because that’s ultimately what Paris was all about. There was certainly an abundance of stuff, assembled without a particularly poignant point of view at Givenchy, where Clare Waight Keller showed her debut collection, rejecting Riccardo Tisci's dark and sensual idea of French chic in favour of a freewheeling eclecticism that felt largely indebted to Hedi Slimane's Saint Laurent, minus the seedy underground zing. Of course, this being a debut, we've got to give Waight Keller some time in order to settle and fine-tune the recipe. She really needs to find her own voice and say something, if not original, at least personal.

The same applies to Natacha Ramsay-Levi's debut at Chloé, which was assured and sharp but still felt heavily redolent of what the designer had been doing under Nicholas Ghesquière at Louis Vuitton — you know, angular stuff and skinny tailoring worn with pointy boots and so on. Ramsay certainly has a point of view — and guts — but she also needs to leave the nest. Another debut, another lukewarm result: Serge Ruffieux's first outing for Carven was funny and very French, strong on shoes but somehow lacking strength and ultimately coming across as overly safe. 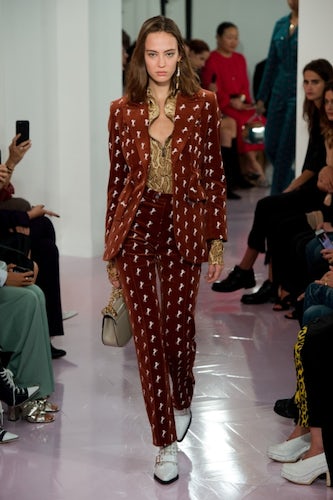 Dior was clearly a supermarket, no matter what kind of feminist “blah blah” is pasted onto the clothes. So, too, was Louis Vuitton, where Nicholas Ghesquière went time travelling, clashing frock coats and running gear, corsets and sneakers. It was a smart idea that made for some smashing pieces, but the result came across cold and a little forced. Chanel was so heavy on repetition, and so full of product — from clothing to clear PVC accessories — that it looked almost out of focus, complete with a cliff and waterfall set up that, in these grim times, seemed like a needlessly grand waste of money.

At Saint Laurent, there was also a lot stuff — from bohemian nods to couture ruffles 'n feathers — but they were coherently culled from the archive and given a sharp, hyper-sexy spin by Anthony Vaccarello, who continues to toy with the idea of vulgarity and delivering a bombastic image. There are women out there who love to put all their sensuality on display and he caters exactly to that audience. His clothes look better on the rake-thin, aggressive-looking models he favours than women with normal bodies, but then again, fashion is all about the urge of the purchase stemming from the idea that a dress can turn you into a fabulous deity. One way or another, this season Vaccarello delivered a punchy message. Truth be told, there were quite a few nods to Isabel Marant in the mix. With her penchant for soft boots and micro-minis, Marant is, in fact, the unsung hero of the current Paris look, also seen at Givenchy and elsewhere.

Style as a supermarket and assemblage as the message has always been Miuccia Prada's ethos and modus operandi. This season, in a very strong Miu Miu collection that acknowledged the real world and the irreverence of the youth — just don't call them Millennials — the designer showed that, where others are now, she was first. At Balenciaga, meanwhile, Demna Gvasalia did Vetements more than ever, with an abrasive grittiness and a cynicism — the platform Crocs, the heavy Bless 'n Sacai references in the hybrid clothing — that left you speechless. This outing was a bit of a faux pas, honestly, dangerously blurring the line between Gvasalia's two creative acts, though once again (and smartly) heavily product oriented. 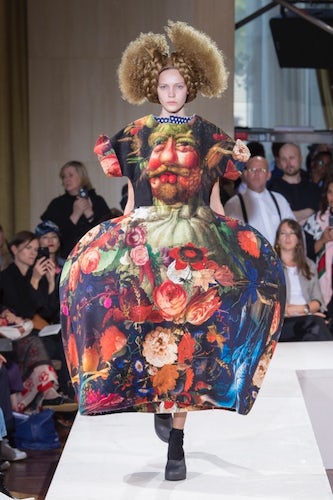 All in all, this was largely a sparkly, glamourous season. Dries Van Noten showed a sparkly galore of prints and womanly silhouettes, while Pierpaolo Piccioli, at Valentino, brought back the glamour and the ruffles that Mr. Valentino himself was known for in the 1980s. The very Valentino-esque section in the collection was smashing: the most convincing part in a lively show that nonetheless went into too many directions, from elevated sportswear to armour-like tailoring. There was sparkle — of the 1950s variety — at Undercover, where Jun Takahashi's tour de force in double-facing, with every outfit hiding a completely different one on the reverse side, was one of the highlights of the season. Another highlight was Julien Dossena's shimmering disco outing at Paco Rabanne, rooted in the designer’s will to revive and modernise the feisty streak of the brand's identity.

The biggest winners were those who stayed focused with single-minded purpose, exploring one idea — even the idea of multiplicity — without sounding obtuse. Among them were new brands such as Beautiful People and Atlein, who turned the problems of being small into a stimulus to deliver impact, as well as established designers like Rick Owens, whose consummate showmanship is matched only by his wonderful way of dealing with the world, and Jonathan Anderson, who has carved a unique identity and fruitful art-meets-commerce niche for Loewe.

Finally, there’s Rei Kawakubo, who keeps following her very own abstract-sculptural path to great effect. It would be thrilling, at some point, to see her test new grounds — it's been a while since a Comme des Garçons outing struck as a totally unexpected experience — but hers was without doubt a deeply emotional show. Which is just what the system needs. Emotions, you know: soulful ways to turn stuff into fashion.