PARIS, France — There’s been little time for any sense of ‘warm-up’ in Paris this season, with Maria Grazia Chiuri’s Christian Dior show moving dates (to kick off day one) and Gucci gate-crashing for a one-time-only, off-schedule show the same night. This meant the independent voices of the Paris schedule were intermingled with the heavy-hitters more than ever, putting a new spotlight on the often quiet early days.

Tackling the market’s current state of stop/start, anything-goes experimentation, the London-based duo Marques' Almeida also decamped to Paris, where it did not show Spring/Summer 2019, but a delayed resort collection with a smattering of see now, buy-now products woven in. 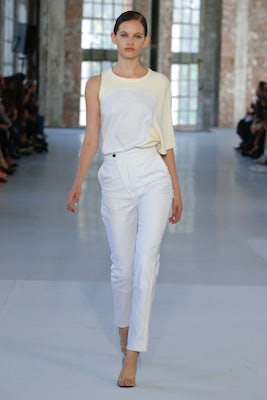 Paris is a big stage where it often pays off to be radical, however the Portuguese pair’s translation of a free-spirited summer in their homeland translated with difficulty outside their London cool-girl context. Their claim to fame is firmly rooted in frayed denim, and whilst the humble fabric has had a firm place on the Spring/Summer 2019 runways, it took a backseat to bold checks, satin florals, and oversized sportswear silhouettes here — to their detriment.

Where their signature did appear, it looked great tasseled with fringe or doubled as a skirt and apron top, less so on a puff sleeved vest. Paris may be a chance for them to re-establish their codes for a new audience, but they’ll need a second round.

Tuomas Merikoski’s brand Aalto has a clearer track record in the city yet, unlike Marques' Almeida, "hyped" has never quite been a descriptor. Quirky, forward-thinking elegance has, and Merikoski's designs continue to percolate with ideas that range from sporty, street-wise details (he’s not afraid of a logo) to artier, girly-er looks.

His latest collection approached the brand’s namesake shape (Aalto is ‘wave’ in Finnish), a relatively harmonious construct for summer clothing, and one Merikoski approached without so much as a whiff of irony. 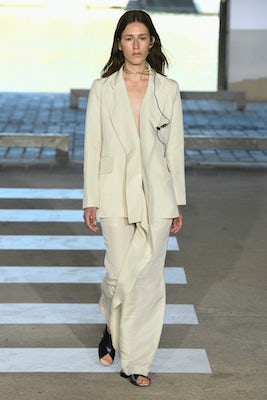 For him, waves meant twisted and curved necklines, cutaway tailoring, twisted drape and an oceanic palette of iridescent foamy whites and cobalt blue complemented by lifeguard neons. The result worked best in its softer iterations, and less in the brand’s all too eye-catching accessories. Let’s hope logomania’s time is up, too.

Atlein, by French designer Antonin Tron, began his young brand two years ago with slinky dresses in artfully draped jersey. Think Madame Grès meets Helmut Lang, or thereabouts. Today, he’s expanded across cut-and-sew categories and knitwear into a fully-fledged wardrobe: a sensual one, with a youthful, minimalist edge that positions him in good stead against other elevated occasionwear in the market.

In a stripped-back construction site, his equally stripped-back clothes looked sophisticated and effortless, in cheerful block colours and primitive line prints that gave new life to the sometimes one-note nature of his precisely-crafted clothes. That said, Tron still shines at his simplest: an ivory drawstring number on Aymeline Valade was a veritable knockout. 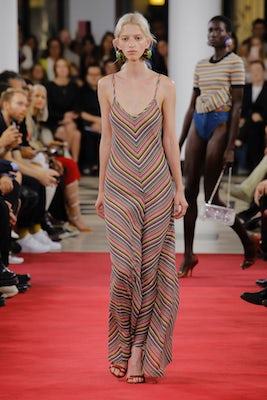 Today it’s hard to connect Y/Project’s origins with its late founder, Yohan Serfaty, so much Glenn Martens has made it his own. And that’s a great thing. The Belgian has carved out a cerebral niche in the wake of Demna Gvasalia’s Balenciaga and evolved it season after season into such its own proposition that the comparison need no longer be voiced.

Spring/Summer 2019 was Martens’ most sophisticated outing to date, not only in its execution (bravo too to his stylist, Ursina Gysi) but in its subject matter: he approached eveningwear and truly ladylike ensembles with the same relish with which he slices up denim jeans and adds drape to the humble polo shirt.

Case in point was look 37, where a box shouldered red coat was lopped off at the midriff, sheathed in tulle, and paired with a cricket sweater transformed as a skirt. Elsewhere, fabric "feathers" created ironic textures like futurist feather boas, and a fantastic sweetheart neckline turned a grey marle sweater into a subversive evening option. Who knew operatic streetwear has a future? Glenn did, apparently.