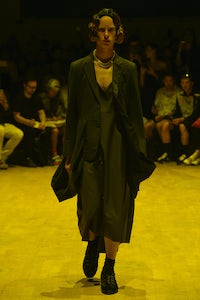 PARIS, France — Virginia Woolf’s novel “Orlando” is the story of an Elizabethan poet who changes from a man to a woman, and goes on switching genders for centuries, a consummate self-creation with no fixed identity. It was published in 1928, but its cultural resonance has blossomed with the passing of time, for obvious reasons. It was a favourite of Karl Lagerfeld’s. Tilda Swinton played Orlando in Sally Potter’s 1992 film adaptation of the book, which is why she could be found playing Orlando once again at Lagerfeld’s memorial on Thursday.

Then Orlando re-emerged on Saturday, in a twist of fashionable fate, at Rei Kawakubo’s show for Comme des Garçons. The designer offered more detail than usual about her latest work. Apparently, it’s the first act in a three-act drama. The second will be the Comme des Garçons women’s show in September. The third will be the world premiere of Olga Neuwirth’s opera “Orlando” at the Vienna State Opera in December, with costumes by Kawakubo.

It is easy to see the appeal for the story for her. “Transformation and liberation through time,” was the phrase she offered as insight into her new collection. Born in the 16th century, Orlando touches down throughout history till the very day of the book’s publication in October 1928 (a very artful piece of cross-promotion by Woolf and her publisher).

The Comme collection similarly skittered across time zones: 16th century infanta sleeves, 18th century striped ruffles and petticoats, Victorian rectitude, governess-y Edwardian elongation, ending with the profligate Internet Age: digital prints and a Perfecto wrapping a dress covered with memories of Maui. Strings of pearls and gemstones were printed on T-shirts. Fakes – the end of history. The models got a little friskier, like they’d shrugged off the propriety of the past, which throughout the presentation had been defined by their actual pearl necklaces and their tidily marcelled hair. (That would have been the mode of the moment when Woolf’s book first appeared.)

All of these details being part of a men’s collection seemed so appropriate to “Orlando” that you were inclined to wonder whether Kawakubo wasn’t testing out ideas for the opera. But they were also in keeping with her regular challenges to fashion orthodoxy and her appetite for transgression. Here, an oily quilted jacket over a crocheted top or a dark brocade trailing threads was less suggestive of menswear — or womenswear, for that matter — than a faded aristocracy, operatic in its decadence.

The dying fall…it’s camp, and, only last season, Kawakubo was expressing her fondness for that idea as a different energy. Vincent Glanzmann provided a soundtrack of live, jazzy drumming, into which he inserted the jaunty swing of “If You Never Fall in Love with Me” by Carmen McRae. “I’m not the girl I was before, ‘cause now you own my heart forever more,” she sang. That’s the reason Virginia Woolf wrote “Orlando,” because Vita Sackville-West was breaking her heart. Thank you, Rei Kawakubo, for reminding us that some things never change.