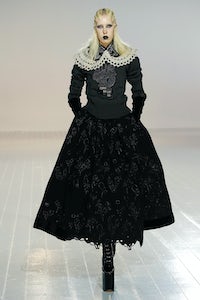 NEW YORK, United States — New York Fashion Week was backloaded with heavyweights. The last day opened with Ralph Lauren, closed at Marc Jacobs, with Calvin Klein as ballast in the middle. (Tom Ford was also on the agenda this season, until he decided to go direct to customer in September.) So, in not much more than eight hours, you could get a sense of where American fashion has been, where it is now, and where it might — or would like — to be going, as defined by its three biggest names.

Not for nothing was Jacobs the closer. The pleasurable sense of climax he brought to the calendar was like our reward for the longeur of the often-frigid week. His shows are ten-minute shots of purest sui generis spectacle. And yet, in their own way, they have always had more to say about New York than any other designer. Jacobs has travelled through time and space to style a whole picture book of urban fairy tales. He said Thursday’s was the Gothic-tinged downtown scene. But that was a very nebulous starting point.

A more particular one was the designer’s Spring extravaganza, a million movies coming to life all at once, a production so exhausting it left all involved with a desire to never see or hear it mentioned ever again. So, naturally, it had to be revisited, in the interests of putting the demon to rest. The negativity was transmogrified into negative images of Spring’s wardrobe, the farrago of colour reproduced in monochrome. If Spring was Technicolor, Autumn/Winter was black & white. The lights!camera!action! red carpet down which the audience walked last season became a white wooden floor impeccably lacquered into glistening nothingness by Stefan Beckman and his brilliant team. Spring’s blasting big band was reduced to sparsely sounded chimes, almost Japanese temple music.

And the clothes? “We amped up the opulence,” Jacobs enthused. “Larger and larger. We’re doing a show! That’s what I love about fashion.” And each girl was a show unto herself, raised high on a pedestal of eight-inch platform shoes. The same exaggerated proportions carried over into what they were wearing. When a Gothic highschool Cinderella walked by in a supersized Bobcats baseball jacket and a skirt that was a massive dome of black PVC, you prayed her prince would come in one of Raf Simons’s equally gigantic letter sweaters.

The black & white begat echoes of The Addams Family, Beetlejuice and all those little trading figurines Tim Burton created. Everything looked richer in monochrome, like the torrents of jet beading and the glittering embroideries: a crystal cobweb laid over a bed of black sequins, beaded rats playfully scampering round a jacket.

Lady Gaga made a surprise appearance in fur-trimmed grey flannel. It was decided only two days earlier, when she told Jacobs, “I want to be just another beautiful girl in your show.” She was a perfect fit. In their spidery Alice Cooper eye make-up and Sally Finkelstein hair, the models might have been her Little Monsters.

How easily, almost dismissively, Jacobs talked about the extravagant expenditure of time and effort that created such a performance. That’s how he has always made it look so enchantingly effortless, of course. Consummate showman that he is, he appears never less than utterly sure of himself. 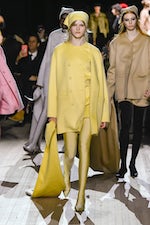 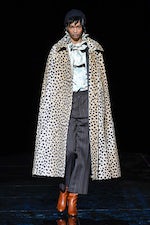 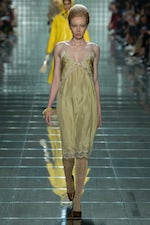 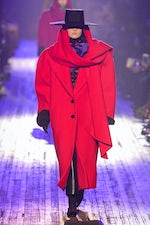