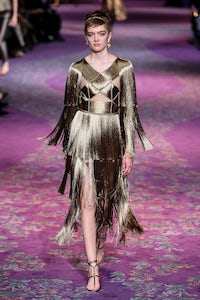 PARIS, France — Courtesy of the Medici-like patronage of designer Maria Grazia Chiuri, the feminist artist Judy Chicago was able to turn Dior’s show venue into a goddess temple on Monday. Now an effervescent, purple-haired octogenarian, she called it her greatest creative opportunity. “I’ve never had this kind of sponsorship.”

The deep pockets of said sponsor were certainly evident in the specially-woven, flower-patterned purple carpet that stretched all the way from the back door of the Musée Rodin through the garden, into the show tent, then onwards to cover every square inch of the backstage area. Drones hovering high above revealed the temple as a massive, abstract female torso. Chicago envisaged us entering a womb. At the end of the runway was a huge banner, posing the question “What if women ruled the world?” The venue was hung with others that elaborated on the proposition, all embroidered at a school in India where women are being trained in a craft that has been traditionally male. The slogans ran from the general — “Should God be a woman?” — to the specific — “Would there be private property?”

The connection between fashion and art has gone very public this season. Chicago wondered if there could be a really positive relationship between the two, given how little small talk there has been. “Jeff Koons plopping old masters on purses? Where is the writing about that? Is it the only way fashion and art can combine?” Still, she’d felt an instant, genuine kinship with Chiuri since the designer invited her to last season’s couture show. That was Chicago’s first exposure to the rituals of haute couture. She loved that the shoes were a female-friendly flat. “So different from other shows.”

Chiuri, for her part, lauded Chicago’s pioneering feminist work “The Dinner Party”, now permanently installed in the Brooklyn Museum. “It’s a piece of art that celebrates women of the past who’ve been forgotten,” she said. “Judy made it possible for women to believe they could be artists.”

But for Chiuri, there was something beyond the dialogue between femininity and creativity. There was also the call of art vs. the demands of motherhood. You got the feeling that issue — essentially the having-it-all debate — has nagged Chiuri for a long time. But there wasn’t a hint of doubt in the collection itself. “To collaborate with Judy is a dream,” she said. And she made a collection that was, accordingly, almost dream-like in its gilded celebration of woman as goddess.

At its heart was the peplos, the draped tunic that was the daily attire of women in Ancient Greece. Simple, but hard to get right. “It’s impossible to make a toile with this,” said Chiuri. “You have to use the real material.” In other words, the process of creation was too expensive to leave much room for error. Whatever effort was involved hardly mattered once the goddess gowns hit the catwalk. So languid, so dreamy, with golden laurel leaves wreathing necks and waists.

“I don’t want what I do to become a costume,” Chiuri insisted. “Real jacket, real pants, real dress.” They were there, in pantsuits in antiqued gold jacquards at least. But this was more a collection where the designer committed to exalting what Chicago called “the female divine.” And if it essentially struck a single note, it was a long, glorious, golden one. “We did this together,” said the artist, marvelling at the achievement.