BoF’s editor at large looks back at one of Nicolas Ghesquière's most memorable collections for the house — one that would influence fashion for years to come. 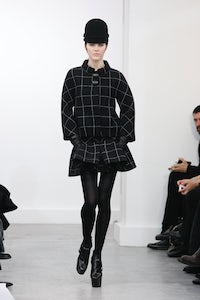 BoF’s editor at large looks back at one of Nicolas Ghesquière's most memorable collections for the house — one that would influence fashion for years to come.

When Nicolas Ghesquière was appointed Creative Director of Balenciaga in 1997, it was a precursor of the nothing-to-lose gambit that would later pay off to dazzling effect with Alessandro Michele at Gucci. But to this day, there is something about Ghesquière’s promotion which has a particularly inspirational tang of vision-cum-desperation. He was 25, the house was 60, its glorious past shadowed by a moribund present. Barely five years later, Ghesquière was regularly tagged the most influential designer of his generation. In 2006, he was named to Time Magazine’s 100 Most Influential list.

That was also the year when he directly confronted the intimidating legacy that Cristóbal Balenciaga left when he closed his couture house in 1968. When I think of Cristóbal, I see transcendent silhouettes, gravity-defying drape, an obsession with pure form in fabric that no other designer was ever able to match. And that’s what Ghesquière took on with the Autumn/Winter collection he showed in February 2006. “It’s the first time that each look has a link with history of the house, in total or in part,” he told Suzy Menkes.

His confidence was high. Ghesquière had been advising on a Balenciaga exhibition that was scheduled for July at the Musée des Arts Decoratifs. Cristóbal’s codes were running through his veins. And so they were explicit in the silhouettes of Ghesquière’s designs: the flared skirts, the rounded shoulders, the waistline up here, the standaway collars (Balenciaga insisted they lengthened the neck) and the forward thrust of the clothes. But it was stunning that something so referential of the past could look like it had come from the future. Ghesquière nailed Balenciaga’s intimidating grandeur but made it NOW… or just enough ahead of NOW that it felt modern.

When I dredge Autumn/Winter 2006, there are two nuggets of fashion gold that stick in my brainpan: Kate Moss whirling in hologram at the end of Alexander McQueen’s show, and Hilary Rhoda in a windowpane-checked suit at the beginning of Ghesquière’s. Add the hat, the gloves, the platform shoes and stockings, the perfectly monochrome silhouette, and you had a vision of fashion rigour that truly felt like the shape of things to come. Ghesquière showed in his usual spartan space on Rue Cassette, but in this instance, the minimalism of the environment enhanced the collection’s purity of form. The models walked to a piece of music called “Vermeer’s Wife” by Michael Nyman which sounded almost romantic, but place it in the context of Peter Greenaway’s “A Zed and Two Noughts”, the film for which it was written, and it transmuted into something quite sinister.

You can blame soundtrackist Michel Gaubert for that, but maybe there was something a little sinister about Ghesquière’s models. The domed hats, the vertiginous shoes, the uniformly black, spidery legs created an almost supernatural illusion, in the same way that the women never really looked of this earth in Avedon and Penn’s photos of Balenciaga couture in the 40s and 50s. But maybe an otherworldliness infused all Ghesquière’s collections for Balenciaga. There were the supernally elongated proportions, and then there was the mindboggling degree of surface detail, dense textures that defied comprehension.

It’s always said that every dog has its day. I virtualled my way through Ghesquière’s collection for Louis Vuitton on Tuesday and mused on the good old days, as you do. Not nostalgic, mind you, because time demands adaptation. Change or die, basically. But I was thinking about the challenges that fashion sets its adventurous spirits. And under the shadow of the pandemic, that’s become all about re-setting. “Being neutral can be radical,” Ghesquière declared in the Q&A that accompanied the show. I felt his collection was a canvas for the statements he felt it was necessary to make in these stand-up-and-be-counted times. The neutrality lay in the non-binary nature of the clothes. Ghesquière has always cut the best pants, his acolytes insist. Here, the second-skin pipestems of Autumn/Winter 2006 were replaced by multi-pleated chinos. Undoubtedly the best non-binary pants of the whole season. Otherwise, cartoon-y statement dressing ruled.

Curious that the show unfolded on line against the majesty of Wim Wenders’ “Wings of Desire”. Ghesquière indicated that its genderless angels “choose to experience life thanks to the power of love”. Which is one way you could say that Ghesquière’s degree of engagement with the real world has intensified. At the same time, the rigour that defined his glory days has relaxed. It had to happen. The alternative would be burn-out. Doesn’t mean I can’t look back at that 2006 collection and not marvel at a moment when the future took on a strange, seductive shape. And love had nothing to do with it.