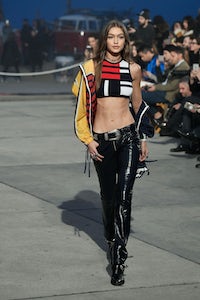 Last year, Hilfiger and his team transformed New York City’s South Street Seaport into a carnival of riches for consumer and industry guests alike. On Wednesday, he headed to Los Angeles to take #TommyNow up a notch — or several — with #Tommyland, transforming Venice Beach into the ultimate amusement park, complete with flamethrowers, a high-flying Kamikaze pendulum ride and a live musical performance by Fergie.

The day’s atypical fog may have prevented those perfect-LA-sunset Instagrams that Hilfiger’s influencer-studded front row typically aims for, but Cameron Dallas, Kaia Gerber, Sofia Richie and the like had plenty of #content to work with.

As the sun set and the spotlights hit the runway — with whiffs of (very legal) marijuana wafting through the air — Hilfiger muse-and-collaborator Gigi Hadid appeared in a geometric, colour-blocked crop-top and leather pants of her own design, a sporty yellow anorak draped cooly over her shoulders. Like every look in the collection — from the American-flag patchworked bomber jacket to the oversized rugby shirt worn as a dress by Joan Smalls — each item was made available to purchase immediately on Tommy.com and Thursday at retail locations around the world. The 2,000 consumers and 1,000 members of the trade that attended the show in person had a head start at concert merchandise-style booths at the venue. 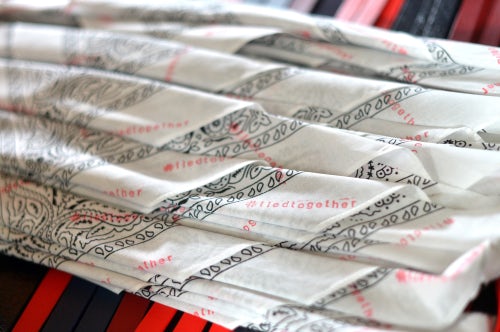 With metallic leathers, floral-calico fringe and shimmering knits, the lineup was a spangly ode to the USA, a loving reminder of the country’s wide-eyed optimism in a time when it feels so divided, fuelled by newly installed, forever-polarising Trump administration. Hilfiger’s cadre of models was also united by a white bandana tied on each of their wrists and printed in red with #TiedTogether. In fact, the designer was the first of this fashion season to support BoF’s new initiative, which aims promote unity and inclusivity for all humankind through a singular visual statement.

Hilfiger promises that #Tommyland is just the beginning, and hopes to take the #TommyNow show global in seasons to come. But in an era when sense of place feels fleeting — and designers are fleeing their home cities for other places and other fashion weeks — it was symbolic that this show celebrated a quintessential American city. When Hilfiger walked the runway, a white bandana tied to the belt loop of his chinos, it was easy to believe we could all be united once again. As California goes, so goes the nation.