PARIS, France — “Fashion reflects. It responds to its environment. Check the headlines, there’s darkness at the edge of town, and protection against that darkness is critical,” wrote Tim Blanks in London at the beginning of the Autumn/Winter 2016 menswear season. Indeed, designers’ pre-occupation with our troubled and uncertain times set the prevailing mood of the season.

The threat of widespread war, a global refugee crisis, a shaky global economy, the continued rise of religious extremism, increasing inequality and the spectre of ecological horrors — these strands of sadness and worry appeared in ways big and small on catwalks across London, Milan and Paris.
Largely, designers fell into two camps. There were those who offered protection, sometimes drawing on miltary themes. And there were others, who, like in 1930s Berlin, sought solace in pure escapism, which sometimes took a hyper-decorative even bacchanalian bent. Despite such a troubling context, a number of designers showed their prodigious skill, reflecting the times we live in with unfettered and powerful creativity.

Here are BoF's Top 10 shows from the European collections. 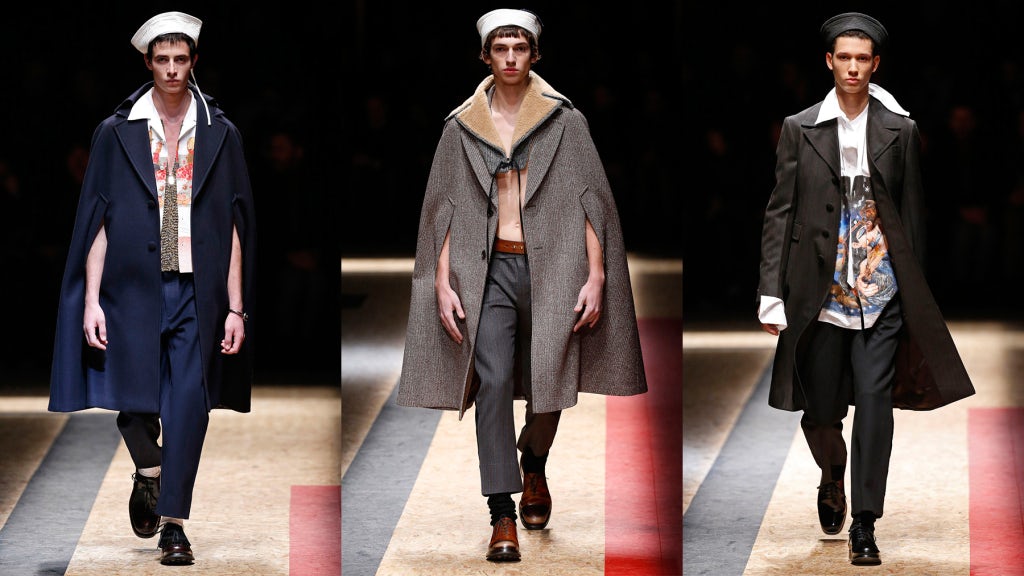 Prada menswear of late has been a little desultory. Rich in ideas maybe, but erring on the side of dreary in the actual delivery. All that changed tonight. Miuccia herself reeled off a litany of positives after her show: “Drama, passion, heroism, romanticism…” The new men’s collection had all that and more. The first looks instantly evoked sailors in their little hats, navy jackets, capes and peacoats. Waxed indigo denims looked like clothes for the working tar, and there were shapely officers’ coats for the men above deck. Fabulous shirt prints seemed to depict gods and monsters, the kind of mythic beings that sailors would spin yarns about when they returned from their travels. On closer examination, one tableau featured the likes of Pasolini, Che Guevara, Nina Simone and Sigmund Freud wrestling with classical figures. Watching her latest collection, one thought irresistibly asserted itself: clothes make memories, memories make history. 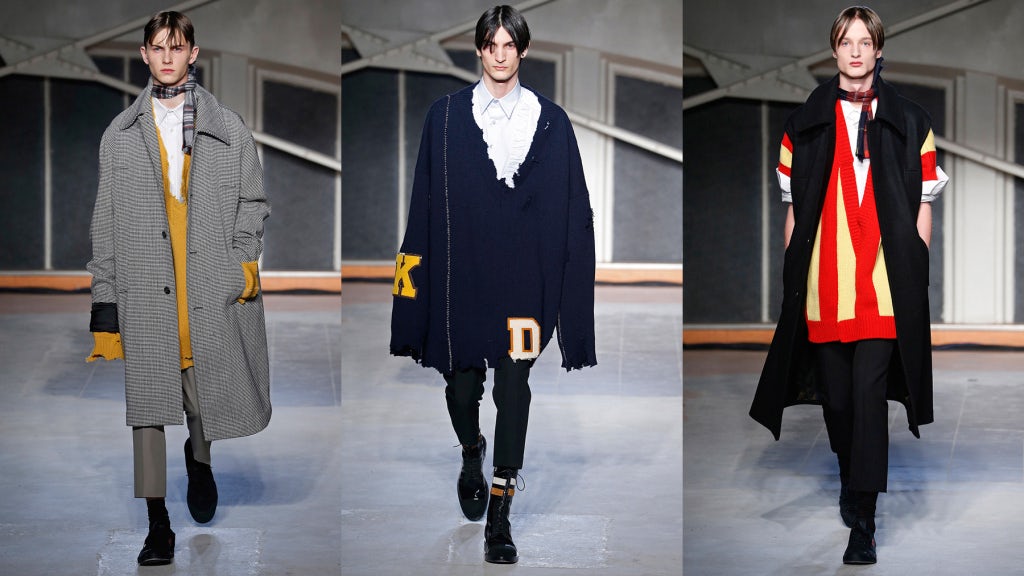 This season’s Raf Simons presentation stepped fearlessly through David Lynch’s nightmarish mirror of apple-pie Americana. Nightmares and Dreams he called it, and it was a brilliant, disturbing descent into a world where imperfections ruled, where youthful idealism had been literally chewed to shit, where the woods were dark and full of danger. Welcome to Raf’s nightmare. It was by turns funny, macabre, evocative, provocative, and it merited analysis — like the one you’ve just been subjected to — because so clearly clarified Simons’s state of mind, the bird flying free from the big Paris fashion cage, finding his wings again. Reflecting on that clarity, and the twenty years — already? — that he has been doing what he does, he said, “You start to see you have your own uniform. And there it was: the skinny and the oversize, the moth-eaten and the bandbox new, the innocent and the experienced. 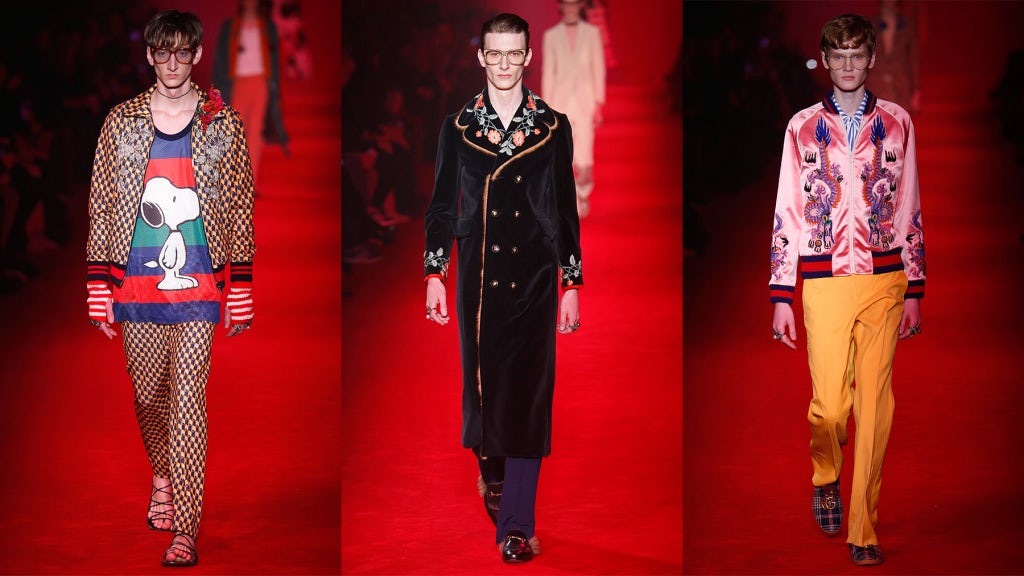 “There is something creepy in beauty,” Alessandro Michele mused after the latest instalment of his Gucci revamp. “Every time I see something beautiful, I feel bad.” Which means his stomach must have been in agonising knots after a show which featured so much that was rich and strange and gorgeous. The space was reconfigured as a giant red-lit hall. It felt just like the reception area in the Overlook Hotel in Kubrick’s The Shining. There was even a vintage lounge act on the soundtrack, supplying the kind of rinky-dink music that accompanied Jack Torrance’s descent into madness. “I wanted [the] music to make you feel like you were in between a dream and a nightmare,” Michele said. The red light and the huge swathes of curtain invoked the limbo land of Twin Peaks as well. You have to osmose such reference points to appreciate the worlds that Michele straddles. Between beauty and madness — there lies Gucci. 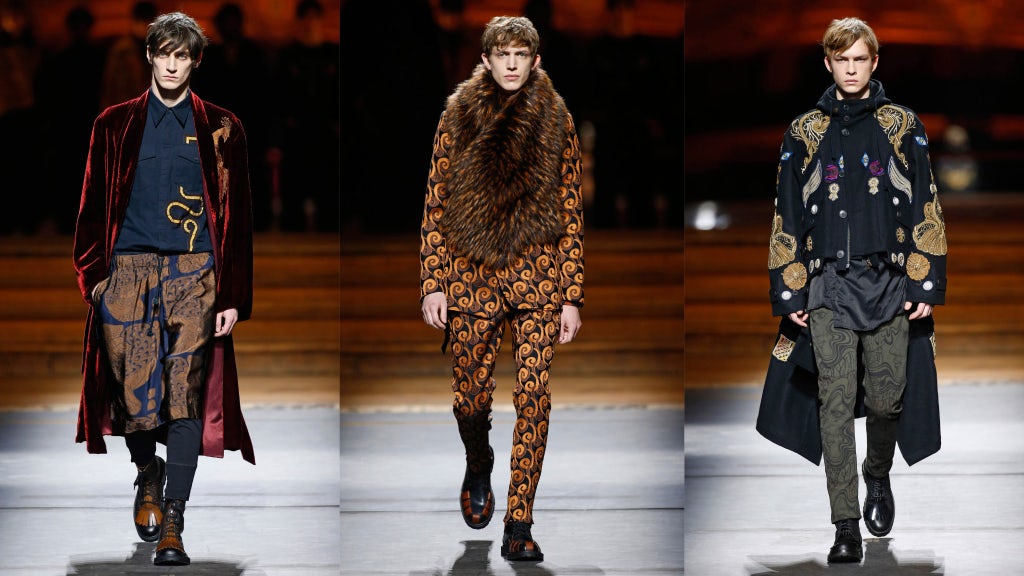 Dires Van Noten mounted his salute to psychedelia on the stage of the most august cultural institution in Paris, the Opera Garnier. The photographers were at the very front of the stage, the models posed in a tableau at the very back, where the dancers usually congregate. The audience lined the walls of the acreage between. It was as awe-inspiring as a privileged glimpse behind the scenes of such a place invariably is, made even more so by the fact that Van Noten had been waiting 15 years for the opportunity. For his collections, Van Noten has the deep reservoir of his own past to draw on, and he revisited it persuasively. The oversized 1940s-style suits were a reminder that, of all the designers who ever drew inspiration from David Bowie, his fandom was the most convincing. 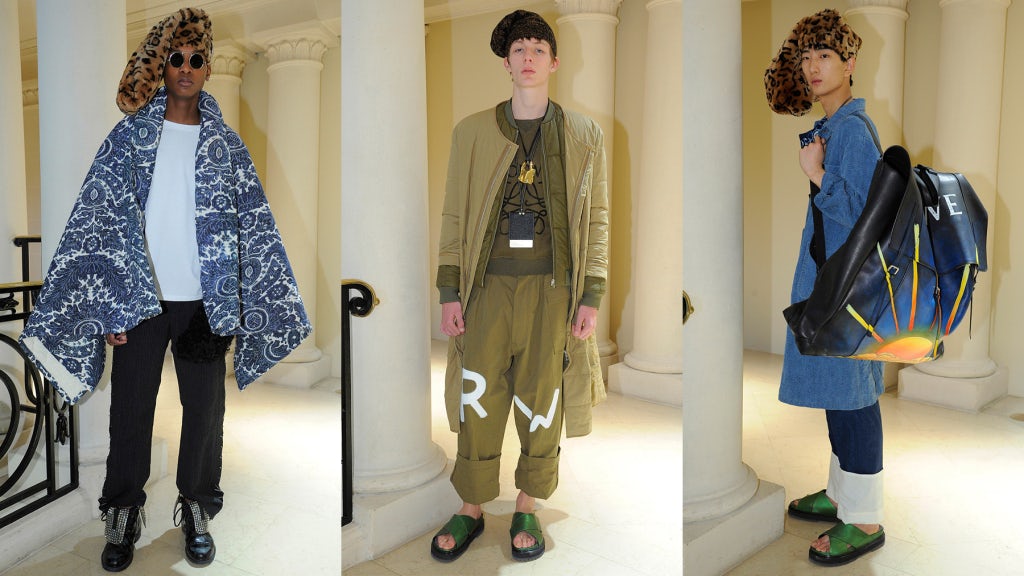 Jonathan Anderson is a designer who revels in the perplexing, but the only thing unexpected about his new Loewe collection was its rustic charm. It’s something he’s already done very well at Loewe: approaching the luxury label’s Spanish heritage from left field, focusing not on sleek, chic urban gloss, but on the handcrafts of the finca. Formentera, not Madrid. Except it was Cuenca, with its extraordinary mushroom-shaped rock formations, and psychedelic mineral deposits, that Anderson was inspired by this time round. So, the mushroom was a key visual motif and the primordial nature of the landscape made Anderson very partial to a primitive finish. “Going into the wilderness,” he called it. Wrap coats in very traditional herringbone and glen plaid were ragged little things. A trenchcoat looked like it had actually seen action in the trenches. There was a home-loomed feel to linen shirts, which featured a raw animalier pattern on the pocket. “The most normal collection I’ve done, but the most difficult,” said Anderson. 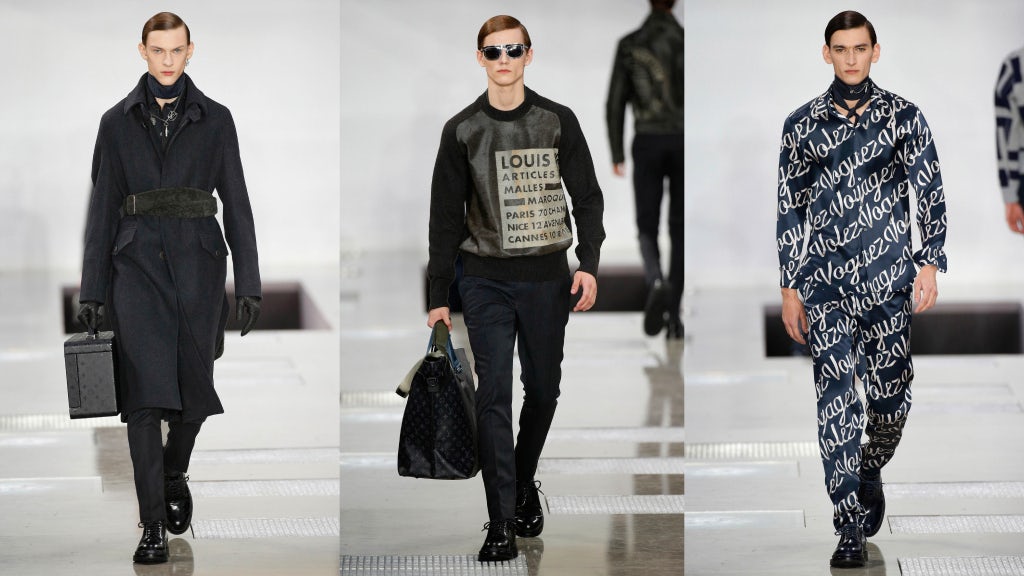 After last season’s nod to Vuitton’s London roots, Kim Jones wanted to celebrate Paris, to mark his fifth year with the company. The collection had an undertow of dark allure, ably assisted by its lushly sombre colour palette and its striking casting. Many of the models looked like they could have been White Russian princelings in another life, washing up in Paris on a wave of revolution at home. They had clothes and accessories to match: dandy tailoring, languid jersey overcoats, and trench-coats belted with fur, ravishing shearlings, silver necklaces, and a whole history-book of Jade Jagger designed charms studding the silk scarves that wrapped their throats. Jones’ Paris was romantic, infused with the spirit of the artists, aesthetes and aristocrats in exile who fed the city’s creative fervour over the past century. The ghost of Cocteau hovered in the scribbles on silk shirts. The artful use of old trunk stamps as new branding was a reminder of the romance of travel that has always been LV’s calling card. 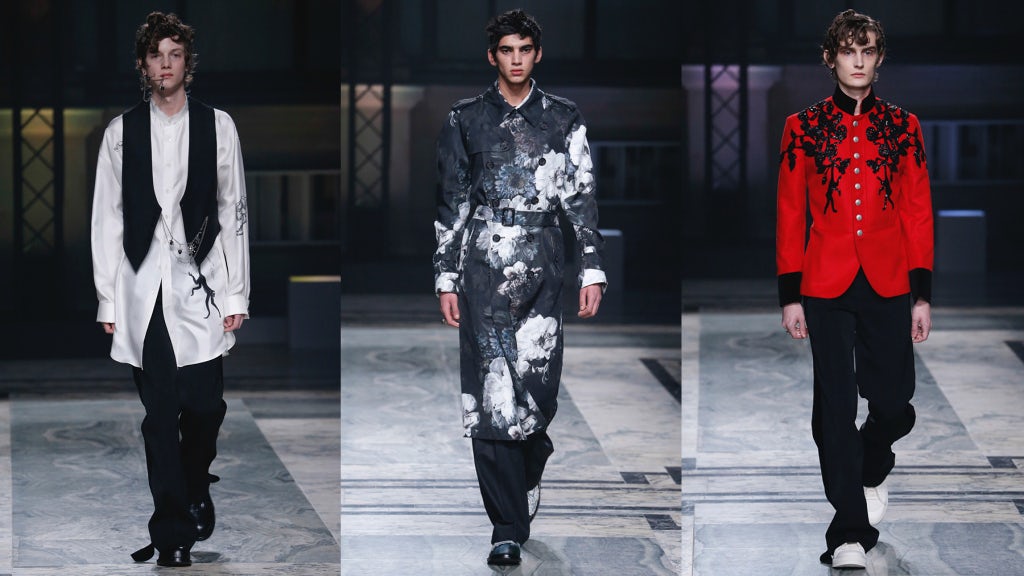 Historicism, romance and science: these were always ingredients in the heady McQueen stew, and it was reassuring to see them make such a strong comeback after Spring’s irresolute offering. The silhouettes were clear and classic, with the incontrovertible masculine edge only a military influence can bring: suits single- and double-breasted suits, trenches, greatcoats, a regimental-red cadet’s jacket.There were plenty of darkly alluring flourishes, like the band of chiffon that edged a soft-shouldered coat, the tulle-shrouded moths embroidered tone on tone on a pinstripe suit, or the silver chain harness of crosses and pearls that anchored a white silk tunic. That particular item accessorised Burton’s last collection for women, and it highlighted a compatibility between that and this one, which is high praise given that it’s not always been possible to place the McQueen man and the McQueen woman in the same room, let alone together. 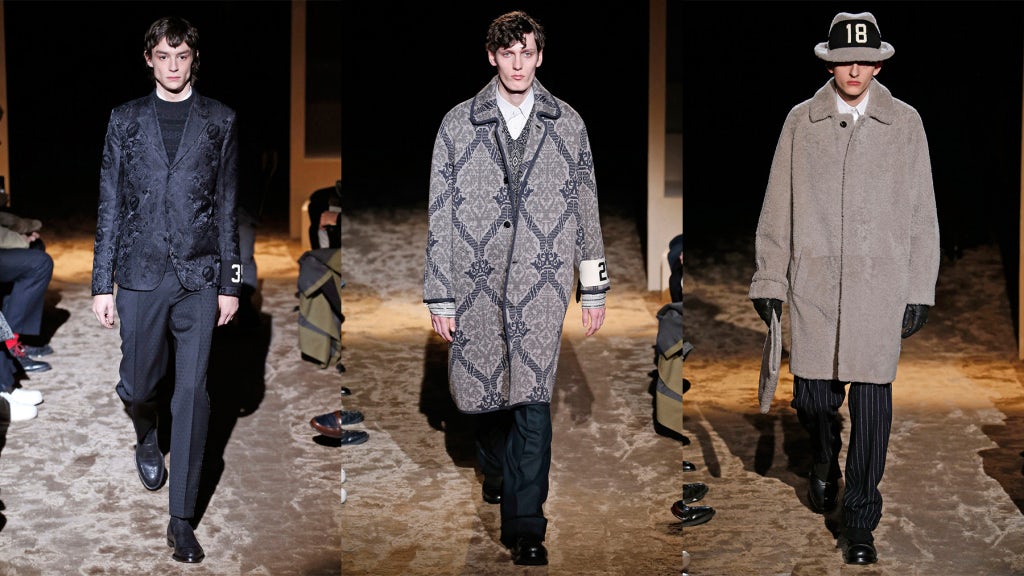 Stefano Pilati’s signatures were on parade this season at Ermenegildo Zegna Couture. His knack for defusing formality, for instance, most obvious with the broken suit, but he’ll also attach a drawstring waist to a pair of pinstripe trousers. He loves playing with volumes, as with trousers whose bagginess was emphasised by deep pleats (up to five on some pairs). And it wouldn’t be a Pilati collection without an undercurrent of the outré. The Zegna mills showed form with muted but plush jacquards, woven in patterns that were reminiscent of mosaics and tapestries. They were carried over into the footwear, micro-perforated in swirling patterns. But at the same time, there’d be a quilted bomber in recycled polyester, a reminder of the house’s facility with fabric technology. Elegance is a constant with Pilati. 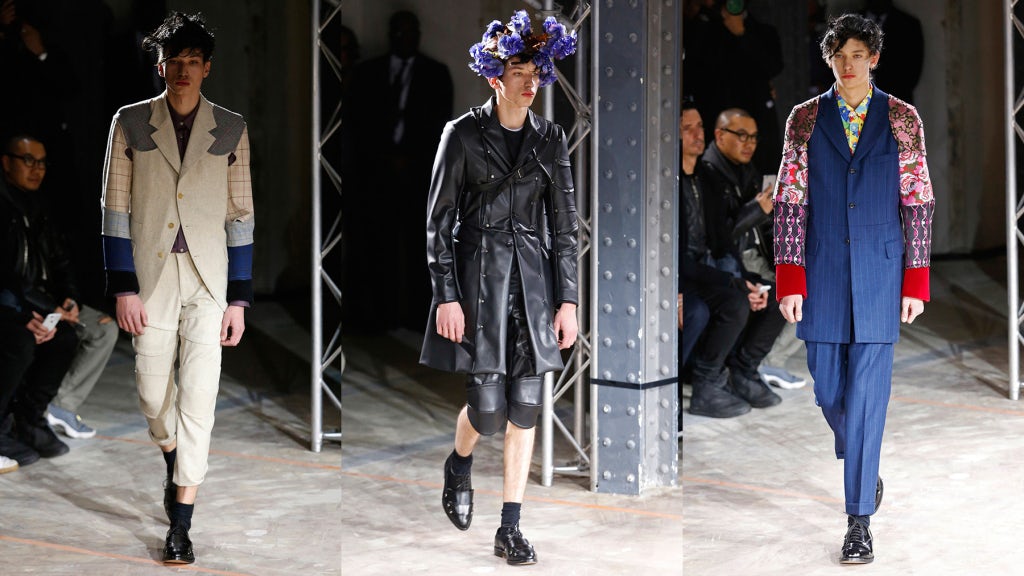 ​It is surely a measure of the global geo-political descent into ghastliness that Rei Kawakubo feels compelled — and comfortable enough — to make a comment. But what sentient soul could fail to acknowledge the abyss upon whose lip we tremble, and, should that soul have a public forum, make some kind of comment? There was poetry in her show today, in the way that the clothes mutated conventional men’s tailoring by revamping the articulation of traditional armour. Shoulder, elbow and knee pads appeared in traditional Savile Row fabrics, or in floral brocade, or in Art Deco patterns. Multi-layered sleeves were like gauntlets. The silhouettes were tail-coated, Victorian-elegant. The models had heads full of flowers, entwined in braids by longtime Rei collaborator Julien d’Ys. “Like Vikings,” he said. But that analogy was too aggressive for the tone of this collection. Kawakubo emphasised boyish vulnerability in Oliver Twist suits. As the presentation progressed, she also introduced a trippy element in abstract floral-printed shirts. An open mind is invaluable when, all around you, other minds are closing. 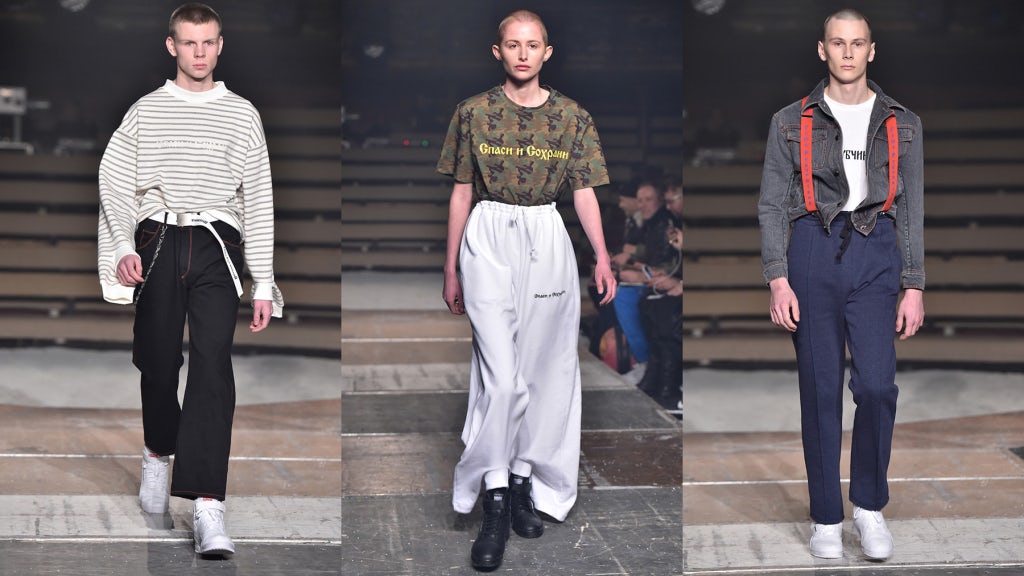 In Paris, this season, it is the Nineties all over again: neorealist fashion, gritty decor and casting rooted in raw reality. But it's a different kind of Nineties, set in the drab public housing estates of post-Soviet Russia, amongst a burgeoning rave scene, outcasts in vintage sportswear and the first whiffs of Western-style consumerism and a youth-fueled cultural underground. Blame Gosha Rubchinskiy for igniting the trend. He was there before anybody else. More a director with an eye for striking casting than a designer in the traditional sense, Gosha is the Harmony Korine of fashion. He finds beauty where other see alienation. He's able to turn the humble tracksuit bottom into a piece of art. This season saw Gosha growing up and out of the sportswear niche. Presented in a derelict theatre amid a thick fog, his collection was an affair of transmogrified urban-wear with twisted details like elongated sleeves and very high waists. But it's not really the fashion details that count here. Rather, it's more about the gang spirit which ultimately projects an allure of uber-cool.