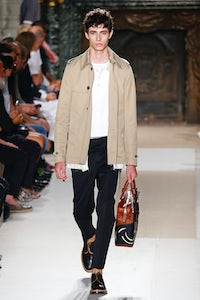 PARIS, France — You like your fashion deep? Maria Grazia Chiuri and Pierpaolo Piccioli can take you there… and beyond. The roots of their new menswear collection can be found in Unfinished:Thoughts Left Visible an exhibition currently running at the Met Breuer in New York.

The duo’s moodboards reproduced dozens of works from the show — Schiele, El Greco, Lucien Freud and Elizabeth Peyton, all of them in a state of perfectly unfinished suspended animation. It wasn’t like you could see actual co-relatives in the clothes (some amoebic Picasso shapes reproduced in camo-like applique, perhaps), it was more the open-ended stance that Chiuri and Piccioli took with their creative process, the idea that everything they left unfinished would be completed when the end wearer imposed his personality on it. Which is actually a lovely little paradigm for the relationship between designer and customer. “More intimate, more human,” said Piccioli.

So the exhibition inspired a feast of dangling threads, raw selvedge, not entirely finished shoes and hippie canvas clothing personalised with patches and mysterious insignia. A fierce utilitarianism imposed itself on worn, fitted denim shirts and jeans, or salt of the earth cotton workwear or camo jackets that were brutally patched together. The workmanship was exceptional, paradoxical in the service of something so raw. (And also in the price of the unfinished product.)

At the heart of the renaissance of Valentino’s menswear has been a dark seam of Americana. Alongside the camo and denim were varsity jackets and knitwear with motifs of snarling jaguars. Go Jaguars! There was also a passage of unstructured but polished black tailoring, more classically Italian, less interesting in this context. Where Valentino’s womenswear is the apogee of a particular kind of obsessive feminine perfection, the menswear thrives on boyish funk. How diverting to picture Miss and Master Valentino on a date. 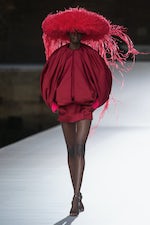 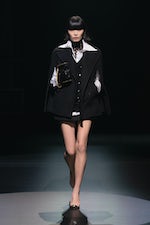