Run-D.M.C.'s 'My Adidas' and the Birth of Hip Hop Sneaker Culture

BoF investigates the impact of Run-D.M.C.’s 1986 track "My Adidas" and the beginning of modern hip hop style sensibility, sneaker culture and product endorsements.

NEW YORK, United States — Few images capture the 1980s quite as representatively as that of Run-D.M.C. crouching in front of the Eiffel Tower. Group members Joseph “Rev Run” Simmons, Darryl “D.M.C.” McDaniels and Jason “Jam Master Jay” Mizell are dressed in unison. Each wears a three-striped Adidas tracksuit emblazoned with its three-leafed motif. Gold ‘dookie rope’ chains swing from their necks and black fedoras crown their heads. On their feet are unlaced white Adidas shell toe ‘Superstars’ with the tongues pushed up, allegedly in impersonation of the ‘prison style’ worn by inmates. The photo, taken for the band’s 1987 Together Forever tour, encapsulates the paradigm shift in rap and fashion culture brought about by the band’s now iconic hit song "My Adidas", released the year before. 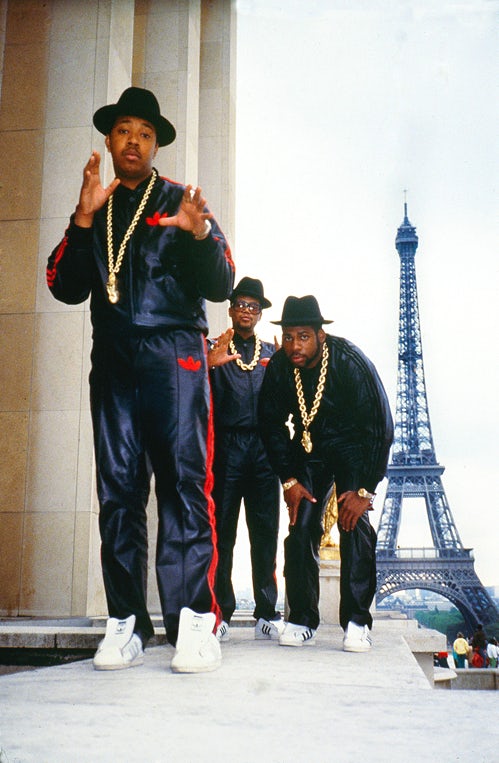 Run-D.M.C. in Paris on the Together Forever tour | Photo: Ricky Powell

To the modern observer, total-look sportswear, ostentatious sneakers and jewellery are synonymous with hip hop culture, but before Run-D.M.C. popularised the look, and later genre-defining artists The Beastie Boys and LL Cool J adopted it, hip hop looked entirely different. Unlike their immediate rap predecessors Melle Mel (of Grandmaster Flash and the Furious Five) and Afrika Bambaataa, Run-D.M.C. eschewed the leather vestiges of glam rock and camp African King attire. Instead they favoured the clothes they sported on the streets and one street in particular: Hollis Avenue in Queens, New York.

Growing up during the 1970s on Hollis Avenue, Run-D.M.C. witnessed a period of distinct change in New York. Its long-standing social mores and hierarchies faded in relevance, while the cultural and societal codes of the future were yet to be established. The simplicity and consistency of the band’s self-identifying, quasi-tribal style of dress reflected this state of flux in New York and American society. The band’s neighbourhood, culture, race and style weren’t placed behind the standard music industry veneer; they looked like who they were and, crucially, they looked like their fans. Knowingly or not, “three brothers, wearing three stripes,” created a stylistic movement that would come to galvanise the confidence of a newly emerging cultural demographic.

"['My Adidas'] was a song that was about our sneakers, but it was bigger than just talking about how many pairs of sneakers we had,” McDaniels told MTV in 2011, 25 years after the song's release. “It came from the place where people would look at the b-boys, the b-girls and go, 'Oh, those are the people that cause all the problems in here.' And, 'Those young people are nothing but troublemakers and those young people don't know nothing.' So they was [sic] judging the book by its cover, without seeing what was inside of it."

As the next two albums dropped, in 1985 and 1986, the trefoiled Run-D.M.C. came to represent black, urban youth across America. What had begun as an indicator had become a flag. “We was [sic] going through Detroit, through Boston, through Chicago, through LA, through Virginia; every city we went to on the Raising Hell Tour, we would look out the back of the tour bus and everybody had the Adidas [track] suits from head to toe,” McDaniels continued. Fittingly at this stage, Adidas itself entered the mix, creating a trifecta that would alter the music and fashion industries forever, revolutionising the relationship between performer and consumer in the process.

Angelo Anastasio, a senior Adidas employee, was attending a 1986 Madison Square Gardens performance of the Raising Hell tour when he was struck by the sight of tens of thousands of fans lifting their Adidas sneakers into the air, answering the call of those on stage. Inspired, Anastasio reportedly ran back to the Adidas New York headquarters and within days, Run-D.M.C. became the first hip hop group to receive a million-dollar endorsement deal. Success was immediate; a limited edition shell toe ‘Superstar’ sneaker was released, soon followed by the now immediately recallable cross-branded clothing range, which is still in production under the Adidas Originals label. Big budget advertisements depicting the band in the brand were soon everywhere, and sales skyrocketed. 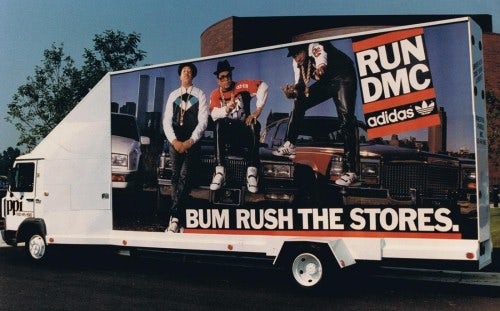 By the time of the Together Forever tour, the partnership pervaded every press call, every image and every association the band made. Its rampant success paved the way for the kind of endorsement deals that saturate the music industry today and forged Adidas’ long-running association with hip hop, which has seen the sportswear giant sign deals with Kanye West, Missy Elliott, Snoop Dogg, Ciara and Pharrell, amongst many, many more.

However, the fashion legacy of Run-D.M.C. and their shell-toed Adidas is so much more than the emergence of a new revenue driver for performers and brands alike. Hip hop fashion, streetwear, the cachet of sportswear brands and the increasingly inextricable relationship between music and fashion have all, in some way or another, been influenced and affected by the group.