IRVINE, United States — At Too Faced's headquarters, known as “the pink palace,” giant replicas of metallic lipsticks in fuchsia and magenta tubes greet visitors as soon as they walk in the door.

Hot pink walls glisten with pink glitter “Too Faced” logos. Conference rooms are decorated with plush fuchsia chairs and matching pink kisses printed on the glass walls. Even the office supplies are kept in ombré drawers that range from pale rosé to bubblegum. A life-size faux peach tree, bearing fuzzy fake fruit and “Sweet Peach” eyeshadow palettes, sticks out like a sore thumb.

Too Faced is different than the other brands in The Estée Lauder Companies’ portfolio. Situated a continent away from its parent, the brand, founded by Jerrod Blandino and Jeremy Johnson in 1998, has churned out bright-coloured, be-glittered makeup for young women (and, increasingly, men) in a way Lauder’s other brands can only dream of.

It’s why the New York-based conglomerate was willing to spend $1.45 billion to buy the brand in 2016, still its biggest acquisition to date. Now Blandino and Johnson are planning their next move at Too Faced, where they still run day-to-day operations. Next week, the brand is introducing its first skincare line, the “Hangover” collection. 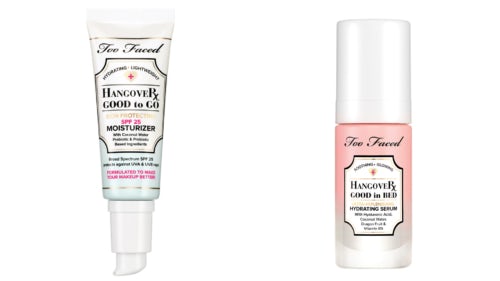 It used to be rarer for a brand to straddle both categories, but increased crossover in colour cosmetics and skin has been largely fueled by lagging makeup sales (and desire for increased market share). According to The NPD Group, prestige makeup sales in the US were down by 4 percent during the first quarter of this year, while skincare was up by 5 percent. Unfortunately, it’s not always easy to make the transition because skincare tends to be more technical and ingredient-focused. Kylie Jenner recently made the leap, and though her Kylie Skin line sold well at launch, her heavily filtered Instagram promotions – routine for colour, but not in skincare – generated a backlash.

Too Faced's sales are far from dipping, though. Blandino said the skincare line evolved from the impassioned response to the brand’s “Hangover Primer,” a primer designed for use before foundation application, that launched in 2014.

Customers said they were using the product as part of their skincare routine, which led to a “Hangover 3-in-1” setting spray that followed in 2017. The two products launching next week, a serum and a moisturiser, are the first to fall explicitly in the skincare category, with more products slated for a December release.

Blandino’s own skincare regimen hints at what’s likely to come next. He said he puts on eye cream the way some people stress eat, and applies different cleansers for day and night, plus assorted serums, mists, moisturisers. He’s test-driving “hangover” night and eye creams.

“I’m not abandoning ship. I have a very specific point of view – I’m going to improve your skin so my makeup looks better, wears longer, you need less of it, performs better,” said Blandino, dressed in black aside from a dainty rose gold and diamond rosary necklace handmade by nuns in Portugal, a birthday gift from a “friend” (Madonna). “I’ll always be colour, but it doesn’t mean I can’t be equally skincare.” 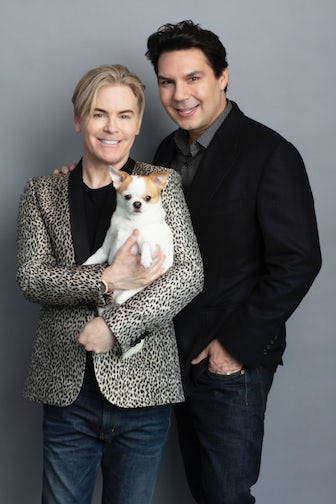 If there’s one thing Blandino knows, it’s how to complete the sale. In 1994, he worked as an Estée Lauder counter manager at Saks Fifth Avenue in Costa Mesa, Calif. His skill at selling makeup caught the attention of John Demsey, who at the time ran the company’s West Coast office. Demsey took Blandino to lunch as a reward for a “very successful” gift with purchase promotion. While still at Saks, Blandino and Johnson (who worked at the Estée Lauder counter at Bloomingdale’s) quietly launched Too Faced at Nordstrom.

Blandino and Johnson now report to Demsey, who is executive group president at The Estée Lauder Companies.

“This is the logical progression and the mashup of the blur between makeup and skin. If you look at the makeup business today, you do see … a big pickup in hybrids,” Demsey said. “There are more and more products with colour in them that have … active skincare ingredients. That’s where they see their sweet spot.”

Lauder has a lot riding on the launch.

The conglomerate’s top skincare brands, La Mer and Estée Lauder, are expensive and skew older. Clinique has a lower price point but has struggled with capturing the attention of the selfie generation. Too Faced could finally give Lauder an in with Gen Z. Once hooked, the thinking goes, those young customers would stick with their new favourite skincare brand into their adult years – or at least until they can afford La Mer.

“He’s [Blandino] not talking about anti-ageing, he’s talking about taking care of your skin and living a healthy lifestyle,” said Dana Telsey, chief executive at The Telsey Group. “When you think about the [younger] customer he’s appealing to, that’s what it’s about.”

Skincare for people in their teens and early 20s was once dominated by acne treatments. But in recent years, brands have introduced products meant to create healthy, glowing skin. A category of skincare lines that appeal to Gen Z, including Neutrogena, compete for a separate demographic than La Mer and other brands based around anti-ageing. The younger brands also tend to be cheaper; Too Faced’s moisturiser costs about one-tenth La Mer’s signature Crème de la Mer.

Too Faced reportedly did $750 million in retail sales last year, according to a person familiar with the company, and is still experiencing double-digit growth, even as the colour category as a whole lags. The brand’s six-year-old “Better Than Sex Mascara” is the bestselling prestige mascara in the US, where one is sold every 7.5 seconds, according to The NPD Group. Earlier this month, the brand launched its first new mascara since Better Than Sex, “Damn Girl.”

The challenge for Too Faced will be translating the brand’s knack for introducing must-have products for Gen Z customers from makeup to skin. Where colour schemes, clever names and packaging often move the needle for makeup, skincare customers typically focus more on active ingredients. The brand’s primer has had success over the past half a decade, which already shows an ability to cross-sell. According to Jensen, a strong colour business can benefit from tying in skincare-related items.

“Consumers are looking at that category [skin] through a much more critical lens,” said Larissa Jensen, executive director at The NPD Group. “You risk getting called out for these things and almost being made to look foolish.” 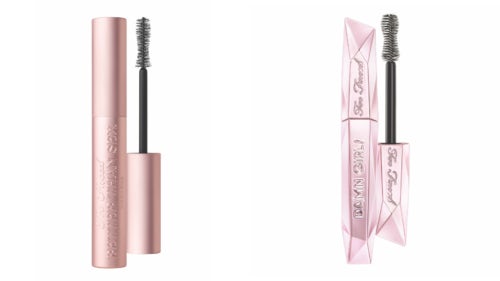 The key to convincing customers to take the leap from colour to skincare with the same brand is for the products to be sold together, Demsey said. That’s the norm in department stores; at Nordstrom, for example, Too Faced can display the new moisturiser next to its hit mascara. Specialty stores tend to group products by category rather than brand, making discovery more of a challenge.

Some category-straddling brands, including It Cosmetics, have convinced specialty retailers to merchandise their products together. Lauder is hoping Too Faced will be one of them, once its full line is out.

And there’s always the brand’s own e-commerce and brick and mortar businesses. Too Faced’s online business is thriving and a fifth freestanding store will open next month in Korea.

“A founder or a brand can start the party [online or in-store] without the support of someone else,” Demsey said.