SHANGHAI, China — Feminism and female empowerment is a complicated business in China.

This is, after all, a country that simultaneously boasts the largest number of self-made female billionaires whilst jailing feminist activists for organising relatively innocuous rallies. Examples of the latter include promoting equal access to public toilets and drawing attention to workplace discrimination and sexual harassment.

It’s also a country where women notoriously “hold up half the sky,” but where the status of women has gone backwards in recent years. According to UN Women rankings, less women are taking up paid work outside the home, and those who do work remain saddled with the bulk of (unpaid) household chores and care for both children and elders.

“Things have changed a lot for Chinese women in my generation,” says 29-year-old Emily Zhang. “In some ways better and in some ways worse, [but] overall it’s just more complicated.”

Zhang is single and lives in Shanghai, a recent returnee to China who last year launched her own wellness company. A Stanford graduate, she cut her entrepreneurial teeth in Silicon Valley’s start-up scene for several years. These are elements of her biography she plays down on local dating sites for fear of scaring off men with her ambition.

The expectations of Chinese women haven’t changed so much as expanded.

Raised in northeast China — as an only child like the vast majority of her contemporaries — Zhang says her upbringing was like that of a family’s oldest son in traditional Chinese culture: she was afforded every educational opportunity and emotional and monetary investment her parents could afford.

But as an adult woman looking down the barrel of 30, she now feels the expectation of society (though not overtly from her parents, who she says are very supportive of her choices) not only to continue to achieve greatness in her career, but also to fit the confines of a traditional Chinese woman.

The expectations of Chinese women haven’t changed so much as expanded. But so has the dialogue around feminism, and marketers are beginning to take notice. 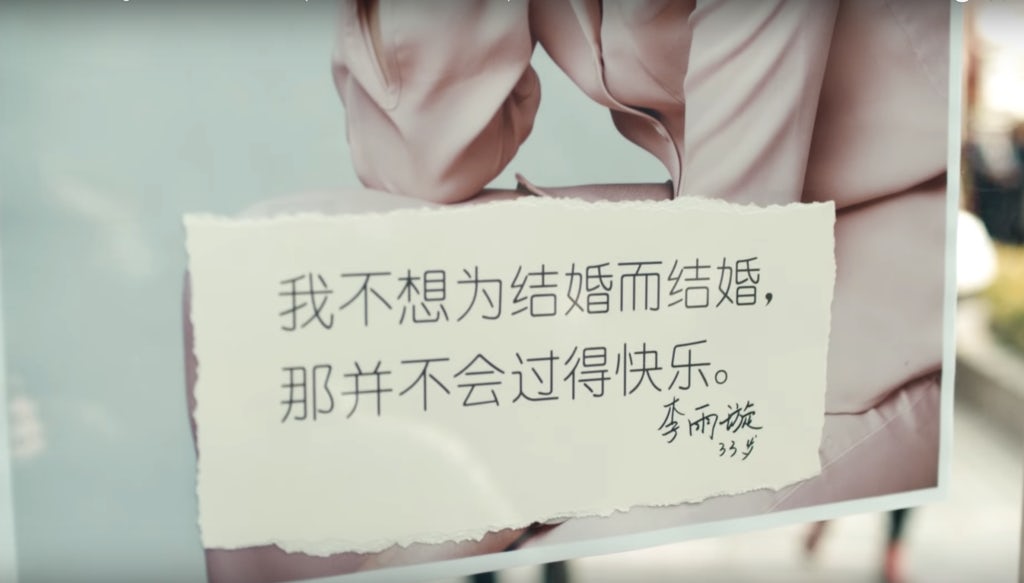 A screenshot from SK-II's first "Marriage Market" film, that reads "I won't be happy if I marry someone for the sake of getting married." | Source: SK-II

The highest profile, overtly feminist campaign benchmark in China is undoubtedly SK-II’s 2016 viral fightback against the stigma of being a “sheng nu,” or “leftover woman” (those unmarried into their late 20s or older). The five-minute video tells the stories of women deemed "incomplete" due to their lack of a spouse, and the pressure they feel from society and their parents — who are so anxious about their daughter's prospects that they frequent "marriage markets" to help them find a spouse.

Since then, the Japanese beauty brand has produced three short films on the issue of marriage pressure on Asian women for its "Change Destiny" series of campaigns. Released on February 18, the latest film entitled “Meet Me Halfway” focuses on single Chinese women that avoid travelling home for Chinese New Year, because of the stressful questions asked by often well-meaning relatives regarding boyfriends, husbands and children.

In the film, the camera hones in on the women as well as their parents, who make statements such as, "Women should be traditional — a good wife and a good mother," and "Women shouldn't work so hard. It's exhausting for a girl." It goes on to tell the story of how the daughters write letters to their parents, asking them to meet them halfway.

Within 24 hours of its release in the country, the third film garnered over 15 million views. 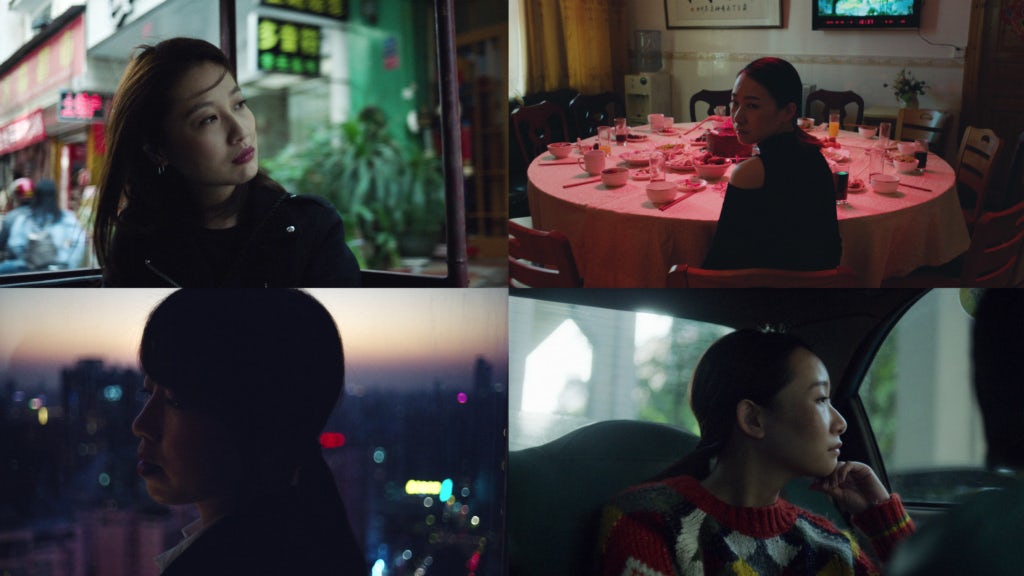 “It wasn’t our intent to pick a sensitive topic for the sake of being provocative,” says Kylene Campos, SK-II’s global brand director, when asked about the 2016 campaign. “The more people we talked to, the more we found it to be a deep-seated source of tension among working women in Asia. We realised that in order to be a human brand, we’d have to comment on a human level.”

Last year, SK-II went on to launch the Bare Skin Project, which featured its brand ambassadors sans-makeup, and encouraged women to flaunt their natural skin.

Apart from SK-II, however, nothing has matched the impact or the level of its empowered female message — though that doesn’t mean there won’t be more to come from brands looking to tap into the aspirations of a new generation of Chinese women.

“Out and about feminism that we see in the West, it’s just so new in China,” says Jerry Clode, the head of digital and social insight at the Shanghai-based agency Resonance China. “Basically, it’s taken until the second generation of the one child policy for women to have the education, the resources and the confidence to feel they can express that feminism, so it’s still at an early stage.”

In the wake of Chinese campaign faux pas by the likes of Burberry and Dolce & Gabbana, brands might be discouraged from touching upon socio-political issues in their marketing. “International brands have been trying to localise and making an absolute mess of it,” Clode continues.

But ultimately, the discussion is waiting to happen on a wider scale. “Talking about feminism or feminist activist messages [is] actually a very aspirational message … I think it’s safer than clumsy localisation because it actually fits with the reality of society,” he says.

Xiong Jing is a well-known feminist activist in China, the editor of Nuquan Zhisheng (or Feminist Voices) social media platform before it was shuttered by authorities in 2017. Her group has since splintered its content over a number of different social media accounts, to diffuse its potential as a target for censors.

Don’t do feminism for feminism’s sake.

In spite of government censorship of their message, Xiong agrees with Clode’s assessment that the awareness and acceptance of feminism among young women in China is growing and normalising, with public discussions of gender roles — as well as the professional and personal lives of millennial Chinese — routinely including a feminist perspective.

“I think feminism has become one of the strong voices of public opinion, every time something happens, people want to know what feminists think about it, there is this gendered perspective available. That’s a huge change in recent years,” she says.

This groundswell of acceptance for feminism however, hasn’t crossed over into the ways in which companies are talking to female consumers. According to Xiong, the dominant message to young Chinese women — one of the most marketed to cohorts of consumers on earth — is about “being beautiful” and “taking care of your family.”

There are still regular instances of overt sexism in Chinese advertising, with recent examples including a packaging gaffe from e-commerce giant JD.com that saw boxes emblazoned with the slogan, “Women who don’t wear lipstick are no different from men” and an Audi ad in which a mother-in-law inspects a young bride as one would a used car.

Though the prevalence of sexist advertising is a disappointing show of how little progress companies are making in promoting messages of female empowerment to Chinese women, Xiong says the increasingly heated backlash against these ads is an encouraging sign. 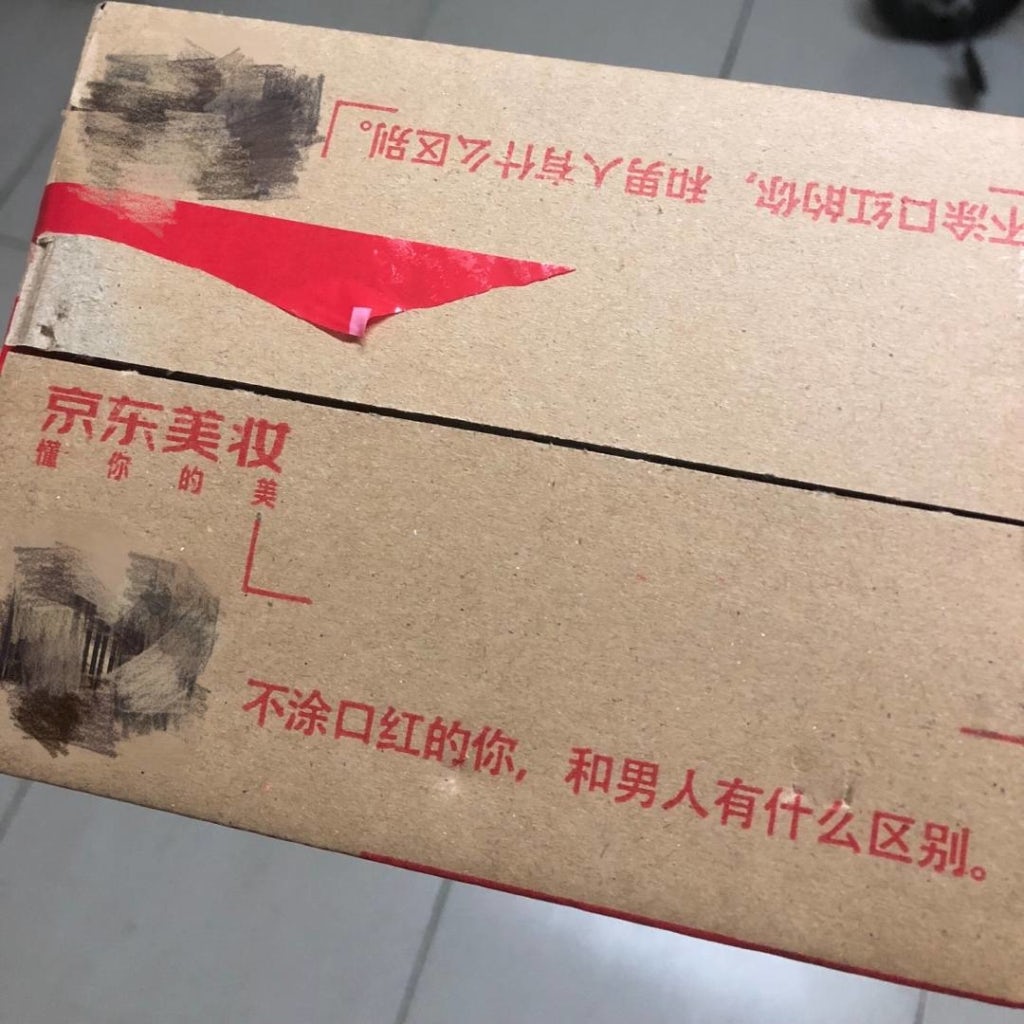 “I think the good thing is that when these things happen now, women are starting to protest, it’s becoming obvious that people don’t like this kind of ad, so this maybe is a sign of more campaigns having to consider the values of women if they want to sell to women,” she says.

“The way Chinese culture is accepting a more active female role in society is still progressing, it’s a process, [so] it might be scary for brands to step too far,” she says.

“Brands are always sensitive about having anything to do with social movements [in China] because it’s hard to predict what the government will react to … but female empowerment is really being encouraged now in the business world with the tacit approval of the government and this will encourage brands to be more courageous.”

Campos concurs that commenting on socio-political and deep-seated issues in China can indeed be risky business. “There were stakeholders telling us to tread carefully,” she says. “But our goal wasn’t to create an activist campaign or attack the establishment … We just wanted to depict the issue and tension in an honest way.”

One tangible step forward, according to Ling, is the selection of female celebrity ambassadors. Including Dou Jingtong, also known as Leah Dou, the 22-year-old lesbian pop singer now also the (tattooed) face of SK-II in China.

The recent treatment of brand darling Yang Mi has also been instructive, says Ling. The Michael Kors global ambassador is enduring a high-profile divorce and public attacks from her in-laws.

According to Ling, such familial disharmony would certainly have put Yang’s brand contracts at risk in years past, but today, her young (post-90s) fan base is actively rooting for her online. Colgate seized on the opportunity to release a new campaign with a single, unbowed Yang Mi at its centre.

The way Chinese culture is accepting a more active female role in society is still progressing, it’s a process.

“I think this ad stems from the way she has been supported by other women and the public in China,” Ling says.

“It’s coming through in celebrity choices rather than advertising copy, but I think that will be happening soon. A lot of brands we work with are under pressure to create brand value and purpose, and in China … [these factors] will come together and offer a stronger connection to messages about female empowerment.”

Even so, Campos stresses that choosing female ambassadors isn’t always enough. “The local beauty industry is still celebrity-oriented, she notes, highlighting  SK-II’s decision to feature real Chinese women in their trio of films. “We do have brand ambassadors but try not to centre all conversations around them.”

Ultimately for marketers, an impactful campaign is one that builds upon existing brand identity and storytelling. “Don’t do feminism for feminism’s sake,” warns Clode.

“Something brands can get wrong is they say, ‘OK, let’s show really strong female role models’ … What they need to do is look at the proposition of their brand, whether it be an international or domestic brand, and say, ‘What aspect of our brand is related to feminism?’ is there a female founder or inspiration to the formation of the brand?”

More so than provocation, sensationalism or virality, resonance and emotional engagement should be the goal. “It doesn't have to be activist. It’s really just a message that is supporting what is already happening.”