PARIS, France — At Christian Dior’s haute couture atelier in the 8th arrondissement on Thursday, a team of the house's famed petite mains were busily stitching away, attaching a latticed crystal bust to a gown and sewing linings into the last few coats before the launch of their latest collection — their first to debut online and one of the opening acts of Paris’ first-ever digital fashion week, which starts Monday.

Nearly four months after France went into full lockdown to curb the novel coronavirus, it was no longer shocking that visitors were coached on their mask-wearing technique and temperature-checked by a thermal camera. What was surprising was the size of the gowns in Maria Grazia Chiuri’s couture collection: they were barely a foot tall.

It seems like everyone is scaling back these days, though no-one quite so literally as Dior. Chiuri, womenswear creative director since 2016, wanted to tap into the resilient spirit of Dior’s founding after World War II. The miniature gowns revive the tradition of Paris’ 1945 Theatre de la Mode expo, when couture houses promoted their creations in a travelling show of doll-sized samples due to strict rationing of fabric. 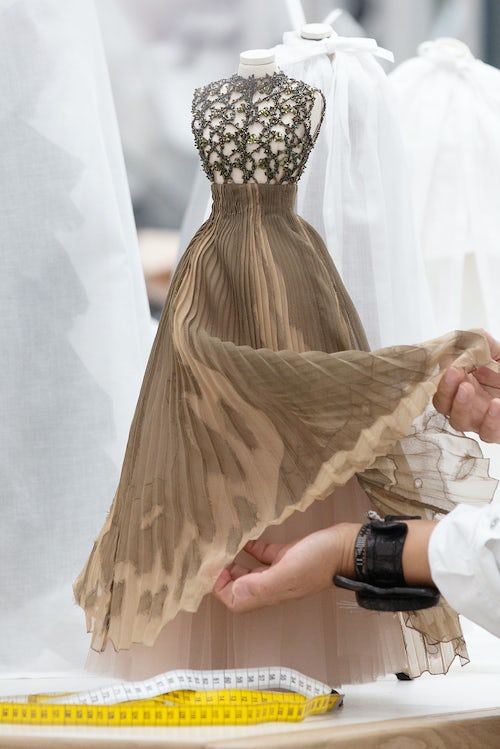 “It’s a piece of history,” Dior’s Chief Executive Pietro Beccari said about the haute couture confections rendered at an impossibly tiny scale, as he leaned into a Zoom camera the following day.

Feeling like a “captain on a boat in difficulty,” Beccari spent months staring into webcams from the ghost ship of Dior’s Avenue Montaigne headquarters, coordinating teams stuck at home around the world during the lockdown as the house navigates the fashion industry’s deepest crisis in a generation.

Before the Covid-19 outbreak, LVMH’s second biggest brand had been enjoying a surge in sales. Deft merchandising of Chiuri’s womenswear collections — including her hit book totes, saddle bags and ready-to-wear mixing ultra-feminine shapes with candid feminist slogans — combined with greater marketing investments to drive sales up by more than 20 percent last year, analysts estimate. Menswear director Kim Jones has also contributed to the momentum, bringing in a new, younger clientele with his monogrammed high-top sneakers and collaborations with the likes of Sean Stussy, Raymond Pettibon and Kaws.

Now luxury sales are expected to contract by up to 39 percent this year, according to BoF and McKinsey’s State of Fashion 2020 Coronavirus Update. While Dior has downsized its couture outing this season, the brand would hardly consider skipping it. “Dior was born as an haute couture house. We have to respect that DNA,” Beccari said.

Haute Couture Autumn/Winter 2020 is the first selection of new products Dior is showing after several months in crisis mode. Though French coronavirus restrictions are easing, the house has scuttled its usually star-studded live couture event, and will, instead, release a film about the collection commissioned from Italian director Matteo Garrone.

Like all brands, Dior has cut costs during the crisis, Beccari says. But the house is also maintaining some investments in high-visibility marketing, a move that could help sales rebound faster than competitors in an eventual recovery. The couture film will be followed up by a summer's full of rapid-fire initiatives, ranging from a sprawling museum exhibit in Shanghai to a live-streamed runway show and new stores, as Dior races to regain its pre-pandemic pace. The brand was also one of the first to confirm its intention to start staging runway shows for a live audience again as soon as September.

We decided to push forward when everyone else was stepping back, fearing for this crisis to last too long.

“We decided to push forward when everyone else was stepping back, fearing for this crisis to last too long,” Beccari said. “We are animated by a spirit of optimism going back to why Dior exists — the optimism of founding a company after the war.”

As well as optimism, Dior is animated by deep pockets. The house is much-loved by LVMH chief Bernard Arnault, Europe’s wealthiest person, and was the first brand in his luxury empire. Combined sales at Dior’s fashion and beauty divisions hit roughly €6 billion last year, according to analyst estimates (LVMH does not break out sales for individual brands), but Arnault has long held that Dior could punch even higher, perhaps even rivalling powerhouse Chanel, which generated 2019 sales of nearly $12.3 billion.

While Dior’s beauty division is managed separately from the fashion house, Beccari says the two companies have been working closely to align the brand's message, particularly across social media and e-commerce.

With many boutiques still shuttered around the world, most of Europe’s fashion industry is racing to cut costs. Even LVMH has said it is “reinforcing the selectivity of investments,” as it expects sales to rebound only gradually in the second half of the year.

The group is making some deep cuts — including thousands of layoffs at North America’s Sephora stores — but by managing to still spend at higher levels than rivals, particularly on creation and marketing, LVMH could be putting its brands in a position to steal market share when the crisis wanes and consumer demand finally picks up. 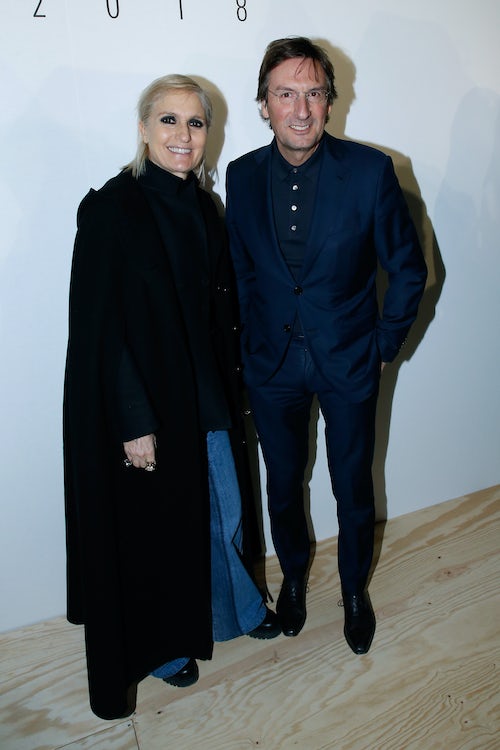 Haute couture will remain a priority as the category that exemplifies Dior’s values and anchors the high-end perception that makes its other products desirable, Beccari said, even if the couture division only makes up a small part of the company’s sales. “The main objective is to project an image,” Beccari said, as well as preserving savoir faire and creating new techniques that can later be replicated via machine.

Dior’s miniature collection was born, in part, of necessity. As work began on the collection, the brand's seamsters and seamstresses had been working from home for more than a month, with a fleet of taxis relaying orders between their apartments. The tiny dresses (which are available for full-size orders) revived a symbol of couture’s post-War resilience, but also had the practical benefit of being much easier to ferry from place to place than the voluminous gowns that had invaded the petites mains’ homes during the lockdown. With the physical show cancelled, the miniature looks will also make for an engaging presentation when shipped out to display for clients (each one comes with a custom-made trunk).

It’s strange times for the business of selling six-figure gowns, and Dior is having to adapt. Restrictions on large gatherings and international travel have forced many of the year’s most glitzy events off the calendar, so it’s unclear where anyone would wear haute couture. And with the houses’ central tradition — runway shows — also broadly cancelled due to coronavirus precautions, the brands are having to find a way to promote themselves without the buzz that comes from the roster of celebrity guests, clients and press they invite to their events.

Still, some clients are still placing high-value couture orders, industry sources and Beccari said, even if the segment has taken a dramatic hit. Bored at home, some ultra-wealthy clients seem to be planning ahead for when their social lives return, and many grandiose weddings have merely been postponed, not cancelled. The US remains a particularly challenging region, however, two of the sources said.

Haute couture houses are also having to ask themselves how to make their rarefied world — one that trades in exclusivity, decadence and tradition — relevant at a time when companies are facing unprecedented pressure to address issues ranging from economic and racial inequality to the environment.

“The crises that the world is going through in this very important moment in history have confronted us with the limits of the society in which we live, its structures and its modes of progression,” Chiuri said via email. After months confined with her family in Rome, the designer wanted to return to fashion with a “hymn to resilience” dedicated to the craftspeople working for Dior, whose expertise she says must be preserved, as well as to victims of the coronavirus crisis. “We need beauty to look to the future with optimism and willingness.”

While this summer’s couture presentation may be smaller affair than usual — just 36 looks — Dior is planning to follow it up with what Beccari called a “hurricane of activity.”

The couture division is creating brand equity they can leverage across their offer.

The brand has shipped out looks spanning its nearly 75-year-old couture archives to Shanghai, where the Long Museum West Bund will feature a third iteration of the fashion retrospective Christian Dior: Designer of Dreams. After sell-out runs in Paris and London, the Shanghai show will be more than twice as big as its last edition at the Victoria & Albert museum. The show is slated to open as soon as July 28, and will be one of China’s first major public events since the lockdown.

Like the film, the exhibition is aimed at communicating Dior's couture legacy to a wider audience, generating a halo effect that trickles down to sales of affordable items like lipsticks and perfumes. “The couture division is creating brand equity they can leverage across their offer,” explained Ortelli.

China’s recovery is a “flashlight” for the world as it seeks to reboot its economy and move on from the coronavirus crisis, Beccari said. Even as new lockdown measures were put in place to stem a fresh outbreak in Beijing, he says China has continued to recover. “In China, we see a resumption of activity that is pretty strong and earlier than we expected.”

Experts say the scale of China's luxury rebound is inflated by shoppers repatriating purchases they would have previously made abroad, however, and so should be treated with caution. The Chinese market made up more than one third of luxury sales and two-thirds of the industry’s growth in recent years, but much of their spending took place on foreign shopping excursions.

Dior is planning posh activations aimed at rebooting the European market this summer as well, including the opening of a new boutique across from the Chanel flagship on Paris’s Rue Cambon, the roll-out of a new fragrance and new handbag line, and a series of pop-up stores in the French and Italian Riviera. They’ll also live-stream a runway show from Lecce, Italy, where their cruise collection had initially been slated for May. (No guests will be allowed to attend in person.)

But as Dior bets big on regaining its momentum, isn’t Beccari concerned that the pandemic will imprint itself on consumer psychology, amongst the wealthy, resulting in more conservative spending or a hesitance to buy and wear such overt status symbols?

“From what I see right now, people are looking forward to going back to doing what they did before,” Beccari said. “That doesn’t necessarily mean no consequences, no changes. But in terms of psychology of customers, I believe people will continue to seek out luxury as a kind of personal reward.”

China’s Luxury Rebound May Not Be What It Seems