Chief executive Philippe Fortunato and artistic director Clare Waight Keller break down their plans to grow the French couture house into one of the world’s largest luxury brands.

Chief executive Philippe Fortunato and artistic director Clare Waight Keller break down their plans to grow the French couture house into one of the world’s largest luxury brands.

PARIS, France — “I don’t want to jinx it,” said Givenchy chief executive Philippe Fortunato, a few days before artistic director Clare Waight Keller’s second ready-to-wear outing for the house on Sunday. Fortunato was speaking not about her capabilities as a designer, but about his ambitious plans for the French couture house as Waight Keller’s first collection arrives in stores.

“We know that 2018 will be a very strong year of growth in the company,” he continued. “All the lights are green, let’s put it that way.”

While Fortunato is coy about how quickly he expects to see progress, he is clear about the end goal: the executive plans to grow Givenchy to the scale of Dior’s fashion business, with revenue in excess of €2 billion.

“It’s not only my mandate, but that’s my personal conviction,” he explained, adding that in his 18 years at the LVMH group — he started his career at Dior — he has always thought that “one day, Givenchy would be one of the top couture houses in France.” LVMH does not break out Givenchy’s performance, but reports estimate the brand currently generates over €400 million per year. Fortunato clearly has his work cut out for him — doubly so, as LVMH chairman and chief executive Bernard Arnault has publicly stated that he expects the brand to grow rapidly over the next two years.

“It’s a bit of a sleeper at the moment,” said John Guy, analyst at MainFirst Bank AG. “Nowadays, Givenchy is not top of mind,” added Mario Ortelli, senior research analyst of luxury goods at Sanford C. Bernstein. “More fashionable consumers are looking at Gucci, Balenciaga and Dior, and legacy consumers are more focused on Louis Vuitton and Fendi. Givenchy has to re-find its place in the market.”

At the highest level, Fortunato’s strategy is about a “return to our roots” and the values of Hubert de Givenchy, the couturier known for his elegant and feminine designs, who was the first to recognise the power of enlisting a Hollywood star as an ambassador when he met Audrey Hepburn in 1953. Henry Racamier, LVMH’s former vice chairman, oversaw the acquisition of Givenchy for a reported $45 million in 1988, the same year Bernard Arnault acquired a major stake in the group. A lot has changed since then.

After Givenchy’s namesake retired from the house in 1995, its designers including John Galliano and Alexander McQueen have more often than not ignored the founder's legacy. Under Riccardo Tisci’s creative leadership from 2005 to 2017, the company reportedly grew revenues by more than sixfold, fueled by the Italian designer’s dark, sensual and street-savvy collections, social media prowess and influential celebrity supporters. (Tisci is now heading to Burberry to join former Givenchy chief executive Marco Gobbetti.)

Once completely wholesale dependent, the house has since opened flagships outside its home base, in cities including New York and Rome. Its retail network has grown from 7 stores in 2005 to 72 today. Givenchy's beauty line has become an approximately $350 million business, according to market sources. (LVMH does not break out numbers for Parfums Givenchy.) 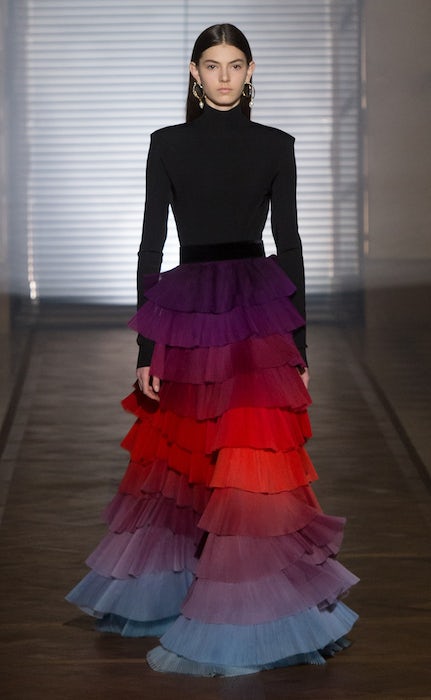 The arrival of Waight Keller, who spent the last six years at Chloé iterating on a consistently French and feminine offering, is driving a return to classic elegance for Givenchy. “She is totally on brand and in sync with the founding myth of the house,” said Fortunato, who adds that Waight Keller keenly understands how to build a modern wardrobe. “The collection is not crazy, impossible to understand, on the contrary it is very creative but at the same time, it is very accessible to a large range of clients.”

“At the end of day, what I look for when I sketch or design any kind of product is for it to be understood and worn,” explained Waight Keller. “I love looking for the balance between the extreme creative possibilities that this house and its outstanding ateliers offer and the reality of the women and men around me.”

While her first ready-to-wear collection left some critics nonplussed, the couture collection the designer presented in January made a stronger mark, attracting the highest number of appointments in Givenchy’s history, revealed Fortunato. "Waight Keller is remaking Givenchy at a rate of knots," wrote BoF's Tim Blanks about the Autumn 2018 collection.

“Part of my mission here, I believe, is to define what this new chapter is going to be,” said Waight Keller. “It is a lot of freedom, a blank page where you can write any kind of creative language and apply it to the brand’s identity.” She says her “big message” aesthetically is the synergy between the men’s and women’s collections, which each represents about half of the business.

Nevertheless, Givenchy finds itself in the challenging position of needing to bridge the aesthetic disconnect between Tisci’s legacy and Waight Keller’s vision for the future, while attracting new consumers and retaining existing ones. “I don’t believe in a system where you have to destroy to rebuild,” said Fortunato. “The brand is greater than anything else.”

His first priority is product, especially leather goods, a category in which Waight Keller is known for having a magic touch. Her first handbag for Givenchy, the GV3, which ranges in price from €790 to €1790 and arrives stores on Monday, is positioned to compete with Gucci’s Dionysus and Saint Laurent’s Sac De Jour.

“The fact that [Givenchy’s handbag price point] is quite narrow today, provides them with more opportunity to move up and scale,” said Guy. Consider Hedi Slimane’s strategy when he got to Saint Laurent: the brand focused on delivering handbags in the $2000 range that resonated with consumers before adding styles approaching $3000.

Fortunato wants to develop the handbag line cautiously and invest in silhouettes that will be appealing for years not seasons. “It is not about one single shape,” he said. “It has to scream Givenchy [and] couture quality.” Footwear is another growth opportunity, and both accessories categories featured heavily in Waight Keller’s first ad campaign.

Givenchy will also grow its retail network. This year, the house will convert its presence at Harrods in London to a shop-in-shop, open a flagship on Bond Street and unveil a new location in Orange County, California. Next up is Korea in 2019.

“I see that as an advantage,” said Fortunato of Givenchy’s relatively small retail footprint. “We have to think fully about what the client experience needs to be at Givenchy.” On Monday, Givenchy is rolling out e-commerce in five Europe markets after launching in France in September. As the platform rolls out around the world, Fortunato is focused on trying to offer a seamless consumer experience so that a shopper can book an appointment in Asia, make a purchase in Europe and have it delivered in the United States. “The logistics are quite complicated,” he said. Approximately 30 percent of Givenchy’s current sales are placed online, according to market sources. The business is split about 50-50 between wholesale and retail, but e-commerce is expected to change that. 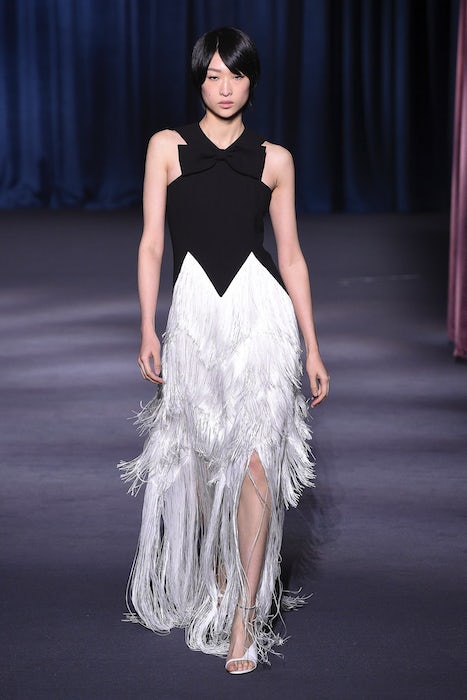 “They are under-indexed and under-penetrated in digital and they’ve got a big opportunity with regards to their store network,” explained Guy. Parallels can be drawn to Céline’s approach under Marco Gobbetti when he first arrived at the brand. The focus was on the product offering over opening stores, and margins quickly grew from negative 5 percent to about 20 percent, according to market sources. But without a big enough store network, growth eventually plateaued. “Givenchy has still opportunities to develop its store network, which is smaller than competitors, and to improve its digital platform,” said Ortelli.

Fortunato expects the e-commerce platform to grow into one of Givenchy's top five sales channels in the next five years. Driving online traffic and grabbing the attention of millennials is increasingly challenging in today’s market, however, and brands have turned to collaborations and more frequent product releases to create new content to earn a presence in the newsfeeds of young consumers.

“We are very conscious that we have a very large customer base that are millennials; we probably [have] one of the youngest clientele bases of a luxury or couture house,” said Fortunato. The house is planning monthly product drops and online-only capsules.
Fortunato wants to “make sure that [we] bring enough newness innovation and product to the stores without diluting the brand equity and the brand message.”

It’s unclear if that will be enough of a strategy to reach new audiences. In 2017, Givenchy ranked 14 in earned media value (EMV) for luxury brands, according to Tribe Dynamics, generating a total of $167 million EMV. (At the top of the list, Gucci garnered $777 million EMV in the same period). Though it's worth considering that 2017 was a year of transition for Givenchy. Social activity peaked around Tisci’s announced departure and last show.

Givenchy also has a relatively small influencer community of 8,500 social media “ambassadors” (which includes influencers, brands, publishers and retailers); the average top ten luxury brand has a network of 12,100 ambassadors. A spokesperson for the Givenchy said the number reflected a deliberate, more targeted strategy. And if Waight Keller’s #ChloeGirls initiative at Chloe is any indication, she knows how to tap into a network of influencers. What's more, Givenchy’s “Wanted”-style flyers posted last summer, starring a black cat and offering invites to the spring 2018 runway show, revealed a sense of humour that is key to building communities in a digital age.

Is this enough to propel Givenchy into the billion-dollar-plus club?

“As long as Louis Vuitton continues to generate very strong cash flow that provides a lot of support for the smaller brands, they can effectively invest and position themselves accordingly to grow,” said Guy, referring to the cash cow of the LVMH group.

Fortunato, therefore, is freer to work towards far-off goals. “I never wake up in the morning and think about how fast I should grow the business,” he said. “I’m doing it for the long term.”