At Five Years, New York's Fivestory Builds Up and Out

Two new floors will open in mid-August and include dedicated spaces for beauty and wellness, marking a new chapter for Claire Distenfeld's independent specialty multi-brand boutique.

NEW YORK, United States — When Claire Distenfeld Olshan opened the independent Upper East side luxury boutique Fivestory at the age of 26 with her father, retailer Fred Distenfeld, a distinctive and eclectic fashion edit was her focus — and it quickly earned her a reputation as one of the city’s most prominent specialty high-end retailers.

Five years later, Distenfeld Olshan is entering a new chapter in her now-profitable business that she says is steadily growing each year, a young player in a thriving era for independent specialty multi-brand retailers in the United States. “The most important thing that I can do right now is not about the product that I sell,” she says. “It’s about my customer and how to make her happy and how to differentiate myself as a store from everyone else.”

In order to give herself the space to do just that, Distenfeld Olshan signed the lease on the top two floors of the boutique’s townhouse last summer. The new floors will open in mid-August in conjunction with an organisational redesign: the third floor will feature a room devoted to special occasion dressing and a shoe section, replacing the black-and-white shoe garden. (“People don’t want to buy shoes on a marble floor,” she explains.) 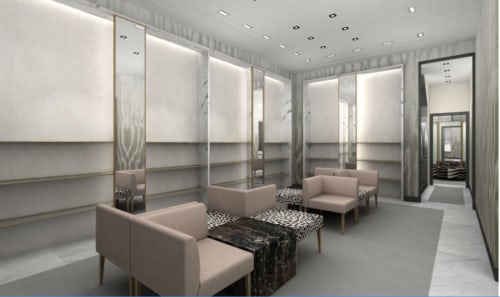 A rendering of a new floor at Fivestory | Source: Courtesy

The fourth floor will be dedicated to beauty, wellness and a rotating schedule of pop-up installations. “If someone is going to come to your store, you’ve got to do a lot more than sell them a dress, you’ve got to teach them, you’ve got to show them how to feel, give them a whole package,” she says, describing herself as a wellness obsessive. The fourth floor will also be a hub for a series of events Distenfeld Olshan has been hosting for clients over the last year at their homes or other venues (Alchemist Kitchen and MNDFL meditation studio, for example) to foster a sense of community. “It’s the old form of social media,” she says.

The events are just one of Distenfeld Olshan’s new strategies to energise the boutique, which also include trunk shows in different cities such as San Francisco. “Because Fivestory is so young, it’s able to pivot a lot easier and it’s able to evolve quicker than, lets say, a department store whose roots are really deep in the ground,” she says. “It’s not that I know things that they don’t know.”

Much like department stores, however, Distenfeld Olshan has to contend with the increased availability of designer fashion online. “When a designer says to me, nobody bought this, that’s music to my ears,” she says, adding that if a designer she works with picks up several new accounts, she cuts back on her own order. “That’s why you push for exclusives, even if it’s your own colour. It is important but it is getting difficult.” Sales are increasing, she says, because she and her team of buyers are more focused than before. “We will only buy what we feel in our guts are going to be home runs. I want no fillers, no fluff.”

To expand her exclusive product offering, Distenfeld Olshan is also starting to collaborate with artisans she has discovered while travelling on limited-edition, private label capsule collections that never go on sale. A Moroccan caftan, of which she has sold about 225 pieces, was a first test. Fivestory berets, designed with a French company, are coming next.

“I see this being a very organic private label that has no rules,” she says. “Everyone is dressed the same. I think that expensive now means this otherworldliness, this well-travelled [element].” These pieces represent 3 percent of her business now, but she sees it expanding to anywhere from 30 to 50 percent. (She declined to share revenue numbers for Fivestory.)

Distenfeld Olshan’s investment in the physical store, not only through the floor expansion but also in seasoned sales people, has been a trade-off for her e-commerce store, which launched last year. “I’m not going to do a bunch of things that I wanted to do with the website, which everyone though was crazy,” she says. Online currently represents 24 percent of sales.

“Every dollar we make, we put back into the company, especially from the website,” she says. “In this day and age being a physical store is a weighty thing.” For Distenfeld Olshan, that weight is freeing. “We are in a really weird time. I can’t wait for what’s going to happen next.”