Kering aims to turn the Milanese purveyor of colourful high-end baubles into one of the 10 biggest jewellery brands in the world. Will it work?

Kering aims to turn the Milanese purveyor of colourful high-end baubles into one of the 10 biggest jewellery brands in the world. Will it work?

Inside the Pomellato atelier | Source: Courtesy
Luxury
Share
3 Comments
By Angelo Flaccavento May 17, 2016 19:14

MILAN, Italy — Fuelled by the Expo 2015 and a burgeoning new generation of designers, Italy is having a creative Renaissance of sorts, with Milan as its epicentre. "Milano is hip again, and Pomellato should naturally be part of the movement,” says Sabina Belli, chief executive officer of the Kering-owned jewellery brand.

Conceived in 1967, at a moment when the women’s rights movement was taking off and ready-to-wear and a wave of anti-fashion sentiment were usurping haute couture, Pomellato is decidedly young, in both age and outlook, for a fine jewellery house. Its signature of colourful semi-precious stones or “alternatively precious,” in the lingo of the company, cut in large unusual shapes, such as squares — an unconventional move in the fine jewellery market, where rubies, diamonds and emeralds are integral to the output of most houses — has made Pomellato unique.

It is also, Kering hopes, the key to making Pomellato’s Milanese values a force in the competitive global jewellery market. In 2013, Kering (then PPR) took an majority stake in the Pomellato Group, which comprises the Pomellato brand and Dodo, a more accessible Italian jewellery line, with the explicit aim to “step up the pace of its growth and expand its geographic footprint,” François-Henri Pinault, chief executive officer and chairman of Kering, said in a statement at the time of the acquisition. 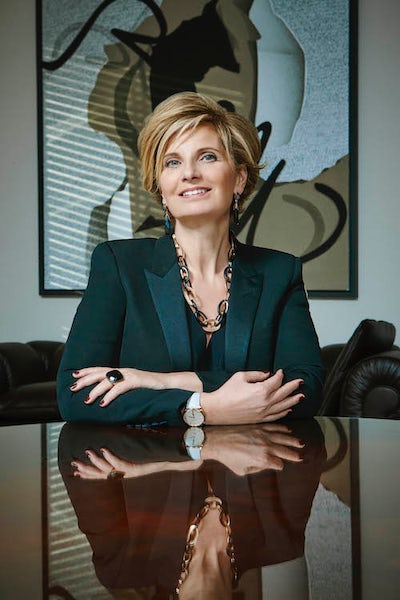 In the three years since, Pomellato’s store count has grown from 45 to 62 (40 directly-operated stores — including a new boutique on Milan’s fashionable Via Montenapoleone, designed by up and coming design duo Emiliano Salci and Britt Moran of Dimore Studio, which opened last weekend, and 22 franchises), as well as over 500 points of sale. In 2012, Pomellato generated revenues of €146 million. The company declined to reveal current financial metrics, but market sources estimate the company drove sales of between €200 million and €220 million in 2015.

Sabina Belli joined in December last year. Her goal: to double the company’s revenues and position Pomellato among the 10 most successful jewellery brands in the world. “Repositioning the house is my business mission,” says Belli, who cut her teeth at L'Oreal, LVMH and Bulgari. “Having lived abroad for a long time, I can appreciate the uniqueness of Italian craft: a winning asset, which Italians at times overlook.”

That uniqueness can be seen at Pomellato’s headquarters, a zen-like enclave complete with ponds and bamboo trees, hidden behind a nondescript door in the outskirts of Milan, which houses not only a showroom and offices, but also the in-house atelier responsible for most of Pomellato’s production. "Very few houses can pride themselves of carrying most of their production in a dedicated internal atelier,” explains Belli. Vincenzo Castaldo, the brand’s long-standing creative director, adds, "Most of our artisans have been with us for decades, and in some cases fathers have passed the baton to sons.”

On the floor below, a wonderland-cum-laboratory hides a reservoir of materials amassed over the years, from granato to quartz, from tourmaline to topaz, each stone cut manually and singularly evaluated. "We pride ourselves to be the only fine jewellery maison that has stocked raw gems from the start. We cut, polish, mount and ultimately use gems in ways that are just our own,” says Belli.

This year, Belli will launch new product lines and beef up Pomellato’s existing collections — already, in the last few years, the brand has added extensions featuring precious stones to its most recognisable lines, such as the Nudo with Diamonds collection. Outside of jewellery, the first Pomellato eyewear collection launched at the end of the year created in-house by Kering Eyewear (the brand also has a line of fragrances). The retail roll-out will also continue in 2016, with store openings focussed on Europe, the US and Japan.

“I think Pomellato is developing well in the accessible luxury space, where they have been able to establish a number of successful collections,” says Luca Solca, head of luxury goods at BNP Exane Paribas. “This is a company with a strong culture and strong DNA, which has been able to piggyback on the global distribution network offered by Kering.” 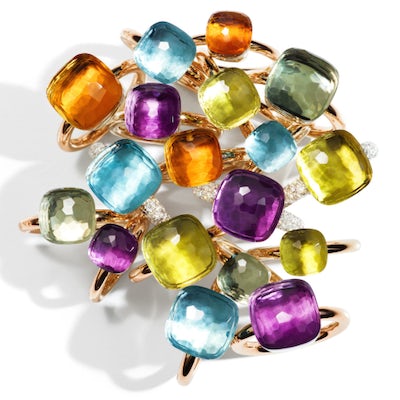 Mario Ortelli, a senior luxury goods analyst at Sanford C. Berstein, adds that the brand has heritage, a recognisable product, and an engaged consumer — all key assets in the branded jewellery market. Pomellato will benefit from the experience Kering has gained in branded jewellery with Parisian jewellery house Boucheron, which was acquired by Gucci Group in 2000, says Ortelli. (Kering's jewellery portfolio comprises the Dodo and Pomellato brands, along with Boucheron and Chinese fine jewellery brand Qeelin.) However, “The real challenge for the management is global expansion,” says Ortelli. “[Pomellato] has a European focus and is not yet a global brand. It takes money, time to successfully develop a brand globally.”

Another challenge is positioning. "The unconventional ethos of Pomellato has been defined, right from the beginning, by choosing to use semi-precious stones,” explains Stefano Cortecci, the charismatic scientist who heads the house’s gems sourcing operations. Over the years, scarcity of supply has steadily turned semi-precious stones into precious, sometimes super-precious ones. Still, "Selling a beautifully coloured stone is actually tougher than selling a diamond, which is an evident investment,” says Belli. “Customers need to be educated to appreciate."

This, along with the “fashion-forward language” — in the words of Vincenzo Castaldo — of the company’s jewellery, and its pricing at the affordable end of the fine jewellery market, has generated what the brand sees as a misconception of Pomellato as a very high-end form of bijou jewellery, rather than fine jewellery proper. “They want to elevate the brand and then you enter the market in the position that you like,” says Ortelli. “They have to decide if the current positioning is something that they want to bring globally, or when they enter another market to aspire to another position.”

Pomellato’s range encompasses silver rings for under $300, signature Nudo rings, each with a large semi-precious stone and some with additional diamonds, for between $1,700 and $5,800, and a diamond-encrusted, thick rose gold chain necklace for $174,800. “Contrary to fashion, ours are not easily disposable objects, but precious artefacts made to last. Our jewels are off-kilter, in every respect,” says Castaldo.

The market for branded jewellery grew by 8 percent last year and is not overcrowded, according to Ortelli. Pomellato remains underexposed, he says, which should help it to grow fast. In 2015, Pomellato recorded “robust growth,” which, Ortelli says, may have been double-digit.

"A Pomellato piece is as easy to recognise as it is difficult to copy,” says Belli. “We create everyday jewels women buy by and for themselves. We do things our own way: a Milanese way that can speak to the sensibilities of women worldwide."