Politics were top of mind at the fashion industry’s annual ceremony on Monday night, where a diverse set of individuals, from Raf Simons to Gloria Steinem, were honoured.

Politics were top of mind at the fashion industry’s annual ceremony on Monday night, where a diverse set of individuals, from Raf Simons to Gloria Steinem, were honoured.

NEW YORK, United States — “How many of you are immigrants?” enquired Diane von Furstenberg on Monday evening at the 2017 CFDA Fashion Awards, commanding the Hammerstein Ballroom stage. It was a rhetorical question, but the crowd, made up predominantly of fashion industry insiders, was indeed filled with transplants from other areas of the world who have chosen to live and work here in an era in which the government may not be so supportive of their patronage.

After all, this year’s awards were doled out just hours after President Trump called for his controversial travel ban to be reinstated. Which means that, by even mentioning immigration in her welcome speech, the CFDA chairwoman set the tone for an evening that celebrated design talent as much as it did the spirit of activism — honouring Planned Parenthood president Cecile Richards and feminist icon Gloria Steinem alongside designer Rick Owens (who received the Lifetime Achievement Award) and Demna Gvasalia (who took home the International Award for his work at Vetements and Balenciaga).

Hosted by comedian Seth Meyers, the evening’s award recipients included Raf Simons — who won both Womenswear and Menswear Designer of the Year for his work at Calvin Klein — Coach creative director Stuart Vevers, recognised as Accessories Designer of the Year, and Monse’s Fernando Garcia and Laura Kim, who took home the Swarovski Award for Emerging Talent. Honourees included Steinmen, Richards and activist and artist Janelle Monáe — who received the Board of Directors’ Tribute for their work on the Women’s March — Kenneth Cole, who received the Swarovski Award for Positive Change, makeup artist Pat McGrath — given the Founder's Award in honor of Eleanor Lambert — and the late Franca Sozzani, who Anna Wintour posthumously presented with the Fashion Icon Award, her future son-in-law — Sozzani’s own son, Francesco Carrozzini, who is engaged to Wintour’s daughter — accepting the token on his mother’s behalf. 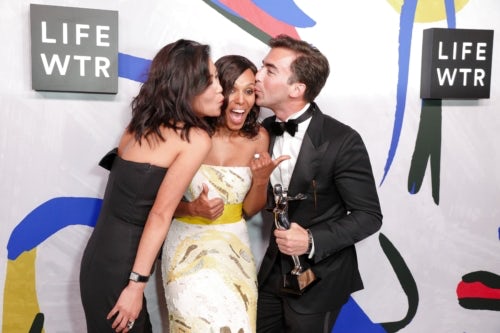 “The fashion industry has long celebrated bodily autonomy and bodily expression, and the right of every person to live their life on their own terms,” Richards said in her acceptance speech. The Planned Parenthood President also spoke with BoF before the ceremony about the significance of the CFDA’s support of her organisation. “What’s really important is women standing up for women,” she said. “To have women who are known internationally stand up for everyday women in America — it’s incomparable, the difference it makes.”

Cole, one of the first designers to take a stand in the fight against AIDS, received the first-ever Swarovski Award for Positive Change, which was established this year to recognise an individual who has made a positive impact on American communities, improving the welfare of others.

But it was the Board of Directors’ Tribute, awarded to Richards, Steinem and Monáe at the close of the evening, that carried the most weight. The fashion industry is driven by women, and the CFDA’s decision to honour those trying to preserve and defend the rights of women felt compelling and authentic.

“This is a time of hope, but it is also a time of danger,” Steinem said. “Now there is more activism than I have ever seen in my lifetime.”

“In these moments of turmoil, we must choose freedom over fear,” added Monáe.

While the triumvirate of Monáe, Steinem and Richards managed to stir emotion in the audience, there were few other calls to action during the evening’s proceedings. Simons, who grew emotional at the end of his first speech, encouraged the students sitting in the balcony, as well as his fellow designers, to use their talent for good. “I think if we, as creators, can be an inspiration for how the world should look,” he said. “I think it’s something that we should take as a very important task in our existence.”

Otherwise, the acceptance speeches were relatively free of politics. And yet, designers have never been more outspoken about the causes that are important to them than they have been since November’s US presidential election.

Right now is a moment when a lot of people, whatever they believe, are putting their beliefs ahead of their business interests.

“I think a lot of designers are very cognizant of the fact that they make clothes, they don’t make policy,” said Glamour editor-in-chief Cindi Leive.” A lot of people have a lot of very legitimate political feelings: anger, rage, activism, engagement… But we are aware that the audience we thought we knew may be more varied politically in their beliefs than we knew, and no one wants to sound like they are transmitting from inside a New York City bubble. But I do think that right now is a moment when a lot of people, whatever they believe, are putting their beliefs ahead of their business interests.”

When it came to the night’s four previously unannounced winners, the CFDA voters made a statement by recognising designers — all favoured heavily to win — that hail from outside the United States. 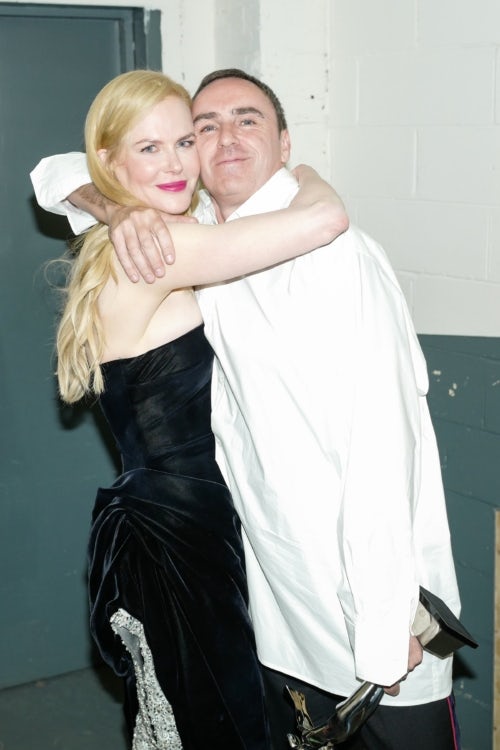 “It feels like a big welcome,” said Simons in his first acceptance speech. The designer swept both the menswear and womenswear categories, presented by Armie Hammer and Nicole Kidman respectively, for his work at Calvin Klein. He has only shown one collection for the house— but given the gravitas of his appointment and the critical praise for his Autumn 2017 collection, his double sweep came as anything but a shock.

Vevers’ turnaround of Coach — which he has been chiseling away at since 2013 — was also due to be recognised. So too were Fernando Garcia and Laura Kim, co-creative directors of Oscar de la Renta and co-founders of Monse, favourites to win the Swarovski Award. Their Cinderella-like ascendency to the helm of Oscar de la Renta, combined with the impressive progression of their own label, has rendered them the team to watch.

“I only know what Oscar [de la Renta] taught me and he was an immigrant himself,” Garcia told BoF before the ceremony. “We are able to bring something more diverse into the fabric of the culture of this country…. I’m hopeful that given everything that’s coming up and all the issues that are arising, the current government will pay attention to the importance of immigrants.”

The evening’s winners were not the only ones wrestling with the responsibility of fashion’s influential platform. “I think we are all going to be more vocal,” said designer Jason Wu, citing climate change as a key concern for him. “This is really good time to express your opinions, not just in politics but about everything — there is a lot going on.”

“It feels like everyone is really engaged,” said designer Ryan Roche, wearing an elegant Planned Parenthood pin in recognition of an organisation that she herself has utilised. “I’ve always stood behind having a sustainable brand...but we are all feeling the weight of it and more than ever. We have an opportunity to put the right foot forward and have meaningful conversations with people who might not share the same opinions that we do.”

I think it’s time for the industry to be creative and resilient for a changing world.

“I think it’s time for the industry to be creative and resilient for a changing world,” said designer Zac Posen, considering both the changing retail market and changing cultural and political currents. “We are dreamers and creators and we live in a world where we are able to communicate in a whole different way, which is a real opportunity that I hope designers use. It’s a huge privilege and responsibility and I take it really seriously — but to each his own.”

IMG Models president Ivan Bart also called out the industry’s responsibility to audiences and consumers. “We have to show inclusion and I don’t think that is polarising,” he said. “I think that’s something that’s uniting.”

One woman who certainly embraced fashion’s influential power was the late Sozzani, known for her controversial, magnificent Italian Vogue covers and editorials. “She was fearless… She was not just ahead of our time, she was ahead of our courage in so many ways,” said Wintour in an emotional speech. “Tonight we keep Franca Sozzani in our minds and our hearts.”

“This is a family affair,” von Furstenberg told BoF before the awards ceremony. The sentiment encapsulated the feeling in the room: no matter how glitzy the venue, how A-list the guest list or how challenged the industry. “Everything is changing but talent is talent,” she added. “Talent is the heart and engine of this industry, what it needs to survive.

What Trump’s Climate Reversal Means for the Fashion Industry