More than a fashion trend, Vans has maintained double-digit growth for 19 consecutive quarters. BoF speaks to Kevin Bailey, president of the action sports division of VF Corporation, which owns Vans, to understand the key components of the company’s strategy.

LOS ANGELES, United States — “Vans was a brand that was run very emotionally,” said Kevin Bailey, president of the action sports division of VF Corporation, which owns Vans, a company with almost 50 years of heritage, as well as associations with Z-Boys Tony Alva, Jay Adams and Stacy Peralta, who created modern skateboarding in the early 1970s. “I think emotion is capable of sustaining a brand for a period of time,” continued Bailey, who previously spent time at Nike, American Eagle and Lucky Brand. “But with global growth ahead of us, if we want to reach beyond the confines of being a fairly regionally-driven brand, a Southern California brand, we really needed to understand our consumer better. Instead of being purely emotional and right-brain-driven, we had to add the left brain and get smart about it.”

Getting smart about it has led to impressive results. From 2008 to 2013, Vans grew revenues from $750 million to $1.7 billion. The second quarter of 2014 marked the company’s 19th consecutive quarter of double-digit growth. And the brand says it’s on track to reach its target of $2.9 billion in revenue by 2017. But Bailey — who returned to Vans in 2009, after a two-year absence — is already thinking beyond 2017.

In 2004, Vans was acquired by VF Corporation, which owns Wrangler, The North Face, Timberland, Lee, Eastpak and others. The acquisition “took the heat off the company,” according to Bailey. Importantly, it also funded an 18-month survey of 26,000 consumers in 12 countries. “As we were staring to bump up against some larger brands entering our space — the traditional athletic brands in particular, who spend a lot of time and money on consumer insight and strategy development — we realised we really needed to upgrade the way we thought about the business,” explained Bailey. “We started with a qualitative study to understand consumer perceptions and consumer needs, then jumped into a quantitative study to understand their purchasing behaviour and their activity behaviour, within our space, to make sure we fully understood our consumers on a global scale.”

Following the survey, Vans defined a new target customer — “Expressive Creators” — and evolved its brand strategy. “When I was at the brand previously, we would say our pillars were art, music and street culture and they rested on a foundation that was action sports. When I returned to the brand [after Lucky Brand] I said I would like to turn this a little and think about art, music and action sports sitting on street culture, which is interchangeable with street fashion,” said Bailey. “I got some pushback inside the brand [from those who said] that I was changing the DNA and I said, ‘I don’t really think so, I am just asking you to turn it on its side.’ We have become iconic as a culture brand and, previously, I think we were trying to prevent this from being true; brands can be scared of getting big. But I believe we can open up the valve of who we are within our greater universe, without abandoning our heritage. When I was at Nike I learned not to be afraid of big goals. Not to be afraid of what the potential of a brand might be. Nike is very good at remaining aspirational while growing commercially by understanding the importance of keeping the brand sacred. Nike stands for athletic performance; we stand for creative expression.”

In 2012, Céline designer Phoebe Philo reignited high fashion’s fascination with Vans’ iconic slip-on when she began wearing the original shoes and created a Céline version made with python and ponyskin. Since then, luxury brands such as Saint Laurent and Givenchy have released slip-on footwear in the same mould. “The style started as the ultimate representation of West Coast skate and surf culture, then morphed into a mainstream casual sneaker option. But like everything else in fashion, its popularity has been cyclical. Most recently, I would credit its return to the forefront of fashion to when Céline did its take on the iconic silhouette — stacked sole and luxury treatment — seasons ago,” explained Eugene Tong, style director of Details.

But while the attention has rocketed Vans into the consciousness (and wardrobes) of industry insiders, the company has been very careful to resist the urge to react to fashion’s ebb and flow. “We all know there is a slip-on that has come into trend thanks to the runway and everyone is doing it at the high end and I would envisage that by next year Spring/Summer it will be more mass driven,” said Bailey. “But Vans is not going to overly saturate that; we are going to simply state that we are the original — that we are the iconic item and let consumers choose. We want to understand trends, but not manipulate them to the point where we build a bubble and create a fad.”

“We say no to things more often than we say yes — that includes distribution offers, that includes collaborations. I would even call out price elasticity,” continued Bailey. “We have done some collaborations, like Kenzo, that we know we could put out there at a much higher suggested retail price. But it’s very important to us that pricing stays reasonable. At the end of the day, it’s a canvas, vulcanised shoe; it is important that we don’t do anything that is not authentic to the Vans brand, which was always about making quality, affordable shoes.” 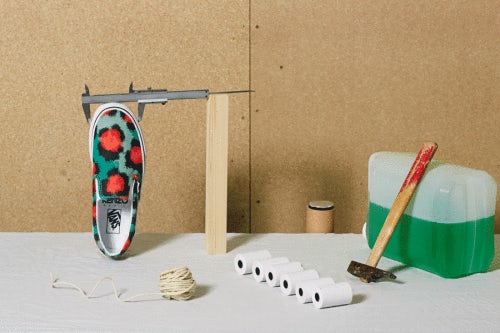 In order to better tap global growth, Vans has empowered regional managers to develop their own approaches. “This trajectory that we have had in the last 19 quarters has been because of the team’s recognition of the potential; asking how we achieve that and really freeing up the general managers to attack their own landscapes,” said Bailey. “The only thing [headquarters] really gets involved with is making sure that design remains consistent and the strategies we embrace fit within the brand.” Importantly, the company has also been “levelling the playing field” between the four regions in which it operates: Asia, Europe, North America and South America.

A focus on digital has also been critical to the company’s success. “Our target age group moves at digital speed. We believe the digital interactive space is absolutely critical and we have spent a lot of time building assets there, especially unique content through our 'Off The Wall' digital TV station. Our growth in social media is from a genuine two-way conversation. If people comment, they get a reply from us directly on a global scale. And we recently rolled out a new digital site to merge content and commerce and tell our brand story, as well as allow commerce to occur in a more seamless way. This is a global platform to which local regional marketing teams can apply regionalised stories.”

Thus far, the approach has been working and there is significant room for future growth. The global footwear market is set to reach $211.5 billion in 2018 and recontextualising Vans beyond action sports has positioned the company to tap a much larger percentage of this pie. “We know that we are still are small relative to the potential of the sector. If we continue to be able to transcend [action sports] and really consider what the broader opportunities are, the number could be massive.”

“We are still under-distributed — even in the US — and just taking that into consideration, we don’t see an end to our growth. All four regions have broad goals and all of them are targeting greater than good double-digit growth. We do believe this brand has a very broad and long runway ahead of us if we continue to activate it. Vans is this beautiful little gem with all these facets to it. Particularly as we expand globally, we have to be able to turn the right side of the gem to face the right consumer.”