SAN FRANCISCO, United States — Everlane, the San Francisco-headquartered online clothing retailer, has appointed former Gap creative director Rebekka Bay its head of product and design, effective August 4. Bay and her team will be based in New York. Everlane employees were notified Friday morning of the appointment. Petra Langerova, Everlane’s current head of design, will remain with the company as an advisor.

Bay, who is Danish, made a name for herself as creative director of minimalist high street brand Cos, which she conceptualised and developed for its owner, fast fashion giant H&M. Her appointment at Gap in 2012 was seen as a transformative step for the retailer, which has struggled to connect with customers since the early 2000s. But after reported clashes with its merchandising and executive teams, Bay left the company in January 2015.

Preysman and Bay were introduced earlier this year by mutual friends. “When Rebekka and I first met, there was an instant connection,” said Michael Preysman, founder and chief executive of Everlane, of his decision to hire Bay. “We’re very aligned on the way we view where the world is going. I think she’s going to bring a significant amount of strategy and foresight and planning, thinking about Everlane not only as a fashion brand, but as a lifestyle brand.”

“I’ve always been a great admirer of Michael’s work and Everlane,” added Bay. “When we first met, it was less about working together and more about beliefs and conceptual ideas and abstract thoughts. Then, those early conversations started to become a little bit more solid. My mission is to [communicate] the Everlane vision so that you’re never in doubt when you’re touching or wearing an Everlane product.” 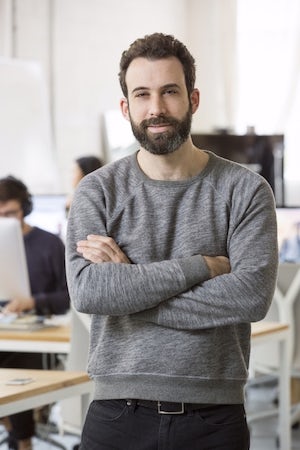 Preysman, who previously worked in private equity, launched Everlane in November 2011 as a direct-to-consumer, online-only brand. Everlane’s offers affordable basics by cutting out the middleman, eliminating the costs of operating physical stores and avoiding the mark-ups associated with wholesale. Everlane’s website displays what each of its products would likely cost at “traditional” retail, along with its price at Everlane. For example, a pair of $50 shorts would be $115, while a $365 leather bag would be $1,300, according to the site.

Indeed, transparency is at the very core of the brand. “People want to know what they are buying and how the factory workers are treated,” said Preysman, who spends much of his year visiting individual factories and expresses surprise at “how not often [apparel] executives visit factories.” To build trust with the consumer, Everlane posts photos and videos of its factories across the globe, from Hangzhou, China, where the company manufactures silk shirts, to Vicenza, Italy, where it makes leather bags. In line with this sense of social responsibility, in 2012, Preysman shut down Everlane.com on Black Friday to protest conspicuous consumption, encouraging its customers to “Buy Less, Buy Better.”

Everlane products are introduced one by one — instead of in seasons — and often sell out. “It’s such an opportunity for me not to think about seasons and collections, but categories instead,” explained Bay. “The challenge is figuring out how to do that while continuing to be relevant, desirable and create urgency.” As for what she envisions will come next? “I see the assortment almost like a periodic system,” she added. “There needs to be an organic expansion plan.”

In Bay, Preysman sees someone who can design winning product at scale. “Creating something that is beautiful, functional and accessible can be done once or twice with a small team. But we need to do that now with hundreds of styles and we need to develop innovative products that change the consumer mindset,” he said. “That's much harder at scale. Rebekka has the ability to map out a solid strategy while also executing with a nimble team on the ground.”

But with scale, comes challenges. For Everlane, a key hurdle is fit. “At the end of the day, fit is everything. As we’ve gotten bigger, it’s gotten a lot more complicated. This is an area where we have a ton of improvement to make,” said Preysman. “Technically, there are two ways to solve it. One way is to make fits that are more democratic; the other is to help people understand what will fit them.”

Bay’s designs will begin trickling onto Everlane.com in the next six months. However, according to Bay, “It will probably take us 12 to 18 months to define the Everlane signature, from the type of hand, the trim, the finishing, the proportions, the silhouette, whether to work with colour or not to work with colour.”

In 2013, Everlane generated $12 million in sales. While Preysman declined to disclose revenue for 2014, he said that sales had doubled in the past year and that the company “teeters” on the edge of profitability. According to Preysman, there are no plans for Everlane to launch physical stores or seek more external funding, beyond the $9 million the company has already raised.

The decision to bring on Bay comes at a point when scaling the company is front of mind for Preysman. “We’ve always had values, but we didn’t always have a strategy for how to build those values into a brand,” he said. “We’ve never had the product strategy that we’ve wanted. We’re ready at this point.” He added, “Our dream is to create a brand that's synonymous with great quality, beautiful design and an ethical way of treating customers and factory workers. If we do that right, the reaction from people should be, ‘Why wouldn't I shop at Everlane?’”

For Bay, the current scale of the company — unlike at Gap or Cos, Everlane does not have a “structural merchandising group” in place — presents a new challenge. “I’m excited to be with a smaller brand, a smaller team, and to be touching the product more. It’s a new way of working, a new way of bringing product to market,” she said. “This feels like a bigger challenge. But I’ve never taken on the same challenge twice.”