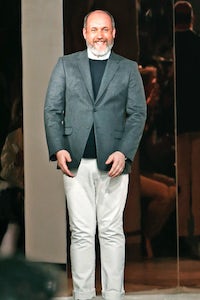 “After almost two years at Oscar de la Renta, personal circumstances require me to return to Europe. I have loved my time in New York where I hope to return at some point in the future,” Copping said in a statement.

“We have always been in the business of creating beautiful clothes,” said ODLR chief executive officer Alex Bolen. “And two of our greatest assets are our design studio and atelier. Our team will continue to work on next season’s collection with a keen focus on the level of sophistication and craftsmanship that are the hallmarks of the house. We wish Peter well in his future endeavours.”

Copping is departing Oscar de la Renta less than two years after he was officially installed at the family-owned company, whose namesake passed away in October 2014. Before moving to New York, the British-born Copping was artistic director of the Puig-owned Nina Ricci, and also spent time at Louis Vuitton and Sonia Rykiel. Copping's first collection for ODLR was well received, and he spent a good deal of time on the trunk show circuit, getting to know the longtime clients that are the bread-and-butter of the house's business. However, as seasons passed, Copping did not gain the sort of creative momentum that was perhaps expected of him.

The designer's departure is just the latest development in a series of turnovers at major houses both in the US and abroad. Earlier today, Louis Vuitton issued a statement denying rumours that Louis Vuitton women's artistic director Nicolas Ghesquière might be departing the brand before the end of his five-year contract, which is up in November 2018. Earlier in July, former Valentino co-creative director Maria Grazia Chiuri was named creative director of the women's collections at the house of Christian Dior. All indicators suggest that her predecessor, Raf Simons, is set to join Calvin Klein in the coming weeks.

These moves are becoming par for the course in the industry, where the standard three-year contracts have allowed designers to move more freely between roles. While Marc Jacobs spent 16 years at Louis Vuitton, and John Galliano spent 15 years at Dior, the tenures have shortened as designers and executives alike have begun to question the practicality, and sustainability, of the current fashion system.

While a replacement for Copping has not yet been named, the rumour mill is already humming with the possibility that former Oscar de la Renta design team members Laura Kim and Fernando Garcia could rejoin the company. Former ODLR studio director Kim, who spent 12 years at the New York-based fashion house, and senior designer Garcia, who was there for six, left the company soon after Copping joined to launch their own label, Monse, which has gained editorial, commercial, and celebrity steam since its Spring 2016 debut. The relationships they developed at ODLR with top red carpet stylists like Kate Young and Cristina Ehrlich proved to be fruitful from the beginning, with the Mad Men actress Jessica Paré wearing one of their runway looks to the Emmys just days after their first show. In February, the duo joined Carolina Herrera's design team as senior vice president of design and consultant, respectively. While Herrera remains at the helm of the Puig-owned brand, Kim and Garcia's influence could be felt in the Resort 2017 collection.

BoF will update this story as it develops.