Over the last two decades, Rick Owens and Michèle Lamy have managed to construct a fantastical creative world entirely of their own design and turn it into a commercially successful business, projected to generate $120 million in 2014.

Over the last two decades, Rick Owens and Michèle Lamy have managed to construct a fantastical creative world entirely of their own design and turn it into a commercially successful business, projected to generate $120 million in 2014.

PARIS, France — Rick Owens is a brand apart and it may not be too much to say that the designer and his wife and collaborator, Michèle Lamy, similarly exist in an alternate reality, a world of their own making — adjacent to ours, maybe, beholden to the same laws of physics and economic realities, but different, unique. Everything in Owens’ and Lamy’s life, as in their business (as if one can so easily differentiate between the two), is done in vigilant observation of Owens’ dictate, “We build, we don’t buy.” And, together, the two have conspired to build a world entirely of their own design, furnishing it solely with the fruits of their imaginings.

In Paris, this world is a five-storey mansion overlooking the gardens of the Ministry of Defence, minimally adorned with Owens’ furniture and art by Lamy’s daughter Scarlett rouge, and where, during the busiest times of the year as many as 15 employees scamper about the building’s first floor showroom and second floor offices in head-to-toe Rick Owens or DRKSHDW, his diffusion line. Upstairs, Owens spends his habitually routine days designing in the third floor studio, while the hushed austerity of the fourth and fifth floor living areas may suggest a modern hermitage, inhabited by a particularly devout monk of fashion. When in residence, Owens is as disciplined as any friar, hewing to a now famously strict regimen of work and exercise. But despite the precision and severity of his designs, and Owens’ own jokes about the rigours with which he pursues his vision (calling his production process “fascist”), the man himself is warm and engaging, almost puckish in temperament. And it is this spirit that animates Owenslandia as it grows outward from the elegant Palais Bourbon HQ.

A certain style, a certain way of working — that’s what creates the tribe. It’s not the clothes, or technical things. It’s the way of holding yourself in a different way.

It is a long way from the dusty town in central California where Owens grew up, though his own flowing designs still hold the charge he remembers feeling when he was just a boy, watching nuns from the local convent dragging their robes in the dirt. After moving south to Los Angeles, Owens enrolled in and then dropped out of art school. He studied pattern-making at a technical college, and, while working in a factory downtown, was soon introduced to Lamy, by his then boyfriend, as the best pattern cutter in Los Angeles.

Working on her menswear collection, the two became romantically involved. And by the time of Owens’ breakthrough Vogue-funded show at New York Fashion Week in 2002, they were living together in bohemian splendour in a row of storefronts in Hollywood, and Owens was selling his own line exclusively to Charles Galley, proprietor of an avant-garde boutique on Sunset Plaza. Later that year, Owens won the CFDA’s award for emerging talent and was approached by the centuries-old furrier Révillon, who hired him as creative director and brought him to France. In 2004, Owens entered into a partnership with his manufacturers in San Giacomo — “the Italians,” as he calls them — and began selling to Tommy Perse at Maxfield in Los Angeles, Maria Luisa in Paris, Joyce Ma in Hong Kong and Joan Burstein’s Browns in London.

But, even as their world has grown to include directly operated stores in Paris, New York, Seoul, Hong Kong, London, Tokyo, Miami and, soon, Los Angeles, little has changed within Owenscorp since its inception two decades ago. Elza Lanzo and her brother-in-law, Luca Ruggeri, are still CEO and commercial director, respectively. They still hold a shared 20 percent of the company (Owens and Lamy own the rest) — though it’s safe to say that those shares have significantly increased in value.

In 2010, Owenscorp revenue was around $40 million. In 2012, that number was closer to $70 million; in 2013 it exceeded $100 million and, this year, it’s projected to surpass $120 million. And, though he once flirted with the idea of selling to an unnamed conglomerate, Owens has grown his house without any outside help.

“We’ve never had to take any outside investment, thank god.” Nor has he ever outsourced production or in-sourced a single design. His is not an atelier system where a team of young designers submits ideas for a boss’ approval. Instead, he designs every piece from every line bearing his name. “I’m greedy,” he says, meaning he wants all of that, the fun stuff, for himself. “Really, I wouldn’t know how to do it any other way.”

And, even as their approach seems to have the company mushrooming, both Owens and Lamy maintain that they are simply moving and growing the way they always have — naturally, organically. “We are really just doing what feels right,” Owens says. “It isn’t that we are doing anything different,” says Lamy. “It just happens.”

On occasion, Owens has described the couple’s business partnership as “asking a gypsy to organise a war with a fascist.” He characterises himself as rigid about deadlines and not at all tolerant of people showing up late to work. Lamy is more comfortable giving a long leash to her collaborators. “She cajoles,” Owens says. “I demand. She lets people express themselves more; she lets the magic happen and I expect them to do exactly what I say. Which is how the furniture came to be her domain.” Turning to her, he says, “I think I inspire it. You direct it.” 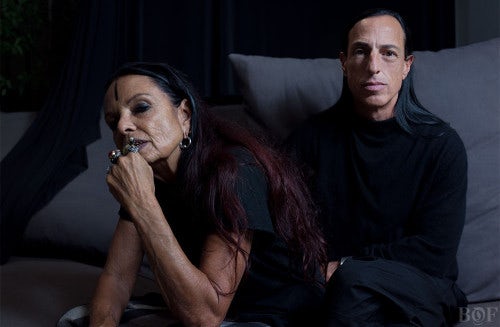 Aside from directing the construction and sale of the furniture line they began in 2010, Lamy is also in charge of the company’s furs (they no longer work with Révillon) and handles a couture-like strand of the business, welcoming cherished clients into the atelier for private fittings. When BoF meets with the pair in early December, Lamy is studying satellite pictures of possible locations for their LA store and dreaming aloud about the possibility of opening in Dubai and Las Vegas. She is aware of the mystique and artistry of the world she and Owens have built — that the world is itself a work of art. Last year, she was in talks about taking over a factory on an island outside of Venice where they could build a kind of artisan utopia, but the plans fell through.

Now, she thinks she might want to open a hotel, a place where their world is thrown open to the rest of us on a grand scale — part haven, part fairy tale. It becomes clear that, beyond their remarkable construction, what has always made Owens’ clothes special is the sense of community that they bear, the imprimatur of that world. Indeed, wearing Rick Owens has always seemed to be very personal, an externalisation of beliefs or identity, of allegiance to something.

“That’s where he has created the tribe,” Lamy says. “A certain style, a certain way of working — that’s what creates the tribe. It’s not the clothes, or technical things. It’s the way of holding yourself in a different way. But you see the way it is changing.”

One place we see it changing is on the street. Only three years ago, membership in Owens’ tribe seemed to be an all or nothing proposition. You would often find the devotee in head-to-toe Rick Owens or DRKSHDW — and the fully devout are still here, in greater numbers than ever. But now, too, they are joined by the casual partisan pairing a Rick Owens jacket with Nike Flyknits, or a former streetwear kid working Owens’ sneakers with a bomber jacket.

Helping his brand break beyond cult status are Owens’ ludicrously luxe oversized jersey shirts and leather jackets, which have been much-fetishised by the hip hop set that drives much of the streetwear market these days (it may be impossible to quantify the power of rapper Rick Ross claiming, “Rick Owens on me, bombers for my whole army,” for example, but the reality it underscores is plain). As streetstyle lensman Tommy Ton observes, “You definitely see more of Rick’s iconic staples, like his leather jackets, filtered down to the streets nowadays.”

After the wild sensation over his show last Autumn, when American step dancers paraded his clothes in a choreographed performance, it was reported that orders went up as much as 20 percent, but Owens doesn’t see cause and effect there. “I think orders are based on the last season, how it sold.” Indeed, the uptick in orders, he says, is consistent with the growth over the last several years. Sprouting from the lucidity of his vision, protected by the brutalist simplicity of their operation, and maintained by his own intense commitment, Owens’ business has developed a momentum of its own.

“He’s one of the few that really sets the new direction which leaves everybody else to copy,” says Perse, the owner of Maxfield in LA. “But no one is able to replicate his stuff in a way that comes close to what he does. The man was obviously born a natural, because he just gets better and better.”

“It would take me ten years to burn this whole thing down,” Owens says, in signature deadpan. “Even if I were to go insane for five years, there is still enough in the archive that they could sell. It would take another five years before people caught on and it all came crumbling down.”