NEW YORK, United States — When Oxford Dictionaries revealed that they had chosen “post-truth” as the 2016 word of the year, the famously restrained intellectuals behind the global guide were not at all shy about naming the person who inspired their decision. “We first saw the frequency [of the word “post-truth”] really spike in June with buzz over the Brexit vote and again in July when Donald Trump secured the Republican presidential nomination,” said Oxford Dictionaries president Casper Grathwohl.

Indeed, for many of President Trump’s passionate supporters, objective facts seem less influential in shaping opinion than emotional appeal or personal belief. What worries the president’s opponents is that he seems able to undermine the integrity of hard evidence by tapping into the new appetite for post-truth politics. This, in turn, has spawned an entire industry of fact checkers who now hang on Trump’s every word, regularly clashing with him over facts and figures. From the national murder rate to the number of people at his own inauguration, more than a few of the numbers cited by President Trump since he took office have been wrong, exaggerated or hotly contested. 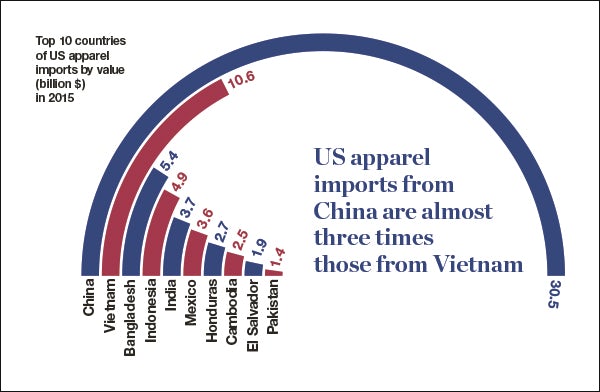 One of the statistics Trump often repeats that few would dispute, however, is the $500 billion US trade deficit (though he did try to inflate the number to $800 billion by not factoring in the services surplus that helps offset the goods deficit). According to the US Department of Commerce, $500 billion reflects the amount by which the country’s total value of imports exceeded exports in 2015.

What is less well-known about the deficit is the role fashion plays in it. The United States imports $82 billion more in clothes than it exports, mainly from Asian nations like China, Vietnam and Bangladesh, but also from places closer to home such as Mexico, Honduras and El Salvador. Back in 1995, US apparel imports totalled $36.8 billion but, by 2015, the country’s dependence on them had reached new heights and imports more than doubled to $87.9 billion.

Exacerbating the growing gap, apparel exports actually fell by $300 million during the same 20-year period, achieving the relatively humble figure of $6.1 billion. To make sense of this stark disparity, consider what it means on a more human scale. For every $1 worth of clothes America exports, it imports more than $14 worth.

Bringing apparel manufacturing back to America in a meaningful way is an impossible task for a variety of reasons.

It is a similarly lopsided situation across the shoes and handbags categories, which represent $26 billion and $3 billion of the deficit, respectively. Combined, the fashion industry’s three biggest product categories account for more than 22 percent of America’s total trade deficit. When you add other categories like sports bags, travel goods and men’s accessories, fashion’s share of the burden approaches a quarter.

Clearly, the offshoring of American fashion manufacturing has taken a huge financial and human toll over the decades. As late as 1990, the apparel manufacturing industry employed nearly 939,000 people. But as manufacturing moved overseas, the sector lost more than 85 percent of its workforce. Today, the US Department of Labor estimates that the sector employs less than 130,000 people.

While it is tempting to see reshoring as an attractive answer, fashion manufacturing experts believe that it is only feasible for small quantities and highly specialised runs. Without doubt, Americans should celebrate the many SMEs (small and medium sized enterprises) across the fashion industry helping to breathe new life into parts of the garment centres of New York, Los Angeles and elsewhere. However, scaling domestic production up to the level of big business is another matter.

“Bringing apparel manufacturing back to America in a meaningful way is an impossible task for a variety of reasons,” Edward Hertzman told BoF in November. The consultant and founder of Sourcing Journal, a trade publication covering the apparel and textiles supply chain, describes the high cost of American labour as an almost insurmountable barrier. Even the brand conceived around the Made in America principle – American Apparel – recently relented, announcing that it too would start manufacturing overseas.

Yet the problem may lie less in the trade deficit itself than in how it is manipulated. Many eminent economists and trade experts dispute President Trump’s interpretation of the trade deficit as a humiliating violation by foreign nations or trade blocs such as NAFTA and the would-be Trans-Pacific Partnership. 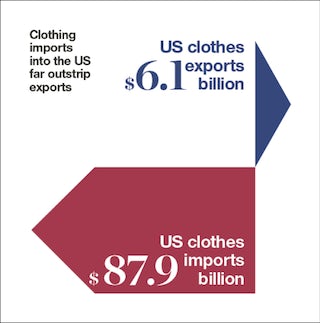 Mainstream economists tend to draw fewer direct correlations between the deficit and the health of the US economy than the president. Few see trade relations as a zero-sum game where a deficit automatically makes America the “losing party” and even fewer believe protectionist trade measures like Trump’s proposed “border adjustment tax” are a solution to the decline of American manufacturing.

Instead, they criticise the way that the deficit is calculated and used to shape policy. Economists at the Organization for Economic Cooperation and Development (OECD) and the World Trade Organization view it as a blunt instrument in need of reform. Teams at these institutions are currently developing a new methodology that better reflects the complexity of global supply chains.

Rather than allocating the value of a garment wholly to the country that supplied most of its labour, value can be divided among several countries reflecting where various components are produced and the origin of an item’s intellectual property. While this won’t stop the decline in domestic manufacturing, it will paint a more accurate picture of the contributions that American fashion brands make towards the economy – regardless of where they manufacture.

Perhaps more importantly, it will rightfully acknowledge the value added by millions of Americans who work in non-manufacturing roles like design, creative, retail and ancillary services throughout the country’s dynamic fashion industry.