NEW YORK, United States — Anyone who has visited Dover Street Market, the multibrand, museum-like network of retail stores, will find familiarity in the bright, almost-clinical lighting of "Rei Kawakubo/Comme des Garçons: Art of the In-Between," the latest exhibition at the Costume Institute at the Metropolitan Museum of Art in New York City, and the first to single out a living designer in more than 30 years.

All the better to see the mind-bending lumps and bumps, pleats and cinching, stuffed bundles and flat panels of 140 womenswear designs, many of which are displayed quite close to the ground instead of in large-scale diorama boxes. This means that a visitor could reach out and touch several items with little effort.

It may have been tempting, but on Monday evening, 550 guests managed to keep their not-so-grimy paws off of the goods, zig-zagging in and around the vignettes with champagne flutes in hand instead. 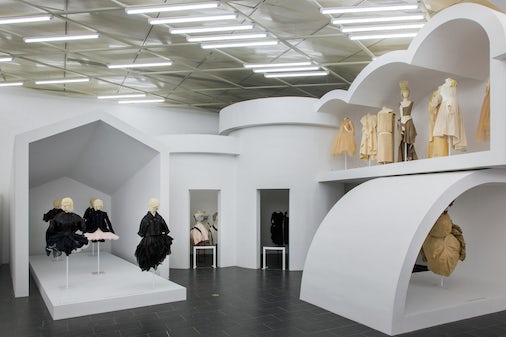 Of course, they were all here for the Met's annual Costume Institute Benefit, also known as The Met Gala, also known as Fashion’s Oscars. Co-chaired in 2017 by Tom Brady, Gisele Bündchen, Katy Perry, Pharrell Williams and Condé Nast artistic director Anna Wintour, who is also a museum trustee, the funds raised by the event — approximately $13.5 million in 2016 —  are more important than ever.

In February 2017, director Thomas Campbell resigned after a $40 million deficit forced the museum to cut staff and postpone a $600 million expansion. According to the museum, the party is the main source of funding for the Costume Institute (and the Costume Institute only), which uses those funds to stage exhibitions, publish books, make acquisitions and maintain the facilities.

This year’s exhibition is somewhat of a diversion for Andrew Bolton, curator-in-charge of the Costume Institute, whose focus as of late has been sweeping themes — such as China or technology. The examination of Honorary Chair Kawakubo, whose wares question accepted ideas around silhouette and the general purpose of clothes, marks the first of a living designer since Diana Vreeland’s meditation on Yves Saint Laurent in 1983.

The fashion world's adoration and admiration for Kawakubo could be wholly felt on the red carpet, where many designers paid subtle homage to her, whether it be the gingham check on Lena Dunham’s Elizabeth Kennedy dress, the red of Katy Perry’s Maison Margiela mourning gown, or Jaden Smith in all-black Louis Vuitton, carrying a bundle of his own hair — bleached braids, gathered together — as an accessory.

[Kawakubo] is an example of somebody who has a very good relationship with her ID.

“[Kawakubo] is an example of somebody who has a very good relationship with her ID,” Owens told BoF during the cocktail hour, joking that Lamy’s own Comme des Garçons archive was as big as the house’s. “We have too many clichés in fashion. Something like this [exhibition] reminds us that there are other options.”

The idea that Kawakubo is a “designer’s designer” helps to explain why she was a natural choice for Bolton, and a natural choice to be honoured at an event that above all celebrates the fashion industry. “Whether it’s Nicolas Ghesquière or Marc Jacobs ... she’s such an icon and a heroine,” Wintour told BoF at a press preview on Monday morning, following remarks from Bolton and Honorary Chair Kennedy, who served as the the American ambassador to Japan from 2013 to 2017. “None of them can believe she has actually come, because she’s such a mystery woman.”

But while the Comme worshippers turned out in very respectable droves, there were other sorts of statements on the red carpet. For instance, AirBnb co-founder Joe Gebbia attended with Park Yeon-mi, the North Korean defector and human-rights activist whose 2015 memoir “In Order to Live: A North Korean Girl's Journey to Freedom” documented her family’s escape from the country, which has recently taken to ballistic missile testing, with threats of pre-emptive strikes against the United States looming.

The intention, according to Gebbia, was to use the power of the Met’s promenade — which provides plenty of visual content, and traffic, for fashion publications far beyond Vogue.com — in a meaningful way.

While Kawakubo herself is not outwardly political — “She’s almost interested in politics,” her husband Adrian Joffe told BoF’s Tim Blanks in a recent interview — her subversive, unapologetic creativity lends itself to weightier statements. “She’s fearless, and she’s not worrying about what’s commercial and what’s going to sell. It’s a real, true aesthetic,” Wintour said.

And yet, while the exhibition’s outfits — meticulously numbered so that the rigid among us may follow in exact sequence — may be more art than commerce, Comme des Garçons is a wildly successful business, one whose brand extensions have made it a household name in certain parts of the world and generates revenue of over $280 million a year. Like any major museum show, there will be a shop set up as guests exit, albeit a shop filled with exclusive products, including Nike trainers, t-shirts and leather zip pouches.

It could be argued that it’s the combination of the creative and commercial that will help to guarantee the exhibition's success, although Wintour sees it differently. “To me, we were really focusing on her creativity and her dream and her point of view. It’s not about a t-shirt,” she said. “[Kawakubo’s business accomplishments] just show that you can be both creative and successful.”

Now, as the museum readies itself for the official opening on May 4, the work of attracting visitors begins. Since the recession, other New York institutions have emerged as competitors to the Metropolitan for funding and audiences, and exhibitions with broad appeal like those of the Costume Institute help the museum retain its edge. Wintour believes that many will attend out of “fascination, admiration, interest, curiosity, something that will be provoking, very transgressive, very progressive.” And she added, “If you’re not a fashion obsessive, you’re going to be incredibly baffled. But art should do all of those things.”