Dapper Dan, Kimberly Drew, Yoon Ahn and more discussed how to create sustainable change in the industry at Frieze Academy’s Art and Fashion Summit in partnership with The Business of Fashion.

NEW YORK, United States — Yoon Ahn knows how to make a name and a brand for herself.

The designer started her fashion and jewellery line at the margins of the global fashion industry, but today sits at its centre as director of jewellery at Dior Homme. She spoke at Frieze Academy’s Art and Fashion Summit in collaboration with The Business of Fashion, in a panel moderated by BoF editor at large Tim Blanks.

The summit focused on major shifts in both fashion and art in an increasingly divisive time by bringing activists, artists and industry leaders for a series of discussions on the industry’s evolution. Blanks kicked off the summit by discussing with Ahn the radical shifts in the industry by those who’ve redefined the background, history and significance of the roles they’ve taken on in their respective fields.

With no formal training or traditional design experience, Ahn now holds a role at one of the biggest fashion house’s in the world, collaborating with Kim Jones, artistic director of Dior men, to oversee the men’s jewellery collection. Ahn’s unconventional path to Dior, from moving around the world for her father’s job in the military to moving to Tokyo to start her own jewellery and clothing line Ambush, has set a new standard for a traditionally exclusive industry. In discussing her approach to working at Dior, Ahn said, “I think all the steps I’ve taken to where I am now come from a place of ‘Why not?’ or ‘How come?’” Speaking with Blanks about a wide variety of issues, including hot topics like diversity and sustainability, Ahn stressed that her background and status as an outsider in the industry allowed for the success of her own label and ultimately her role at Dior.

Starting her own clothing and jewellery line out of Japan, for instance, gave Ahn the ability to experiment with designs in her own community and space, outside of the hyper-competitive fashion scenes in New York or Paris. Ahn noted that she started her brand by simply Googling manufacturers in Japan, and repeatedly faced rejection in getting her clothes and jewellery produced.

After managing every facet of her own line from supply chain to marketing, Ahn had a comprehensive understanding of how to create and manage a sustainable business that informs her approach to designing jewellery at Dior.

“I can actually contribute more to the brand as well because I’m more in touch with the customers and exactly what works and what doesn’t work in the market,” she said.

In many ways, emerging designers like Ahn have driven collaboration in the industry as well as a need to recognize growing talent outside of prestigious fashion schools and large fashion houses. Creating significant and sustainable change within fashion and art was central to the summit, as fashion designer Daniel “Dapper Dan” Day, artist and activist Kimberly Drew and Helmut Lang editor in residence Alix Browne discussed their careers with former Vogue senior fashion writer Marjon Carlos.

“The very fact that I’m here has everything to do with disruption,” Dapper Dan said.

Dapper Dan, Drew, Browne and Carlos all advocated for brands to take a critical approach in how they implement new products and strategies to respond instead of react to current trends regarding diversity. Citing Fenty Beauty, Carlos noted brands trying to rush out products to compete in a shade-matching arms race, with efforts that only became apparent after Fenty Beauty’s shade range announcement. 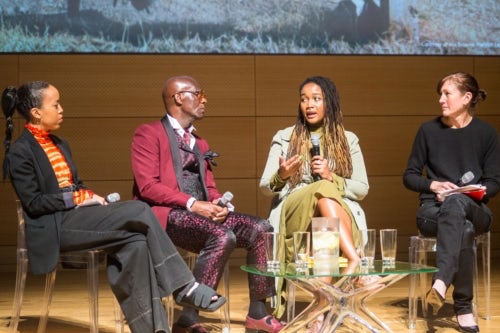 “Sometimes it feels like these things are just boxes that are ticked off,” Carlos said. While many brands have recently rushed to appoint people of colour to diversity boards in response to public backlashes, including Gucci’s blackface mishap, Dapper Dan noted the stress this can cause for minorities who have only recently been allowed to participate in the discussion.

“When you’re the last one invited to the party it takes you a while to get the momentum to get up and start dancing,” he said. “I feel like a fashion politician.”

While many of the speakers at the summit have been hailed as disruptors by those within the industry, Drew was quick to note the connotations of the word in exclusive industries.

“I hate the word disruptor. I hate it — it establishes a normal and privileges a normal and way of doing things,” said Drew. “It gives too much power to the way things are done.”