Andres Sosa joins Gwyneth Paltrow’s company from The Outnet and will oversee international expansion beginning with a London pop-up in the fourth quarter of this year.

LOS ANGELES, United States — Ten years after actress-turned-entrepreneur Gwyneth Paltrow founded Goop as a newsletter from her home in London, the wellness content and commerce company is heading back to the UK to open its first pop-up shop there. In March, Goop raised a $50 million Series C round to support product development, content production and international expansion plans — including the hiring of its first chief marketing officer. Andres Sosa, formerly the executive vice president of sales, marketing and creative at Yoox Net-a-Porter’s The Outnet, starts Monday.

In addition to overseeing all brand marketing for Goop, Sosa will lead the international expansion efforts. “All my career has been about taking brands and seeing how one can grow globally while still being true to the brand and the DNA,” he said. Sosa is originally from Venezuela and spent the last 20 years in London. At The Outnet, Net-a-Porter’s off-price sister retailer, he focused on turning readers into customers across markets. “There is a lot of content out there, and the main challenge is to be able to create content that cuts through,” said Sosa.

At Goop, he not only wants to turn readers into shoppers but also into ambassadors within their markets. According to the company, 25 percent of its online audience comes from outside the United States. Canada, which Goop entered in 2017, and the UK are the most represented regions. “It’s about really being able to bring to the customer that she hasn’t had here,” said Sosa, referring to the London pop-up planned for the fourth quarter of 2018. He says the rollout in London will serve as a test for other forthcoming European markets. Goop will begin shipping internationally to the EU from its US warehouses in the fourth quarter of this year. 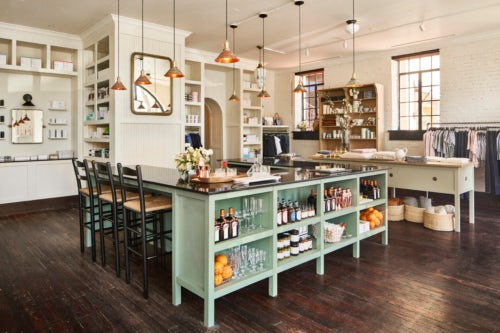 The London pop-up will focus on Goop-branded product — which includes a clothing and skincare line, among other collections — complemented by third-party brands from Los Angeles and London to commemorate the company’s past and present. As does for its US pop-ups, Goop will partner with brands like Cadillac and Cointreau to support the store operations.

Blair Lawson, Goop’s chief merchandising officer, said the company wanted to establish its contextual commerce business model — which mixes content with relevant and shoppable product — in the US before expanding to new continents. And that for much of the company’s history, Goop didn’t engage any formal marketing. “Having Gwyneth as the founder did a lot of drive awareness,” she said. “As we start to be more sophisticated in our business… we want to be really intentional and thoughtful about the way we are approaching [our] markets.”