With a unique aesthetic vocabulary, an influential stockist base and incipient production in Asia, luxury streetwear label Hood By Air is poised for growth. BoF spoke to designer Shayne Oliver about the cult brand he’s taking to the next level.

NEW YORK, United States — “It’s been personal, about wanting to look really good. I never set out to change the menswear market. It was about integrating the downtown skate thing with being from Brooklyn and being androgynous and somewhat transgender and figuring how it all worked together, but in a way that was viable for men in general,” said designer Shayne Oliver, whose 7-year old luxury streetwear label, Hood By Air, an unholy collision of clubkid, artsy, urban and high-fashion sensibilities, has a freshness not seen amongst emerging New York fashion labels for decades.

With its bold 1990s-style graphics, striking silhouettes and high-fashion elements borrowed from the playbooks of Raf Simons and Helmut Lang, Hood By Air has managed to capture the energy of today’s mashed-up youth culture while upending traditional concepts of power, race and gender with a look that is both sensual and tough, androgynous and masculine. 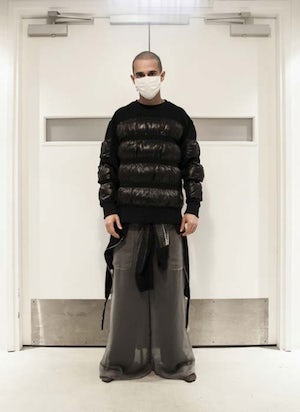 A look from Hood By Air's Fall/Winter 2013 collection | Source: Hood By Air

Last February, Hood by Air’s Fall/Winter 2013 collection, presented at a show featuring a catwalk appearance by Harlem-born rapper A$AP Rocky, was a hit with the press. But as Oliver prepares to take part, this weekend, in a Toyota-sponsored pop-up project in Los Angeles, for which the designer has created a capsule collection of t-shirts, backpacks and other small accessories, it’s increasingly clear that the cult label has the potential to translate its cool factor into commercial success.

Oliver’s grandmother was a seamstress in Trinidad. But he cultivated his early interest in clothes while attending Manhattan’s gay-and-lesbian high school, Harvey Milk, where he participated in programs sponsored by Tommy Hilfiger and Ralph Lauren. While still at school, he was a regular at Luxx, weekly electroclash parties held at a short-lived but legendary nightclub in Williamsburg, Brooklyn. At the same time, Oliver was part of the downtown Manhattan skater scene and felt the pull of designers like Helmut Lang, whose early work — latched, pieced and otherwise deconstructed — was a strong influence.

“I discovered the whole Lang and Gaultier thing by going to stores like Tokio7. We started to wear and experience these conceptual pieces that weren’t necessarily meant for us and our generation. It inspired us to play around with these concepts and figure out how they fit into our lifestyles. That’s when I learned that one can have an opinion and express it through a piece of clothing. Those stores had some of these designers’ crazier, more difficult-to-wear pieces. They had this complexity… that spoke on so many different levels.”

Oliver launched his own label in 2006 as a line of t-shirts, made for friends, emblazoned in bold capital letters with one word: “HOOD.” And while the label has since matured, it hasn’t lost its distinctly New York edge, combining in a single look, for example, the athletic shorts seen on the famous basketball courts of West 4th Street with the pleated aesthetic of a schoolgirl’s uniform. “It tends to happen from the energy of the city. The younger guys and girls in particular have that urgency I’m looking for. They’re always in the moment — what you see on them is what’s happening right now. That’s the signaling point for me and what I try to capture. Maybe it’s about a sweatsuit — but how do you make that luxury?”

Over the years, Hood By Air has faded in and out of existence. Initially, the label’s garments were produced by local Dominican seamstresses and the label stalled completely, in 2009, when production fell through. For the next two years Oliver, who is also one half of the DJ duo known as “Ghe20 G0th1k,” focused on throwing parties and producing music. But the label’s temporary absence actually contributed to its cult status in New York’s art, fashion and music scenes.

“The label’s following changed because of the heritage that was created when we stopped producing. Suddenly, it incorporated a bigger tree of individuals,” said Oliver. And when the label returned, for Spring/Summer 2012, it attracted the support of influential downtown store Opening Ceremony and online publication and e-commerce site VFiles.

“When we released the Spring/Summer 2012 ‘Classics’ collection it was swallowed up by everyone who had been waiting for the brand to return,” said Oliver, referring to the label’s increasingly important commercial line.

Currently, Hood By Air’s ‘Classics’ pieces start at $160 for a long-sleeve crew shirt, though “next season we will move into more elaborate pieces and deeper techniques, so some of the prices might go up, but they will stay under $400,” said the designer.

Oliver also plans to build his accessories offering, add a denim line and expand his ‘Classics’ range into outerwear.

Additionally, the designer is building his manufacturing and distribution networks, having established a partnership with Clot — a Hong Kong-based retailer that has collaborated with A Bathing Ape and Nike — as well as new relationships with factories in China, where the label is expanding production.

An online store is set to launch later this year. And while Hood By Air’s current stockist base is still relatively small — alongside Opening Ceremony and VFiles, the label is now sold at Colette in Paris, Harvey Nichols in London and RSVP Gallery in Chicago — it includes some of the most influential stores in the world, some of which report 100 percent sell-through.

But as Hood By Air expands, the question is clear: can Oliver convert the original aesthetic vocabulary he has established into commercial success without diluting his label’s carefully honed credibility?