How Cardi B Makes Fashion Moves

The rapper tells BoF about her fashion strategy and why she chose to partner with white-hot Fashion Nova for her first clothing line. 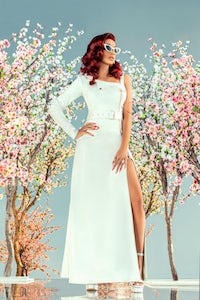 How Cardi B Makes Fashion Moves

The rapper tells BoF about her fashion strategy and why she chose to partner with white-hot Fashion Nova for her first clothing line.

LOS ANGELES, United States — Two weeks prior to the launch of her collection for Fashion Nova, the rapper Cardi B is breezily recounting her relationship with the Los Angeles-based fast fashion retailer, one that dates back to 2014, before she had two No. 1 singles on Billboard’s Hot 100 and before she amassed an eye-popping 34.6 million Instagram followers.

“They are always loyal to me. It's like a friendship now,” she said of the bodycon clothing line that churns out 1,000 new items a week. “I'm also really proud of them. Their brand has sold so much, and I have sold so much at the same time and it's like, 'Yay, we did it!' We both did it at the same time.”

Her collection, which goes on sale November 15, comes at a time when Fashion Nova’s popularity may just rival the rapper’s. According to a Piper Jaffray survey last week, Fashion Nova was the sixth most popular e-commerce site among upper-income teens, beating out brands including Forever 21, Lululemon and Adidas.

Since launching as an e-commerce site in 2013, Fashion Nova has managed to harness a lightning-in-a-bottle type of hype, fueled primarily by a network of prolific micro influencers who post photos of themselves wearing the curve-hugging clothing on Instagram. That, coupled with the constant flow of new product that Richard Saghian, chief executive of Fashion Nova calls “ultra fast fashion,” has catapulted the company into the top tier of online retail.

But the exposure and success has drawn competitors, who are taking a page out of the Fashion Nova playbook, as well as complaints from customers about fit and quality. As the marketplace becomes more saturated, the brand is looking to prove it can do more than churn out an endless series of disposable — and easily imitated — dresses, pants and tops.

Enter Cardi B. True to form, the rapper is as candid about her relationship with the brand (she has previously stated that she receives $20,000 a month to wear the label and promote it on social media) as she is her plastic surgery and personal life. But though she was among Fashion Nova’s earliest fans, recently, she’s worn Moschino, Tom Ford, Dolce & Gabbana and Alexander Wang for events ranging from the Grammys to the Met Ball and New York Fashion Week. She’s following fellow female R&B stars like Rihanna and Beyoncé who have had success with their break into fashion, expanding their brand and sartorial influence into their own lingerie and streetwear lines, respectively.

I want to make these women look so happy — so radiant, sexy, so corporate and poppin'. I want them to look like they’re wearing Gucci and Prada.

No doubt the impressive lineup of designers clamoring to dress Cardi B has only bolstered the Fashion Nova brand, which she continues to wear with the same frequency she does high-end items. Cardi B’s collection, the first celebrity collaboration for Fashion Nova, comes at a time when there is a seemingly perfect storm of her popularity and a growing appetite for authenticity and inclusivity among consumers.

The line will consist of 80 looks ranging from junior to curve, with an average price point of $40, including suiting, blouses, dresses, outerwear, denim, knitwear and accessories. In designing the collection, Cardi B said her goal was to create clothing that would blur the lines between expensive and inexpensive, with a focus on quality fabric and fit.

“Every little detail to me matters,” Cardi B said. “I want to make these women look so happy — so radiant, sexy, so corporate and poppin'. I want them to look like they’re wearing Gucci and Prada, but they’re not, they’re wearing my line.”

The pre-launch promotion stays true to Fashion Nova’s roots — relying on influencers to spread the word — but on a vastly amplified stage. Cardi B, whose real name is Belcalis Almanzar, has been teasing her forthcoming collaboration with Fashion Nova on social media for several months in the same manner that she evangelizes the brand on Instagram, whether she’s wearing it head-to-toe or paired with Christian Louboutin boots and a Balenciaga bag.

Fashion Nova will have a launch event in Los Angeles starting November 14 at 8pm, featuring musical performances and drumming up even more excitement for the collection launch which happens at midnight. The event will be livestreamed for fans anywhere to watch, but the brand also has plans for a “Party with Cardi” online sweeps in which 10 customers will be flown out for the event. Shoppers will be able to purchase in real time when the collection goes live at midnight, November 15.

“Because Cardi styles our product with high end luxury brands such as Gucci and Givenchy, we will be able to slowly dissolve the perceived separation between 'high-end' and 'cheap' clothes and make trendy fashion accessible to everyone,” said Saghian in an email. “This will really resonate to a wide consumer base who essentially want it all; it doesn’t have to be one way or the other anymore.”

Cardi B had specific ideas for the way she wanted the trench coats in collection to fit. She’s been seen wearing her fair share of the item, including a dark green leather Drome jacket on Jimmy Kimmel Live last month and a black Alexander Wang to New York Fashion Week in February.

She said the fit of her jackets is “something that I am really proud of,” adding “I don't want people to buy jackets that will rip while they're wearing it.”

Sometimes, designers don't have what I'm looking for.

Fashion Nova originally gained an edge in the market by making clothes that worked for voluptuous body types — an aspect of the brand amplified by Cardi B’s Instagram mantra: “I can buy designer but this @fashionnova fit!”

She said like many women, she has had a hard time finding clothing to fit her curves, one reason she still wears Fashion Nova even with designers vying to dress her.

She said her biggest challenges in creating the line was to make pieces that would look good on a range of body types. Her upcoming collection includes several styles of curve-hugging silhouettes, partly to address the many issues she has had with denim in the past.

“What I don't like about wearing jeans is when the butt is boxy,” she said. “And I don't like when there is that little space in the butt part, between your back, do you know what I'm talking about? That's my biggest pet peeve.”

Fashion Nova has a legendarily rapid production schedule — the company relies on a network of 1,000 manufacturers to turn out endless variations on streetwear and designer-inspired looks, sometimes just days after a Kardashian or Hadid wore them on the red carpet.

The clothes pumped out by this network are of varying quality, and while customer complaints about an anonymous midi-dress might fly under the radar, the stakes are higher with Cardi B’s high-profile collection.

The upside is that the company has the ability to quickly ramp up production to match demand.

“We have no doubt that it will sell out in minutes,” Saghian said. “We’re prepared for the demand and expect the line to be very lucrative. We’ll be looking for more celebrity collaborations as well.”

And Fashion Nova can quickly produce looks inspired by new Cardi B lyrics, or an outfit she wears that goes viral.

“The biggest thing with Cardi is that you have a young woman repping a market of young women who are not usually marketed to. They see themselves in her and because of that, they’re rooting for her,” said Kenny Mac, founder and creative director of strategic planning agency Creative Contraband and the former marketing director for Sean “Diddy” Combs.

“If in a song, she’s talking about, 'I like those Balenciagas, the ones that look like socks...' Fashion Nova has the infrastructure to develop and design and sell in a quick fashion. It’s very transactional.”

Saghian said he’s already looking for his next celebrity collaboration. And Cardi B said she’s been bitten by the design bug with plans to branch out into new markets -—even kidswear.

“I definitely want to branch out into shoes. I love shoes. I have a big fetish for shoes,” she said. “And I want to be able to design what I want for my daughter to wear.”