In Bloom: 4 Florists Behind Some of Fashion’s Most Dramatic Sets

In their tweets and Instagrams, editors and bloggers unanimously noted the ravishing floral setting, which reportedly took one million blooms — including peonies, goldenrod, dahlias, carnations, delphiniums, orchids and several types of roses — to build. And within minutes, pictures of the flower-filled, fairy-tale show location were trending online, helping to establish Simons’ new, romantic-modernist direction for Dior in the minds of millions of fashion spectators around the globe. Indeed, the effect was immediate and powerful. But this certainly wasn’t the first time flowers were being used by a leading fashion designer to help captivate audiences and communicate a creative vision.

Seasons before Simons, Alber Elbaz had male and female models walk through door-like archways made out of fresh flowers to frame his men’s and women’s creations for Lanvin. And both Stella McCartney and Dries van Noten have had walls of plants and flowers built as backdrops for their shows, the work of botanist Patric Blanc and celebrity florist Daniel Ost, respectively.

BoF spotlights four leading florists, whose artistry is helping to push fashion forward, one petal at a time. 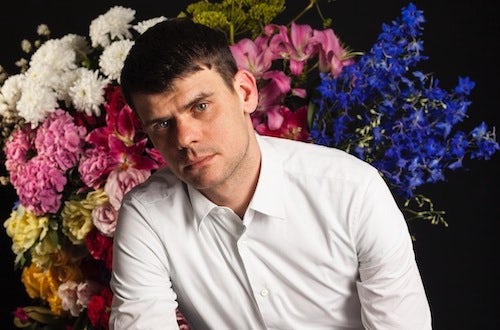 The floral spectacle of Raf Simons’ Dior debut was the work of veteran Paris flower maestro Eric Chauvin and Antwerp-based florist Mark Colle, whose collaborations with Simons have put him and his small flower business, Baltimore Bloemen, firmly on the rise. Colle first caught the attention of the global fashion tribe when Simons enlisted him to create the six strikingly lush, plexiglass-encased bouquets that helped make the designer’s final show for Jil Sander, Autumn/Winter 2012, an unforgettable fashion moment.

But Simons, who discovered Colle’s small, six-year-old shop thanks to its elaborate window displays, isn’t the only one to have taken notice of the young florist’s offbeat sensibility. Colle has also collaborated with Dries van Noten, Ann Demeulemeester and Hermès on everything from showroom decorations to in-store installations and special projects — and recently worked with Pierre Debusschere on a project for Dazed & Confused.

Colle’s floral style is characterised by unorthodox choices. “I like ‘ugly’ things,” he told BoF. “I like the challenge of working with flowers nobody else likes anymore, or buying five random bunches of flowers at a gas station and combining them until you get something truly amazing.”

“The impact of flowers is very underestimated — and also how much thought goes into it,” he continued. “Every flower I use is very carefully chosen. It can be quite overwhelming. And some ideas are decided at the very last minute, and suddenly you are in a position where you have to find 40,000 orchids where there are only 3,000 available and you have 36 hours left to find the remaining 37,000.”

He believes it is the ephemeral nature of both fashion and flowers that explains the synergy between the two disciplines. “Fashion moves fast and flowers are similar — they come, they bloom and then they’re gone.” 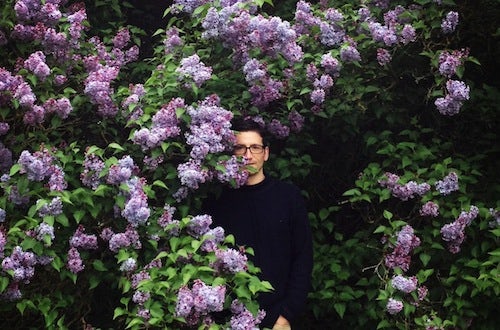 Earlier this year, Rambert Rigaud traded the ateliers of Yves Saint Laurent and Dior Haute Couture for a little flower-shop of his own. After spending 17 years working as an atelier director at two of France’s most vaunted fashion labels, he opened Rambert Rigaud Fleuriste en Herbe, specifically catering to the industry that he knows as intimately as few others do.

“The point, when I quit my old line of work, was to continue working with the fashion houses, but now as clients.” Indeed, his young business now counts both his former employers, Dior and Saint Laurent, as regular clients, in addition to Cartier, Carven and the hip London footwear brand Charlotte Olympia.

His breakthrough commission, however, came just weeks after opening shop, when Rigaud was asked to create the floral concept for an ultra-lavish Valentino party at the Hôtel Salomon de Rothschild during the Fall 2013 Paris collections. Guests were greeted by white and blue flower arrangements in Delft vases, perfectly channeling the seasonal vision of designers Maria Grazia Chiuri and Pierpaolo Piccioli, who were inspired by 17th century Dutch paintings.

Rigaud describes the signature aesthetic of his arrangements as “definitely not minimalist” and credits his former bosses John Galliano and Stefano Pilati with his eye for the exuberant. “They taught me to mix colours and textures,” he said. “Therefore, I will never send you a huge bouquet of white roses. I think that’s quite boring.” Instead, Rigaud’s work often incorporates branches and copious foliage. “There are no rules for me. That’s the advantage of not having a traditional florist background.” 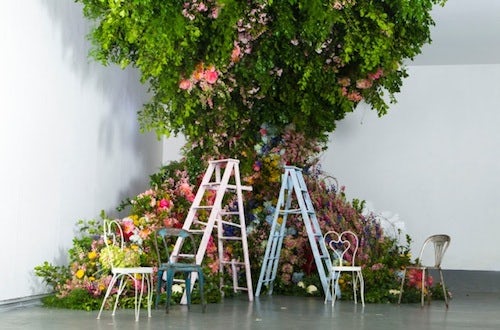 Jay Z once liked one of Raquel Corvino's floral arrangements so much that he stopped a stranger on the street to enquire who made it. Kanye West has also waxed poetic about her work. But besides her unlikely following amongst hip-hop moguls, the 35-year-old Corvino lends her floral talents to a range of labels, from Mary Kate and Ashley Olsen’s The Row to Chloé, Carven, Helmut Lang and Theory.

Corvino’s creative briefs are as varied as her client list. For a party at Louis Vuitton’s Soho store, for instance, her only directive was to do a “very Indiana Jones, explorer kind-of-thing.” Meanwhile, when working on a show for The Row, she found herself trying to capture and replicate the ambiance of one of the Olsen twin’s private homes through flowers. But in every case, a constant trademark of Corvino’s meticulous, clean arrangements is that the container is as considered as the flowers themselves, which sometimes means sourcing a rare vintage pot from Vietnam and then proceeding to dye it black for maximum effect.

On her first break, Corvino said she was simply at the right place at the right time. While still a college student at New York University in the late 1990s, Corvino started doing flowers for the Mercer Hotel in Soho, which quickly became the unofficial hub of the downtown fashion scene. When the Rem Koolhaas-designed Prada store opened across the street in 2001, Miuccia Prada hosted a private dinner at Mercer Kitchen, the hotel’s subterranean restaurant, and Corvino's arrangements were front and centre.

Corvino says she likes working with fashion clients because "we speak the same language. [My job] is to translate their vision into flowers.” Indeed, being an interpreter of a label’s vision and values is especially crucial to Corvino’s work today as "more and more brands are using flowers to communicate their DNA and not just as mere decoration." 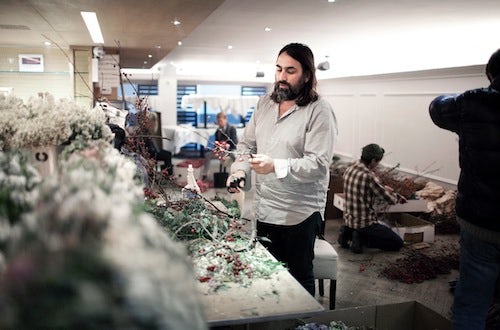 Boutemy first appeared on the international fashion radar when he worked on Sofia Coppola’s 2006 film Marie Antoinette. Ever since, the Normandy-born Boutemy has been a favourite of designers who seek him out for his fragile, romantic bouquets, which often include wild flowers and stems of wheat. “The flowers I choose come from nature — wild, simple but beautiful,” he told BoF.

Boutemy’s work has appeared on the cover of American Vogue — a collaboration with photographer Mario Testino featuring Lady Gaga — as well as in several Lanvin runway shows, including the aforementioned floral doorways. Designer Dries van Noten asked him to make flower installations for the opening of his Paris store. But regardless of who commissioned them, Boutemy’s creations are distinguished by their imperfect, artfully unstructured appearance.

Because of the steady fashion industry following he has built, the down-to-earth florist often finds himself frequently in Milan, New York and Paris. But despite his rarefied clientele, Boutemy prefers to preserve the low-key sensibility that led him to choose Brussels as his base. “I want to stay simple and discreet. I do the composition myself and I want to stay near the flowers [and] arrange them,” he said. The florist’s aspirations are accordingly humble. “I want to open an atelier to have more time to prepare the composition and invite clients into my environment: countryside, nature, quiet.”