BOSTON, United States — While it’s challenging to birth a successful new ready-to-wear label or handbag line, it’s arguably even tougher to build a shoe brand from scratch. The luxury footwear market — worth $18 billion in 2016, according to Bain & Company — is dominated by household names that convey style, comfort and durability. In order for a new label to break through, it must convince consumers that its product not only looks good and feels good, but will also wear well and last long.

And yet, this lengthy list of “musts” didn’t stop Boston-based M.Gemi from launching in March 2015 with the aim to disrupt what can often feel like an impenetrable market. The direct-to-consumer brand is marching toward $50 million in annual revenue in 2017, having doubled sales each year since launch. Now, it has raised another $16 million to fuel growth.

The Series C round — which M.Gemi says will allow it to invest further in both predictive analytics tools and supply chain — was led by Burda Principal Investments, the investment arm of German company Hubert Burda Media, with contributions from previous investors Accel, General Catalyst Partners and Forerunner Ventures. The additional capital brings the total amount of funding M.Gemi has raised to date to $47.2 million.

Fashion can be a direct-response business. We believe in the power of predictability.

According to Burda Principal Investments managing director Christian Teichmann, it was M.Gemi’s use of data to win repeat customers, as well as its impressive factory network in Italy, that persuaded the firm — whose portfolio includes Etsy and Baublebar — to invest. “We are impressed by the brand’s combination of art and science and the expertise of the team at the helm,” said Teichmann in a statement. “With such compelling early success online and offline, M.Gemi has a tremendous opportunity to lead a monumental shift in the way brands think about the consumer and the global marketplace.”

Like many direct-to-consumer brands, M.Gemi — led by chief executive Ben Fischman, president Cheryl Kaplan and chief merchant Maria Gangemi — promises consumers high-end product (in this case, Italian-made leather shoes) for a fraction of what something of similar quality would cost in a department store. (In return, the markdowns are few and far between.)

For instance, a pair of pointy-toe ballet flats made in Toscana, Italy, cost $198 instead of well over $600. The company “drops” product — often a single style or capsule collection — each week, guaranteeing constant newness. While it doesn't outright own factories and has no current plans of acquiring one, the company has taken advantage of the fact that many smaller factories are in need of work. "There are so many factories that have excess capacity," Fischman says. "Part of our goal with the business is to support the small factory owners across the country of Italy that many companies had deserted over the years." The label's sleek designs appeal to a wide range of consumers and are along the lines of Stuart Weitzman or Gianvito Rossi.

Fischman says that M.Gemi consistently delivers on its promises, as well as key value adds, such as free shipping. That’s why it has garnered a Net Promoter Score — a stat that measures the willingness of customers to recommend a company's products or services to others — of between 83 and 85 out of 100. (In 2016, Apple’s Net Promoter Score was 70. Nordstrom’s was 75.) 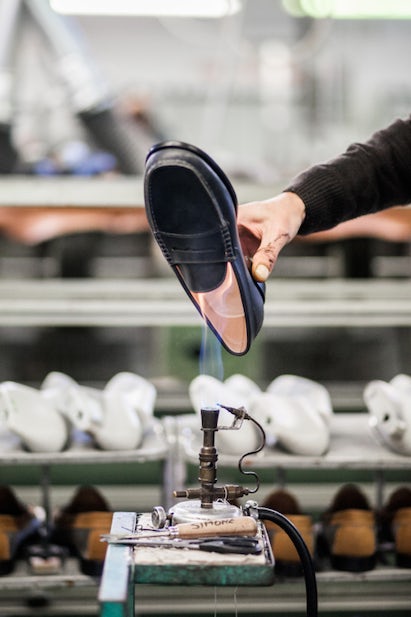 Inside the M.Gemi workshop | Source: Courtesy

The startup also uses data to figure out which pair of shoes a first-time shopper is likely to buy the second time around. For instance, the $198 “Cerchio” sneaker slide has a high “during-session” purchase rate, which means that consumers who clicked on an advertisement for the shoe were more likely to purchase it immediately. M.Gemi has determined which shoe styles consumers are likely to purchase after they buy the Cerchio, so it serves them marketing materials promoting those styles in response. Repeat customers average four purchases annually.

“Fashion can be a direct-response business,” Fischman says. “We strongly believe in the power of predictability.”

M.Gemi says it managed to shrink its customer acquisition costs — which decreased 60 percent year-on-year in 2016 — by replacing static advertisements with videos that offer the customer an inside look at the company’s factory partners. The 30-seconds-and-under videos — which can be viewed on Youtube as well — are produced at a relatively low-cost, in-house, with a quick turnaround time.

“Advertising blends in and it’s boring,” says Fischman, who uses the typical channels — Facebook, Instagram and Youtube — to woo customers in addition to organic, word-of-mouth referrals. “When we’re introducing a new product — the features and benefits of a great new shoe — video does a better job of telling stories than flat imagery or words alone.”

In 2017, along with the launch of its men’s line — which currently makes up 15 to 20 percent of the overall business — M.Gemi has made physical retail a priority. After experimenting with pop-up shops, the brand opened its first permanent store on Wooster Street in 2016, with a Boston location slated for late June and three-to-four more stores planned for the next twelve months. Fischman sees brick-and-mortar as a “customer acquisition vehicle,” as 85 percent of shoppers in the physical store make their second purchase online. “That is the dream,” he says. “If you’re only going in the store, that might be once a year or less. Our repeat customers are shopping four times per year.”

Fischman, who founded flash sales site Rue La La in 2007 and promptly sold it to GSI Commerce for $350 million in 2009 — long before the model’s limitations were clear to the broader market — has a knack for landing on the right idea at the right time. M.Gemi is part of Launch, a venture builder — also sometimes referred to as a "startup factory" — founded by Fischman that provides early-stage capital to startups. Launch’s ventures also including the children’s clothing subscription box company Rockets of Awesome and clean-beauty retailer Follain, and there are more brands in the pipeline.

As for M.Gemi’s own pipeline, international expansion seems the logical next step, especially given that it now has European investors. While international shipping is slated to go live in 2017, Fischman envisions a more localised approach in each region, with plans to set up European operations in the next 12 to 18 months. As for exploring other product categories? “Right now, we are completely focused on the shoe business,” he says. While he acknowledges greater opportunities in leather goods — without uttering the word handbag — “This is not a brand I see getting into ready-to-wear.”

However, what will likely demand the most attention from Fischman and his team in the coming years is building the M.Gemi brand, which must further establish itself in order to gain the devotion of a larger swath of consumers. (In September 2016, he hired Susan Cernek, a fashion journalist who also spent time at the head of the marketing teams at Madewell and Paddle8, as vice president of brand marketing and editorial.) “It’s the most expensive part of this business,” he says. “There are no shortcuts. You have to take the time to sweat the details.”

How Direct-to-Consumer brands are Disrupting the Global Eyewear Business

Op-Ed | The Future of America's Footwear Market Is Male