Despite Nike’s efforts, response to the reboot of its landmark Cortez running shoe has been underwhelming. By comparison, Adidas’ retro reissues sent the German company's market share skyward.

BEAVERTON, United States — In 1967, the company that would become the world famous shoe brand Nike needed an identity for its new, state-of-the-art running shoe.

Co-founders Phil Knight and Bill Bowerman settled on “Aztec,” according to Knight’s autobiography. But industry giant Adidas had a track spike called “Azteca Gold” and was allegedly threatening to sue.

Chewing over their choices, the Oregon entrepreneurs fired the first volley of a decades-long rivalry with the German shoemaker. Knight explained how their displeasure with Adidas led to the eventual selection. “Who was that guy who kicked the [crap] out of the Aztecs?” Bowerman asked Knight. “Cortez,” he responded. “Okay,” Bowerman said, “let’s call it the Cortez.”

In the 50 years since that fateful (if impolitic) branding decision, Nike became both commercial behemoth and cultural phenomenon, catering to the feet of athletes and couch potatoes alike.

But by last year, the tide of the long battle had turned. Adidas AG was once again ascendant via two sneakers originally designed in the 1960s: the Stan Smith and the Superstar. They outsold every other kick in America and sent Adidas’s share of the US footwear market skyward by 83 percent — with much of those gains swiped from Nike.

Beaverton, Oregon-based Nike Inc. was losing ground for the first time in decades. Future orders fell 4 percent in three months ended February, from both retail partners and the company’s own stores. Every geographic region, save emerging markets, posted a major drop in business.

Nike really needed a winner — a surefire hit that would once again fill sidewalks and stadiums with Swooshes, from the runways of SoHo to the pressure-sensing track that Knight bought for the University of Oregon. In September of last year, chief executive Mark Parker started laying the groundwork. He told analysts and investors that, like Adidas, Nike would look to past successes to win today’s market. The Cortez, he announced, would be making a comeback.

The reboot was big, even by Nike standards. In May, the company enlisted supermodel Bella Hadid for an elaborate photo shoot. First she reclined across the bench seat of a massive, Jimmy Carter-era car, the sneakers brilliant against the brown velour. Next she sat on a metallic-gold BMX bike, her shoes stuffed with white-cotton dad socks. Then she squatted down with a tiny skateboard, wearing a sports-bra and high-waisted, flared jeans, a nod to a decades-old shot of 1970s favourite Farrah Fawcett.

Sneakerhead blogs and fashion magazines ran the photos as a story unto themselves.

PARIS!! My @Nike Cortez launch tomorrow at the Nike Store Forum Des Halles! See you there 👟👟👟🤝🤝🤝

A few months later, Nike expanded the Cortez campaign, hiring Kendrick Lamar to be its pitchman, a partnership the musician blasted on social media with a plug for the old/new shoe.

Meanwhile, the company whipped its designers and factories up to speed, cranking out a steady stream of special Cortez editions to complement the classic iteration, with its red swoosh and blue stripe — what sneaker fanatics call “the Forest Gumps.” In May, there was the “Compton” colourway, flicking at the shoe’s popularity in Los Angeles street culture, and the “Kenny Moore” collection, a reference to an Oregon track star. In June, the company dropped a pair featuring its popular Flyknit upper material. In July, there was another collection, this time a collaboration with Mister Cartoon, a designer best known for celebrity tattoos and graffiti. Nike even stamped out a China edition, honouring the country’s first world champion in track.

Nike was in for a rude awakening. Despite all the effort, customers just didn’t seem to care.

Matt Powell, a sneaker analyst at NPD Group Inc., said Cortez sales this year have been “very minor,” even with the media blitz. “No retailer is talking to me about this shoe,” he said. Adding insult to injury is the cost of all this “demand creation,” eating up 10 percent of revenue. Hadid, Lamar and those excellent photographers don’t come cheap.

No retailer is talking to me about this shoe.

There are still plenty of Cortez kicks — both standard and esoteric — filling the shelves at Stadium Goods, which has two sneaker stores in lower Manhattan. “Some of the marketing push has definitely resonated,” said owner John McPheters. “Though it hasn’t turned it into a high-volume shoe for us.”

Nike declined to comment on the shoe’s fortunes or provide any sense of how much money it has spent on its Cortez campaign.

Of more concern than a dearth of sales, though, is the reboot’s poor showing on social media (Kendrick Lamar notwithstanding). Among 200 people whom analytics firm Traackr Inc. deems “influencers” in the sneaker market, the Cortez garnered a respectable volume of mentions this year, though not as many as the Air Max 97, its sibling sneaker. Of course, mentions are often purchased, particularly when “influencers” are involved. What’s more telling is engagement — the wider circle of dialogue that captures “likes,” reposts and comments. And this is where Adidas still shines with its Superstar shoe.

And that’s not the only good news for the German brand. In the middle of the Cortez rollout, Adidas overtook the Nike Jordan brand as the number two sneaker name in America. Andrew Raisman saw the buzz first-hand as he launched Copdate, an app that helps consumers reserve highly anticipated, limited-release shoes (rather than wait in line outside a store). Raisman said Adidas has been masterful in making its retro models relevant and stoking demand with so-called super-consumers, including fashion models and sneaker geeks. The main Nike brand is still number one, but that isn’t as much of a given as it once was.

“They’re the pretty girl of the dance today,” Raisman said of Adidas. “That’s one of the things that makes the Cortez release less white-hot than it could be. Five years ago, it would have been a different story.” 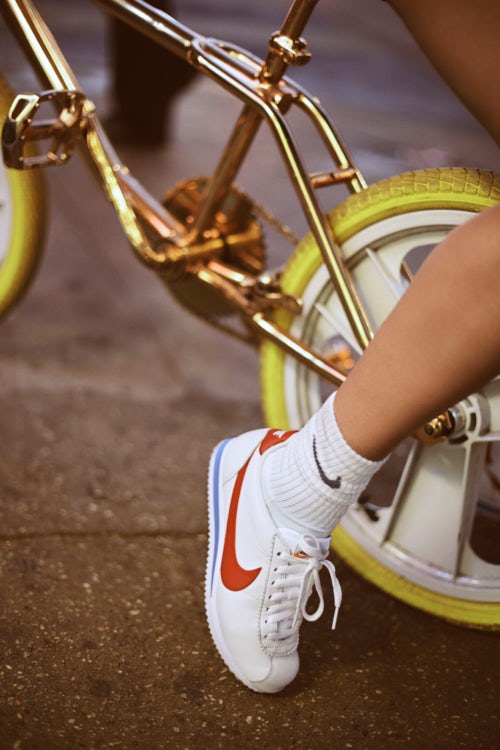 The failure of the Cortez to gain traction is doubly surprising because, after all, reintroducing an old shoe is a pretty low-risk strategy. The economics are attractive since demand has been proven and the cost structure is slim. The research and development process for a decades-old shoe such as Cortez is essentially an intern who said: “What if we made them in velvet?” (They did.)

Plus, the value on such old-school wheels lies in that history. The Cortez experiment is akin to Ferrari cranking out new versions of its 1962 race cars, since the shoe was the company’s premier product when Nike became Nike. “It really was the shoe that started it all,” said Jordan Geller, founder of the Shoezeum, dubbed the world’s greatest sneaker museum. At one time, Geller’s collection had 30 pairs of the Cortez, the dearest of which cost him $300. When he moved the Shoezeum to Las Vegas, he settled on a building next to the El Cortez hotel. “I considered it a good sign,” he said.

Financially, Nike said it’s still on track for $50 billion in sales, and it still has some of the hottest shoes on the market; this year, that includes the Roshe and the aforementioned Air Max 97. What’s worrisome is how little attention consumers appeared to have paid to its marketing.

In today’s media landscape, it’s tougher than it used to be to win on big, slick set pieces that blanket the landscape — the type of campaign that built Nike through Michael Jordan’s career. Now companies have to score in the run of play — having the right people in the right places making a series of small, skilful decisions on social media and in stores.

In rebooting the Stan Smith line, Adidas crafted a campaign that was more shaggy than slick. First, it quietly pulled them from the market. Then it shipped customised pairs to select celebrities as it prepared to ramp up production. The subtle approach helped accelerate “normcore” momentum the sneakers already had on the fashion circuit.

In the end, the Stan Smith caught fire because a famous designer casually wore a pair out on a Paris catwalk, no fancy photo shoot required. McPheters, at Stadium Goods, said the Air Max 97 reboot has been a hit in part because it was less hyped. “It’s not something they’ve been milking for years,” he said.

Nike, for its part, posted a further 3 percent drop in North American sales in September and said it would stop reporting future orders. A little more than a year after his initial announcement, chief executive Parker is no longer talking about the Cortez. He didn’t mention it during the company’s annual conclave with Wall Street analysts in October, though he called out several other models. In fact, the company only referenced “classic” styles twice that day, while it trumpeted “innovation” 96 times.

The future of Nike, Parker said, is in 3-D modelling, an accelerated system for designing new sneakers and being a company geared to “better serve the consumer personally, at scale.” In short, the company will increasingly react to its customer, rather than hope the opposite holds true. Its experience with the Cortez reboot — however inexpensive, given the company’s size — shows this to be a reasonable strategic pivot.

Still, Nike hasn’t given up on the old shoe entirely. The company is working on a new version of the Cortez with Lamar. The sneaker blogs are abuzz.