Following the departure of Stefan Larsson, the company has appointed Patrice Louvet as its new chief executive to help lead the latest efforts of its turnaround strategy. 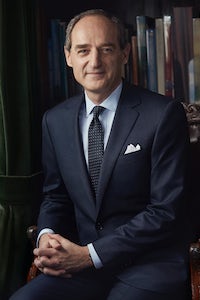 Following the departure of Stefan Larsson, the company has appointed Patrice Louvet as its new chief executive to help lead the latest efforts of its turnaround strategy.

Louvet, who starts on July 17, has served as the group president of global beauty at Procter & Gamble since February 2015. As a member of Ralph Lauren's board of directors, Louvet will report to executive chairman and chief creative officer, Ralph Lauren, and the rest of the board.

“Finding the right partner to work with me to take us forward in our evolution has been my primary focus over the last several months and I am thrilled that Patrice is joining our talented team,” said Lauren in a statement. “He’s an enormously skilled business leader with a deep passion for the consumer and a sophisticated understanding of building global brands. This, combined with his collaborative working style, transformation experience and intense focus on results, will put us in a stronger position as we move toward the future.”

While overseeing global beauty at Procter & Gamble, Louvet's brands delivered $11.5 billion in revenue in 2016. In his more than 25 years at the consumer goods corporation, he also lead the global grooming division, including Gillette, and the global prestige division of 23 brands, including Gucci and Hugo Boss.

In February, Ralph Lauren announced that its former president and chief executive, Stefan Larsson, would be leaving the company on May 1, following disagreements with Lauren over its turnaround strategy.

Last year, Larsson announced a round of severe cuts worth $180 million to $220 million per year on top of existing plans to reduce costs by $125 million.

In April, Ralph Lauren announced another set of key actions as part of the ongoing execution of its “Way Forward” plan to save an additional $140 million: the closure of 50 stores (including the Fifth Avenue Polo flagship), the loss of a reported 1,000 jobs and a restructure of leadership to remove three lines of management. It also announced a refocused attention on core lines and reduced production lead times.

Larsson was hired in November 2015 as the company’s first CEO after Lauren stepped away from the role for the first time. He was tasked with overhauling the American brand, which has struggled for years to address problems in e-commerce, wholesale and heavy discounting. Larsson focused on streamlining the business, helping it to transition towards a faster model favoured by younger consumers and introducing a “see now buy now” runway method last September.